What: Shares of beaten-down energy-related companies Clean Energy Fuels Corp (NASDAQ:CLNE) and Seadrill Ltd (NYSE:SDRL) are down 10.4% and 12.3%, respectively, at 3:50 p.m. ET on Jan. 25, and look almost guaranteed to finish trading today down by about those amounts. So far in 2016 it's been a lot of the same for both: 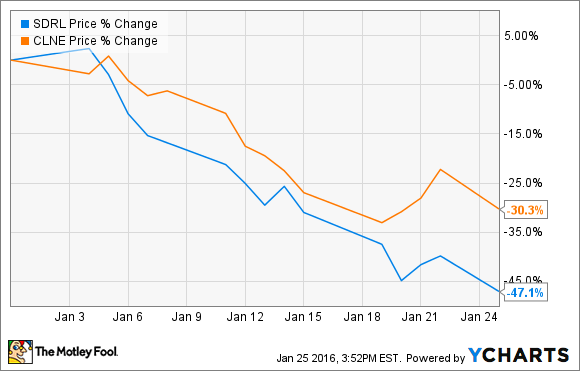 So what: It's all about oil prices for the most part. So far this year, crude oil prices have fallen close to 25% from the already-low prices from 2015, and today's 5.6% decline in Brent crude and 6.2% drop in the price of West Texas crude sent traders for the exits.

Now what: While one-day oil price movements won't really directly help or harm either Clean Energy Fuels or Seadrill, cheap oil isn't really good for either company's business. This is largely the case for both, but especially so for Seadrill.

Offshore drilling activity has slowed over the past year, and with more and more long-term contracts expiring with each passing month, and very little new work to replace them, Seadrill is on track for very rough seas in 2016. The company has made a number of steps to improve its situation, including delaying the majority of its newbuilds that were scheduled for 2016 delivery, but as the year progresses, its cash flows are at risk of falling. Plus, its debt load isn't going away anytime soon.

Clean Energy's core business of refueling natural gas vehicles may be more secure, since the fleets that it refuels won't suddenly get parked because oil prices have fallen. To the contrary, natural gas prices have also fallen sharply over the past year, so Clean Energy's customers are also seeing lower costs. At the same time, natural gas is still cheaper than diesel and gasoline in most markets, so it remains attractive, if not as attractive as it was 18 months ago.

However, Clean Energy is not cash-flow-positive, and slowing growth could make it more difficult for the company to get there while its balance sheet can support it. Seadrill, on the other hand, looks to have enough business under contract for the rest of 2016 to cover its operating costs and debt expense, without having to take on additional debt or burn through its cash pile, which has actually increased over the past year and now rests at more than $1.4 billion. Clean Energy's cash and equivalents has fallen to $166 million, and the company has $150 million in debt coming due midyear that it must deal with.

Put it all together, and both Clean Energy and Seadrill face a lot of uncertainty right now. It's likely that big swings in energy prices like today's will move both company's stocks plenty more times before the oil market stabilizes.