Please ensure Javascript is enabled for purposes of website accessibility
Log In Help Join The Motley Fool
Free Article Join Over 1 Million Premium Members And Get More In-Depth Stock Guidance and Research
By Ashraf Eassa - Jan 25, 2016 at 8:30AM

This Fool criticizes Intel management for not being as forthright as it could have been with investors about its chip manufacturing technology.

Whenever I hold stock in a publicly traded company, I am aware that things can go wrong, even when that company has done its very best. Sometimes companies are subject to forces completely out of their control, and I completely understand that.

What I find extremely distasteful is when a company's management team tries to paint an "overly rosy" picture of key aspects of its competitive positioning. This, I feel, is exactly what PC chip giant Intel (INTC 1.46%) has done, and continues to do, with respect to its public messaging around the competitiveness of its chip manufacturing technology. 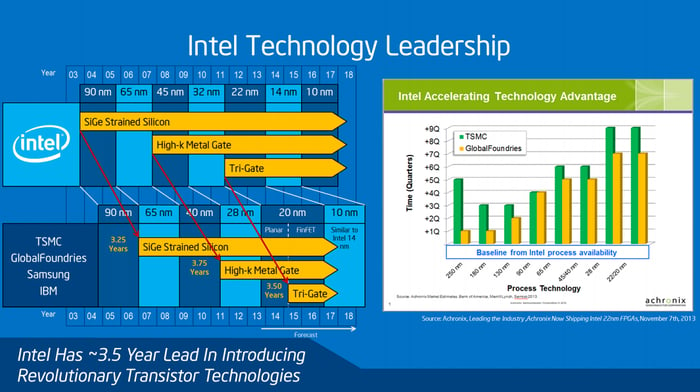 Note carefully that in this slide, Intel made the following claims/projections:

From this picture that Intel painted of the future, it was easy to have a lot of confidence in the company's manufacturing leadership.

At first glance, it would seem like everything is fine, no changes to the timing, right? What's interesting, though, is that at the 2013 investor meeting, Intel loudly and oh-so-proudly showed the slide that I included earlier in this article (indicating that 10-nanometer would begin production in 2015) as well as the following: 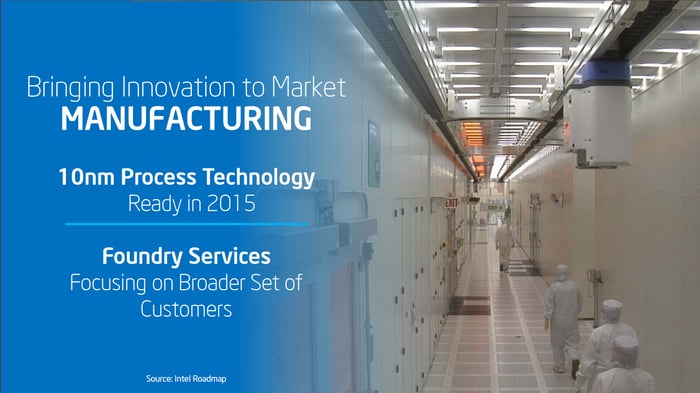 It would seem that Intel had already talked about its 10-nanometer timing -- just five months beforehand!

Then, during the company's Nov. 2014 investor meeting, during a question-and-answer session, analyst Doug Freedman asked the following question:

I find it interesting that we just heard your presentation and there was no mention of "Tick-Tock." When we look at where you're at, and when we look at the year that just occurred, your [factory] start-up charges clearly came in a little less than expected due to the 14-nanometer slower than expected ramp. How do we think about what you're planning on for 10-nanometer for next year and what, if any, would be the gives and takes to your start-up charges that you're counting on for next year?

Here's what Krzanich had to say:

We felt like we went out a little early with 14-nanometer as far as timing, performance, and features and we saw actually competitors adjust to that. So we're going to be a little more prudent, a little smarter about signaling to the industry when, what, and where and you'll just have to trust a little that the 50-year history we have with Moore's Law that we should be able to keep it going for 51, 52 years.

For the uninitiated, this seems perfectly reasonable, right? Well, it is, until you start looking back at previous claims.

First of all, didn't Intel itself say just a year prior that its 10-nanometer technology would be ready in 2015? Didn't it already "signal" to the industry "when, what, and where" when Holt spent a half hour telling everybody that Intel would get a greater-than-typical area reduction with 10-nanometer relative to 14-nanometer?

Then, in mid-2015, website BenchLife.info leaked to the Web Intel's plans for a third 14-nanometer processor family code-named Kaby Lake. The name "Kaby Lake" had actually been known for some time, with one AnandTech forum user spotting it in Intel's graphics drivers as early as March 2015, so clearly, this third 14-nanometer product had been in planning for quite some time.

It was not until the BenchLife.info leak that Intel decided to let investors know about the 14-nanometer Kaby Lake chip that it had been working on for quite some time. Given typical chip development timelines, it must have been known when Krzanich made that comment about keeping its plans under wraps and telling investors to "trust" Intel's history with Moore's Law.

As a very astute reader pointed out to me privately, the Irish Times put out a report in late 2012 revealing that about 600 Irish staff "were being trained on 14-nanometer tools in Arizona and New Mexico but are now returning home in December, several months ahead of schedule."

At the time, the report said the Irish workers were "worried" that Intel "might reconsider" building 14-nanometer chips at the Ireland plant. However, Intel's official statement on the matter, as reported in the Irish Times, was that the company had not changed its plans to introduce 14-nanometer at the manufacturing plant in Ireland.

The official statement gave the following reason for sending these people home:

We regularly make adjustments to our factory workforce to optimize the talent we have available, wherever the need arises and dependent on economic condition.

In hindsight, it's looking as though Intel sent those Irish expats home early because it knew the 14-nanometer technology was not in the shape it needed to be, meaning the production ramp itself would be delayed.

The Ireland factory appears to have ramped up manufacturing in the second quarter of 2015, based on the fact that Intel was recognizing the first wafer revenue from that plant in the third quarter of 2015.

Intel needs to be more honest with its shareholders
I recognize it's Intel's job to maximize shareholder value, which means it needs to control its public messaging in such a way so as to make investors "feel" as though everything is going great and according to plan.

However, while keeping investors in the dark about the struggles it is facing might be good for the share price in the near term, the truth necessarily comes out -- it's just a question of when.

I think Intel needs to be as forthcoming as possible when it comes to these key aspects of its competitive positioning. Investors who are investing their hard-earned dollars deserve to know exactly what they're buying into.