Utilities in the U.S. are facing more uncertainty than ever before as the energy landscape changes around them. Coal is dying, renewable energy is growing, and for the first time ever, hundreds of thousands of customers are generating their own energy with rooftop solar.

One company handling this challenge well is NextEra Energy (NYSE: NEE), partly because of its operating territory, and partly because of strategic moves it's made in recent years. Here's why I think this could be its best year ever.

A utility with growth
Florida Power & Light, NextEra Energy's major utility, has managed to grow kWh sales at a time when a lot of utilities are seeing stagnant demand. Third-quarter retail sales grew 2.6%, and that helped drive regulatory capital employed higher in 2015. Utilities make most of their money rate basing capital expenditures, so the more that's installed, the better it is for investors.

The risk to this growth is customers who decide to generate their own energy by installing rooftop solar. But Florida Power & Light -- like it or not -- has done a better job than almost any other southern U.S. utility in fighting off solar. That could change if consumer advocates get their way; but for now, the threat is minimal in the state.

Transitioning to the energy of the future
While Florida Power & Light is fighting off solar in its territory, NextEra Energy is investing heavily in renewable energy through NextEra Energy Resources and NextEra Energy Partners (NYSE: NEP). The former is the company's wholesale arm, which plans to add more than 3,771 MW of wind and solar power plants in 2015 and 2016. The subsidiary is now generating about a third of NextEra Energy's earnings each quarter.

NextEra Energy Partners is a yieldco that buys renewable energy projects with long-term contracts, and pays out dividends with the subsequent cash flow. And it's held up far better than most yieldcos on the market today.

The stock yields 3.9% with its current dividend payout of $1.08 on an annualized basis, meaning it could offer new shares to fund acquisitions that would be accretive to earnings and the dividend. That was the growth plan for yieldcos to begin with, but NextEra Energy Partners is one of only a few yieldcos with yields low enough to execute on that growth plan.

The combination of NextEra Energy Resources and NextEra Energy Partners gives NextEra Energy a big presence in renewable energy, which is the fastest-growing energy source in the world today. Given the uncertainty that utilities face from slowing demand growth and rooftop solar's growth, I think the move into renewables will be a wise one long term.

The Hawaiian Electric acquisition could be a boost
When NextEra Energy made a $4.3 billion bid to buy Hawaiian Electric Industries (NYSE: HE), it made a risky bet that it could become the utility of the future in Hawaii. HEI's territory has, by far, the highest adoption of rooftop solar in the country, and the utility had tried to add fees for solar customers that were rejected outright by Hawaiian regulators.

If it's going to complete the acquisition and build a profitable business in the process, it will need to develop the utility of the future. This means meeting Hawaii's 65% renewable target by 2030, and 100% by 2045.

The debate over the role of the electric utility in Hawaii is contentious, but if NextEra is successful, the acquisition could add a significant cash generator, and be a test center for how to build the utility of the future with components like energy storage and demand response. 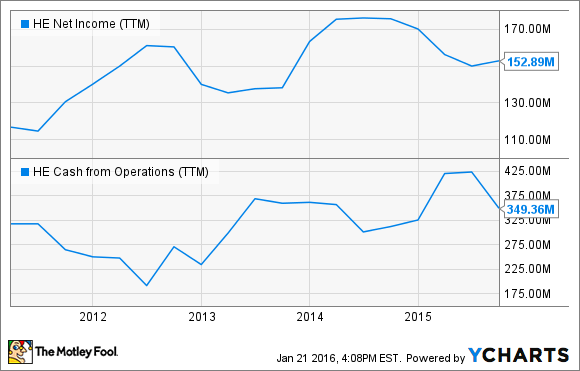 If NextEra Energy is going to have its best year ever, it will need the Hawaiian Electric deal to go through, and to make peace with regulators in the state. Hawaii is high potential with the highest electricity rates in the country, but customers have more energy options than anywhere else, and NextEra needs a solid plan to maintain profits in the state.

If Florida's electricity demand continues to grow, renewable energy assets keep being added to the balance sheet, and NextEra Energy can figure out a way to close the Hawaiian Electric Industries deal, it could be the company's best year ever.