After a major acquisition, now may not be the time to grow Molson Coors' dividend.

The beer industry has gone through a massive shakeup in the last year with Anheuser-Busch InBev NV agreeing to buy SABMiller for $106 billion. But hidden as part of that deal was SABMiller's need to sell its stake in MillerCoors, which it shared with Molson Coors (TAP 0.02%).

That sale has been agreed to with Molson Coors paying $12 billion for the 58% of MillerCoors it didn't own, transforming the company into the No. 2 brewer in the U.S. Investors are excited about the deal, as you can see below, but what does this mean for Molson Coors' dividend in 2016? 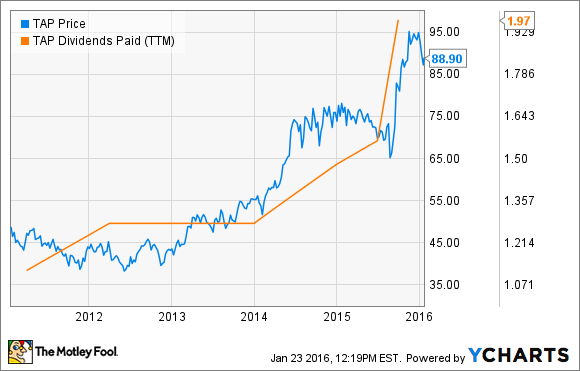 Beer isn't the business it once was
Owning two of the biggest beer brands in the world -- Miller and Coors -- will be good for Molson Coors, but there are bigger problems facing the beer business. Mega mergers have really been driven by the emergence of craft beer, which grew 17.6% in 2014 compared to overall beer volume growing just 0.5%. That has forced non-craft brands to consolidate their power to expand operating margins and get more leverage out of advertising dollars.

The result from a financial perspective is very low revenue growth, if any, and expanding margins because of lower operating costs. So, earnings are going up but not because big beer is getting any bigger.

The craft brew conundrum
As craft breweries and specialty products like cider have grown Molson Coors has had to buy its way into these markets. The Tenth and Blake Beer Company houses the craft beers that have been developed or acquired like Leinenkugel's, Blue Moon, and Crispin. But these brands will hit a ceiling for distribution eventually and then more brands will need to be acquired to grow. And acquiring growth is expensive.

Without organic growth, Molson Coors has to look for acquisitions to grow and when combined with lagging volumes for major brands like Miller and Coors there may not be much earnings growth ahead.

Is the dividend going up in 2016?
At the end of the day, having Miller and Coors under one umbrella should lead to greater margins and profits, even if revenue isn't growing. But that doesn't mean the dividend will rise in 2016. You can see below that dividend growth has outpaced earnings growth for the last decade and now the coverage ratio, or dividends paid compared to earnings per share, are starting to converge. 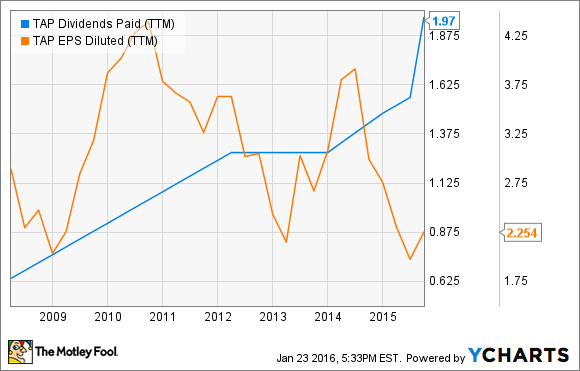 Given this convergence of earnings and dividend payouts, the need for cash to make future acquisitions, slowing core business growth, and the $12 billion cost to acquire the remaining stake of MillerCoors I think there are better uses for cash than growing the dividend.

Travis Hoium owns shares of Molson Coors Brewing Company. The Motley Fool has no position in any of the stocks mentioned. Try any of our Foolish newsletter services free for 30 days. We Fools may not all hold the same opinions, but we all believe that considering a diverse range of insights makes us better investors. The Motley Fool has a disclosure policy.