Please ensure Javascript is enabled for purposes of website accessibility
Log In Help Join The Motley Fool
Free Article Join Over 1 Million Premium Members And Get More In-Depth Stock Guidance and Research
By Reuben Gregg Brewer - Jan 26, 2016 at 7:50AM

Last year was one of change for Alcoa, but these deals show it's succeeding where it wants to.

Alcoa (AA) has been shifting its business toward making high-tech parts, with a major focus on the aerospace industry. Last year was a pivotal year in this transition. But the proof of the aluminum giant's success can be seen in the companies that are choosing to partner with it. Here are some of the big ones.

A different direction
The late 2015 announcement that Alcoa will be splitting in two was really the culmination of years' worth of hard work. The Upstream business, which is slated to keep the Alcoa name and makes aluminum, has been streamlined to the point where it's in better fighting shape to stand alone. But management has been building up what it's calling the Value Add business through acquisitions and expansion to the point where it can stand on its own two feet, too. This segment makes high-tech parts for a number of industries, but most importantly aerospace, roughly 40% of the division's business. 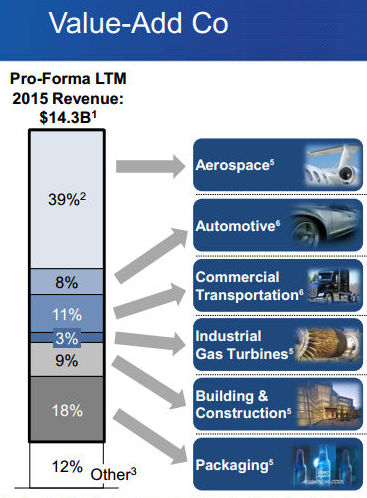 The aerospace sector is expected to grow quickly, at around 9% over the next few years. That's well above any of Value Add's other focus areas. So it's little wonder that Alcoa has been paying a lot of attention to aerospace. But just because a company shows a division some "love" doesn't mean it's going to succeed. The proof, as they say, is in the pudding. And 2015 showed that Alcoa has some pretty impressive pudding -- and it really got cooking in the final stanza of the year.

For example, in October, Alcoa signed a $1 billion deal with Airbus for aerospace fastening systems. That's not sexy, but holding a plane together while it's flying is important and its a big business. In fact, this is the largest deal between the two companies to date, with Alcoa's fasteners "flying" on every Airbus platform. In other words, Airbus trusts Alcoa enough to put its parts into every plane it sells.

Of note, this deal ensures Alcoa a place in some of Airbus' newest aircraft in addition to legacy planes. So this is really a forward-looking win for Alcoa, which will make parts from aluminum, titanium, and nickle for the European plane maker.

Back home
Not too long after the Airbus deal, Alcoa announced another billion-dollar deal, this one to supply Lockheed Martin (LMT 1.11%) with titanium for the F-35 Joint Strike Fighter. This is an expansion of an existing relationship between the two companies on this high-tech jet fighter.

What's most interesting about the Lockheed Martin deal, however, is that it's directly related to Alcoa's acquisition of RTI. That purchase, completed in 2015, expanded Alcoa's capabilities in the titanium space and is clearly showing benefits already as it deepens a key relationship in the aerospace industry.

Then, in mid-December, Alcoa landed another big fish, signing a $2.5 billion supply deal with Boeing (BA -0.63%), essentially the only major competitor to Airbus. This, too, was an extension of an existing relationship and happened partially because of the RTI deal.

Alcoa will supply Boeing with fastening systems and seat rack assemblies. Its offerings will show up on all Boeing platforms with this giant deal -- it's actually the largest fastener contract Alcoa has ever inked. But, equally important, the agreement ensures Alcoa a bigger spot in the supply chain for Boeing's newest aircraft, like the 777X, the aircraft maker's newest commercial offering, and the 737 MAX, which is expected to be ready in 2017. 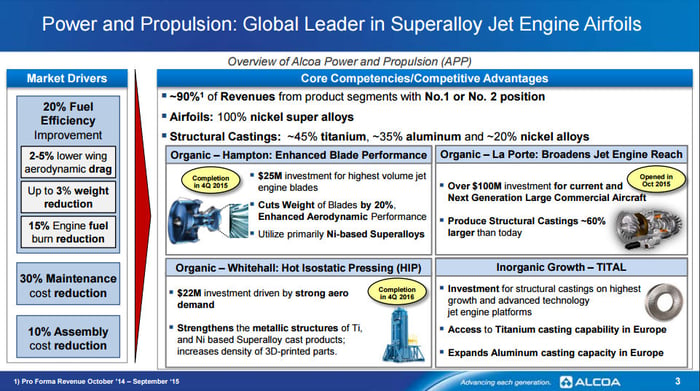 Some of Alcoa's strengths in the jet engine space. Source: Alcoa.

Closing on a strong "deal" note
And then, the last big deal of the year was announced with fourth-quarter earnings. Alcoa signed a $1.5 billion agreement to supply General Electric (GE -0.33%) with parts for its GE Aviation unit's engine business. Basically, GE is teaming up with Alcoa on the heart of the airplane, using the technologies that Alcoa built up as it readied for the big separation of its business into two parts.

But the headlines can often hide solid operating performance. For example, Mr. Market was glum on Alcoa's fourth-quarter results, which didn't live up to the market's expectations -- including soft Value Add results. So the GE deal kind of got overshadowed by quarterly results and the ongoing attention being paid to the pending split. But the GE deal, and all of the others in the quarter, are future looking agreements that position Value Add well for the future.

So the most important takeaway from the GE, Boeing, Lockheed, and Airbus deals is really that they show Alcoa's shift toward the aerospace market appears to be, pardon the pun, taking off. And that bodes well for the future, even if the headlines are filled with updates on the company's preparations for the pending separation of Upstream (old Alcoa) from Value Add and dour commentary about past results.

Reuben Brewer has no position in any stocks mentioned. The Motley Fool owns shares of General Electric Company. Try any of our Foolish newsletter services free for 30 days. We Fools may not all hold the same opinions, but we all believe that considering a diverse range of insights makes us better investors. The Motley Fool has a disclosure policy.