Please ensure Javascript is enabled for purposes of website accessibility
Log In Help Join The Motley Fool
Free Article Join Over 1 Million Premium Members And Get More In-Depth Stock Guidance and Research
By Daniel Miller - Jan 26, 2016 at 7:00AM

FCA is buying itself time to adapt to more strict emissions regulations, but substantial changes will be required going forward.

If there's one thing Fiat Chrysler Automobiles (FCAU) has been good at in recent years, unfortunately for investors, is that it's good at trailing behind Detroit's two largest automakers in a number of categories. FCA has typically lagged behind in quality studies, and in my opinion, it lags behind Ford Motor Company (F 3.06%) and General Motors (GM 3.63%) in adapting its business for the future.

For instance, FCA recently checked in dead-last in a 2014 Environmental Protection Agency ranking of carbon-dioxide emissions among major automakers. It gets worse; it was actually the fourth consecutive year that FCA finished dead last in the survey.

Let's take a look at why FCA is trailing its competitors -- and what it can do about it.

Biggest losers/winners
When looking at this graph, it's important to keep in mind that this is for the 2014 model year, and that 2015 model year data won't be finalized until next year's report -- though, I will share preliminary 2015 data later. 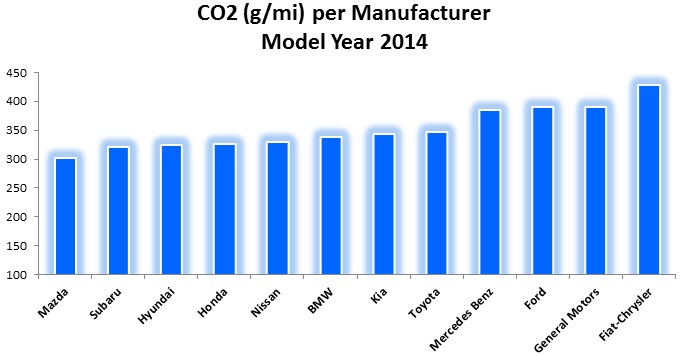 It's not much of a surprise that Detroit automakers are at the tail end of this graph, because all three dominate the full-size truck segment. The full-size truck segment produces the top two best-selling vehicles in the U.S. virtually every year, the F-Series and Silverado, and the Ram is generally around third place. Because those vehicles have poor fuel economy and sell in vast numbers, it weighs down the scores of Detroit automakers. Further, when comparing those three automakers, FCA also generates about 78% of its U.S. sales volume on light-duty trucks, compared to about 70% and 69% at General Motors and Ford, respectively.

Because of FCA's reliance on its Jeep and Ram truck brands for sales gains, it's going to continue to check in at the tail end of these EPA studies. However, looking at preliminary data, which is far from finalized, there are a couple of interesting takeaways.

So what?
The might be first time investors have even heard of FCA checking in dead-last in the EPA report, despite it being the fourth consecutive year, so is it even a big deal? It is unsustainable, and FCA could eventually be forced to sell fewer of its light-duty trucks, which generate a majority of its profits in North America.

"FCA doesn't have the resources to fulfill the emissions requirements," said Maryann Keller, an independent auto-industry consultant in Stamford, Conn, according to Bloomberg. "It's not a company that can survive in its present form."

It gets even more depressing for FCA investors when you consider that the automaker will somehow have to meet increasingly higher fuel-economy targets by 2025, which call for average miles per gallon to jump 50% to 54.5 mpg -- ouch.

What's FCA going to do?
Thus far, FCA's strategy has been pretty clear: save up emissions credits. Basically, FCA is trying to buy itself some extra time to meet emissions standards. The EPA offers credits to companies that produce fewer emissions than they're allowed by regulations, and those companies have the option to sell those credits to companies over the emissions cap. Currently, FCA is still operating under its cap, but it's loading up on credits for a time when it can't accomplish that feat.

Tesla Motors, for instance, sold all of its 2013 and 2014 emissions credits to FCA, and the latter also purchased a total of 8.2 million megagrams of emissions credits in 2014 -- more than six times the second-biggest buyers.

Make no mistake: While FCA's stockpile of 13.8 million credits, as of September 2014, will help in the near term, if FCA doesn't improve the fuel economy of its SUVs and full-size trucks in a meaningful way, or better adapt its business to successfully selling smaller vehicles, it's going to be a painful long term for its North American profit engine.