Promises of free cash flow are wonderful. Actually producing some cash would be better. 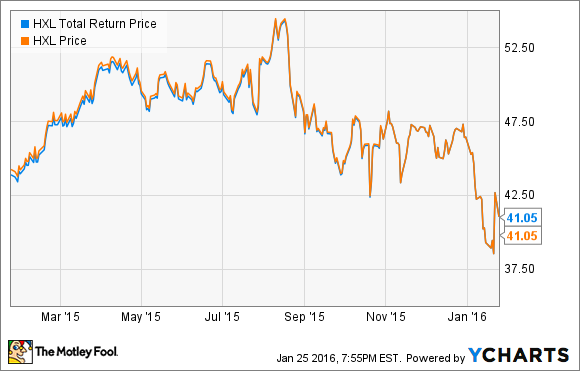 A booming aerospace market lent Hexcel shares support last year -- but the stock has sunk along with everything else in 2016. HXL Total Return Price data by YCharts.

Booming plane sales around the globe helped buoy shares of Hexcel Corporation (NYSE: HXL) last year. But as the stock market sank in the early weeks of 2016, shares of the aircraft structural materials specialist fell in tandem -- up until Hexcel released its earnings last week, that is.

On the minus side, free cash flow turned negative for the year, with capital spending of $305 million eating up all $301 million in cash from operations. Commenting on the results, CEO Nick Stanage characterized even this disappointing result as a positive, arguing that the cash generated was at least sufficient to pay for "capital expenditures for continued capacity expansion to support our strong growth."

But I'm not buying it.

What comes next?
"Strong growth" in what, after all, is the real question here. Hexcel says that, with the help of new revenue from Airbus's growing A350 XWB and A320neo programs, it hopes to see revenue rise 8.5% in 2016, yielding full-year sales of $1.97 billion to $2.07 billion. Adjusted profits are expected to rise 5% to 10%.

Management did not provide guidance on projected net profits. But based on the midpoint of that guidance range, it would appear that profit margin expansion is not in the cards, and profits will grow only in line with revenue this year.

Finally, the company expects to return to cash-profitability, if only just barely. Hexcel targets free cash flow somewhere between $20 million and $60 million, implying a level of cash profitability that might equal what it generated in 2014 -- but probably won't.

What comes after what comes next?
Longer term, of course, the hope is that all this capital spending will pay off -- say, around about 2020 -- in supporting annual sales of $3 billion, and net profits of $4.50 per share.

What it means to investors
With Hexcel currently valued at $4.5 billion in enterprise value, that works out to an EV/FCF ratio of14.4 in the "good" years of 2017-2019, and 22.5 times FCF across the entire five-year period. Unfortunately, neither of those valuations look particularly attractive in light of consensus analyst expectations for 11% annualized profit growth over the next five years.

Accordingly, I'm at a bit of a loss to explain investors' enthusiasm for Hexcel stock, as reflected in the 10% surge in stock price that followed last week's earnings report. Simply put, no matter how well 2015 worked out for Hexcel, this stock is no bargain.