Rumors of the death of transportation are greatly exaggerated. The consumer is helping keep demand flowing, and fuel surcharge changes are masking the underlying metrics in transportation and package delivery companies such as United Parcel Service.

Reasons to be fearful
There are three key themes to look out for in the transportation sector:

I'll deal in turn with how the three themes played out, but first it's useful to break down how J.B. Hunt earns money. 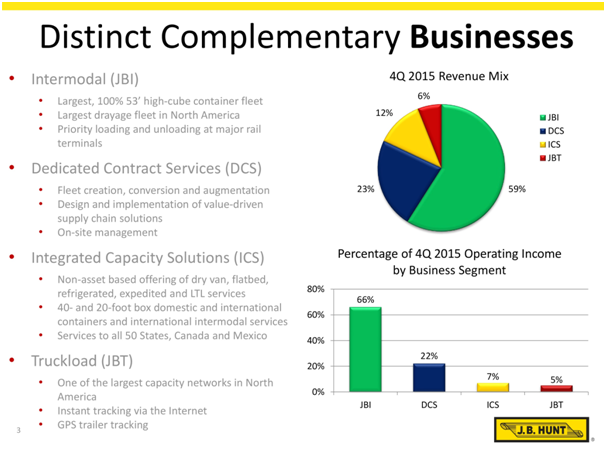 End demand?
The company's fourth-quarter revenue and earnings were pretty much in line with analyst estimates, so it doesn't look as if the economy tailed off more than expected. Moreover, the evidence from the intermodal segment results is that growth in other areas of the economy is helping offset weakness in the industrial sector. Although intermodal revenue increased only 1% (and segment operating income fell 1%) in the fourth quarter, the underlying end-demand picture is better.

For example, intermodal total volume increased 6% in the quarter, with revenue per load excluding fuel surcharges increasing 5% compared with the same period last year -- a key point, because J.B. Hunt increased its average intermodal tractors by 8.3% in the fourth quarter compared to last year. In other words, the intermodal revenue increase wasn't just due to an increase in tractors.

Intermodal operating profit fell largely because of "increases in rail purchased transportation costs, equipment ownership costs, and driver recruiting and retention costs," according to the earnings release. While this is problematic for J.B. Hunt, it doesn't speak to weakness in end demand.

Frankly, these are worrying trends, but investors should note a couple of points:

Clearly, fuel price changes played a part in making J.B. Hunt's operating numbers look worse than they might have been, so let's focus on it a bit.

Oil impacts
The impact of lower fuel surcharges has reduced revenue per package growth at UPS, and J.B. Hunt has similarly been affected. Here's what the impact of oil looks like:

The data clearly shows that the reduction in fuel costs of some $32 million wasn't enough to offset the $116 million reduction from lower fuel surcharges.

However, excluding fuel surcharges, operating revenue increased 9.5%. Given that J.B. Hunt plans a similar level of capital expenditure for 2016 ($570 million, compared with $556 million in 2015), this creates confidence that the implied growth investments will produce the 9% to 12% revenue increase the company forecasts. Naturally, my commentary is assuming that oil prices don't deteriorate further.

Looking back, looking ahead
While growth in the industrial and commodity sectors slowed in the second half of 2016, it appears that other parts of the economy have grown enough to offset significant deterioration in at least some U.S.-focused transportation companies.

Moreover, the impact of fuel surcharges on transportation and package delivery companies such as UPS is often underestimated. If oil prices are flat compared with last year, then companies in the sector will start to see underlying revenue growth showing up in their headline numbers, and the market usually rewards such things. Despite the gloom in the markets, the U.S. transportation sector isn't dead yet.

Lee Samaha has no position in any stocks mentioned. The Motley Fool recommends United Parcel Service. Try any of our Foolish newsletter services free for 30 days. We Fools may not all hold the same opinions, but we all believe that considering a diverse range of insights makes us better investors. The Motley Fool has a disclosure policy.