The lift- and handling-equipment maker has a planned merger with Konecranes already in the works, but a buyout offer from Zoomlion complicates things a bit.

What: Shares of crane-, lift- and handling-equipment manufacturer Terex Corporation (TEX -3.12%) are up huge today, following an unsolicited buyout bid from Zoomlion, one of China's biggest crane manufacturers. Even after this spike, shares are trading down about 8% since August, when Terex announced that it was merging with Finnish Konecranes, and would relocate its corporate headquarters to Finland: 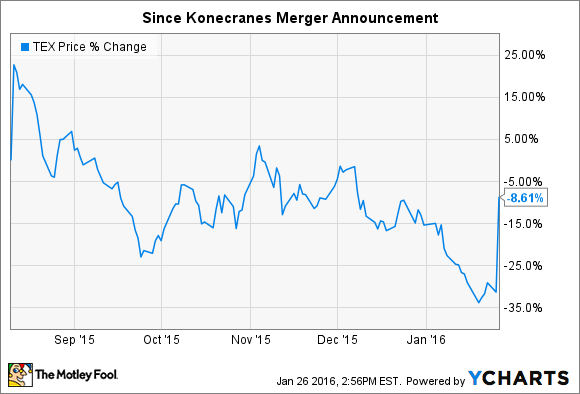 So what: Today's spike is tied to the enormity of the offer, which values Terex at $30 per share. Terex shares were trading closer to $15 before news of the buyout was made public. The stock is around $20 per share in afternoon trading, well below the offer price, indicating that Mr. Market seems to doubt that the deal has much chance of happening as-is.

After all, a company like Terex makes some of the most critical equipment used in American shipping, in the cranes and material-handling equipment used at many of the ports where goods enter and leave U.S. shores. This alone could be enough to prevent American regulators from allowing the deal to happen -- at any price.

Now what: The first question is what happens next. The rumors are that Terex has already rebuffed Zoomlion's offer, but the company hasn't made any public statement beyond confirming that the offer was made, and that it has entered into a confidentiality agreement with Zoomlion.

It's possible that the company shops the offer for one from a competitor in the West, but it's just as likely the company simply moves on with its pending merger with Konecranes, and remains independent. After all, the $30-per-share price Zoomlion has offered may seem like a huge premium, but Terex shares traded for nearly $30 as recently as this past summer, and have fallen on cyclical weakness as demand for the company's equipment has weakened in the current global economic slowdown. Its stock traded above $40 as recently as 2014.

Terex shareholders would hold 60% of the combined Konecranes Terex company, which is being funded as an all-stock transaction, so it could be in their best interest if management simply moves beyond the Zoomlion offer, completes its merger with Konecranes, and works through the current environment.

At this point, all bets are off as to what actually happens. And unless you're willing to invest based on the potential of Terex's underlying business and the market recovering over time, investing on what happens next with this latest wrinkle is no better than flipping a coin.

Jason Hall has no position in any stocks mentioned. The Motley Fool recommends Terex. Try any of our Foolish newsletter services free for 30 days. We Fools may not all hold the same opinions, but we all believe that considering a diverse range of insights makes us better investors. The Motley Fool has a disclosure policy.

Why Terex Corporation Slumped More Than 12% in August