Please ensure Javascript is enabled for purposes of website accessibility
Log In Help Join The Motley Fool
Free Article Join Over 1 Million Premium Members And Get More In-Depth Stock Guidance and Research
By Travis Hoium - Jan 26, 2016 at 7:00AM

A marriage between ride sharing and manufacturing expertise could make for a surprise winner in the auto industry.

Driverless cars are now an inevitable technology for the auto industry, and they're not as far off as you may think. Google has put over 1 million miles on its driverless vehicles, BMW has been testing them for years, Uber is building driverless technology, Tesla Motors (TSLA -0.97%) has launched driverless technologies, and Apple reportedly has its own car program.

But the key to the driverless car revolution may come from one of the old guard in Detroit's auto industry.

How driverless cars will take shape
For there to be a major market for driverless cars I -- and many leaders in the auto industry -- think it will have to be driven by ride sharing platforms, not regular vehicle sales.

The average vehicle sits unused 96% of the time, and if ride sharing companies can increase a vehicle's utilization and reduce their own costs far enough -- mainly by eliminating the driver -- they could make it attractive enough for consumers to go without a car. That's the vision General Motors (GM -1.46%) laid out when it made a $500 million investment in Lyft, and it's why GM could be a great way to invest in the driverless revolution.

Infrastructure is the hard part
When companies like Google, Uber, or Apple start talking about driverless vehicles, they do so from a technology perspective. None of them have laid out how the manufacturing infrastructure would work if they get into the auto business, and that might be the hardest part.

Tesla Motors is finding out the hard way that it's very difficult and costly to start an automaker from scratch. The company has been all the rage on the stock market, but operationally, it's burning through billions in cash in the process. That may not be an attractive option for the companies I mentioned above that are doing research in the industry. 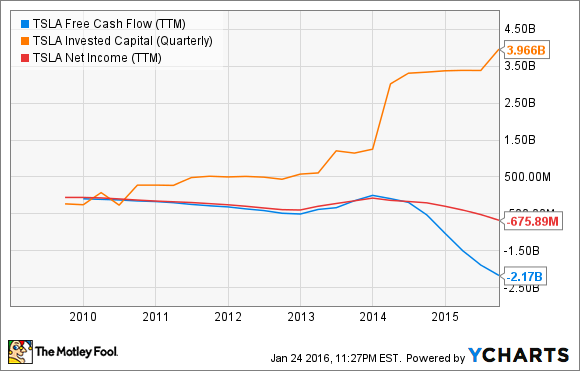 What GM brings to the table is the infrastructure to build the actual vehicles. What it needs is the ride sharing platform and the captive demand it would bring if it's going to replace the car ownership model.

What GM needs to go driverless
The reason Uber and Lyft are in such a war for drivers and customers today is that they need to build a massive platform to be successful. The more customers you have, the more drivers you can attract, which brings more consumers, and on and on. Once you have access to hundreds of millions of customers, you can replace drivers to save costs and have a network that would be very difficult for a competitor to replicate.

What automakers lack today is access to that ride-sharing platform, and it would be very difficult for them to build such a platform on their own. So, GM needs Lyft's platform just a much as Lyft may eventually need GM's manufacturing expertise to build vehicles. It's a natural marriage to build the future of the auto industry.

Why this is a good deal for investors
The auto industry isn't going to be upended overnight by a few start-ups that decide to make a ride-sharing program or a driverless vehicle. There's just too much infrastructure that goes into making a vehicle to think the industry will be replaced that quickly. That gives forward-looking automakers an advantage as innovative technologies like driverless cars come to the market. But companies still have to be forward-thinking enough to see them.

I think GM's partnership with Lyft and its advancements in launching electric vehicles show that it's serious about developing the technologies it'll take to win for the next century. And that's why it's my pick for a stock that can win from the driverless car industry.