US Bancorp (NYSE:USB), also known as U.S. Bank, has a well-deserved reputation for being one of the best banks in the United States. The bank is the most efficient and profitable of the big banks, and has one of the highest-quality loan portfolios in the business. As a result, the bank has been able to grow its dividend at an impressive rate in the post-crisis era, and shareholders may be wondering whether this trend will continue in 2016.

Two of the best predictors of dividend growth are a company's history of dividend increases and the current growth of its business. US Bancorp looks good in both of these areas.

In contrast to several other large U.S. financial institutions whose dividends are still extremely small, US Bancorp has been able to steadily increase its dividend since the end of the financial crisis. Its payout was increased by 4.7% in 2015, and has risen by a total of 104% over the past five years. 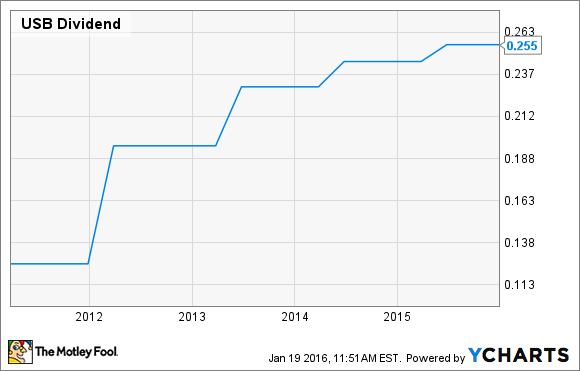 US Bancorp prides itself on returning the majority of its capital to shareholders, and paid out 72% of its earnings in 2015 as dividends and share buybacks. So, it's safe to say that if it makes sense to increase its dividend, US Bancorp is willing to do just that.

As far as the numbers are concerned, the prospects of a 2016 dividend increase look good. In 2015, the bank produced its highest net income and earnings per share ever, and the bank continued its record of producing industry-leading return on assets (ROA) and return on equity (ROE).

US Bancorp's fourth-quarter revenue was the bank's highest ever, thanks to 4.2% year-over-year loan growth, 6.9% deposit growth, and a drop in the loan delinquency rate from 0.97% of the portfolio to just 0.78%. Credit card and debit card revenue grew by 8.1%, and the bank is beginning a new venture in partnership with Fidelity, which will make US Bancorp the exclusive issuer of two Fidelity-branded credit card products.

Management is optimistic about 2016
Basically, US Bancorp feels that it delivered exceptional performance in 2015, considering the persistent low-interest-rate environment and sluggish economic growth, and that there is opportunity for 2016 to be an excellent year.

In its quarterly press release, US Bancorp President and CEO Richard Davis said, "We are well positioned as we move into 2016 -- as indicated by our record fourth-quarter revenue, strong momentum toward positive operating leverage during the quarter, and the continued stability in our net interest margin." He went on to express his optimism about the growth momentum in many of U.S. Bank's core businesses, such as the payment services (credit cards) developments I mentioned earlier.

Will US Bancorp Raise Its Dividend in 2016? @themotleyfool #stocks $USB Next Article
Current