The last year has been brutal for Western Digital (NASDAQ:WDC) investors. Shares of the hard drive-maker have plunged more than 55% in the last 12 months, badly underperforming the broader S&P 500. 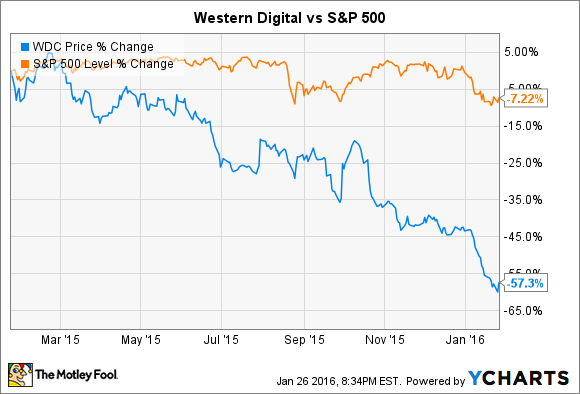 At current levels, Western Digital appears intriguing, if for nothing other than its valuation. With a single-digit price-to-earnings ratio, and a dividend yield of about 4.4%, Western Digital looks attractive. But looks can be deceiving. Below are three reasons why Western Digital stock could be headed even lower. While a general market rally could always lift shares even if all three scenarios come to pass, they aren't likely to excite Western Digital investors.

PC sales could continue to fall
Western Digital remains dependent on the market for traditional PCs. If you purchase a new desktop or laptop computer, there's a good chance it will come equipped with a Western Digital hard drive. Last quarter, about 34% of the company's revenue came from PCs. Western Digital has been working to shift its business away from the PC in recent years, and while it's been successful (PC-related revenue generated a massive 66% of revenue in fiscal year 2012), for the time being, PC sales remain vital to the firm.

Sales of traditional PCs have been declining for most of the last five years. Last quarter in particular saw PC shipments fall 8.3% on an annual basis, according to research firm Gartner. In total, PC shipments fell 8% in 2015, and Gartner expects the market to contract another 1% in 2016.

Western Digital's management isn't overly optimistic, but the company made some positive remarks during its earnings call in October. "[In terms of] the PC market, we are continuing to see some signs of stabilization in demand," said Western Digital CEO Steve Milligan on the company's October earnings call.

Even as it works to diversify, falling PC sales could weigh on Western Digital's performance.

SanDisk itself has struggled over the last 12 months -- even with Western Digital's pending offer, shares are down nearly 20% in the last year. In the September quarter, revenue fell 17% on an annual basis.

Western Digital expects its acquisition of SanDisk to enhance its growth. "Do we expect the SanDisk business to grow over time?" Milligan asked on the company's October earnings call. "The answer to that is yes." Milligan drew particular attention to SanDisk's solid state drives, but also cited growth in mobile devices, including tablets and smartphones.

The demand for client solid state drives -- which are used in higher-end desktop and laptop computers -- is tied to the PC market, and is therefore susceptible to falling PC demand. Sales of solid state drives generated about 29% of SanDisk's revenue in fiscal year 2014. SanDisk's mobile solutions, meanwhile, generated about 22% of revenue. Sales of smartphones and tablets have been outpacing demand for traditional PCs, but have also showed some signs of weakness. Last month, research firm IDC forecast that total smartphone shipments would rise in 2015, but that the growth rate would fall into the low single-digits.

Falling demand for flash storage could undermine the combined company.

The Unisplendour deal could fall through
It's worth noting that, while it's expected to close, Western Digital's deal to acquire SanDisk hasn't gone through yet. It may not close at all if another separate (yet related) deal falls through.

Back in September, China's Unisplendour Corporation announced that it would acquire about 15% of Western Digital. The proceeds from the deal would go toward strengthening Western Digital's balance sheet, and ultimately allow it to acquire SanDisk. The problem for Western Digital investors is that the Committee on Foreign Investment in the United States (CFIUS) needs to approve the Unisplendour deal. It's a different situation, but earlier this month, Philips announced that it had cancelled a deal to sell a majority stake in its LED business to an Asian investment group after the CFIUS raised concerns. Citing problems with the CFIUS, analysts at Credit Agricole warned that the Unisplendour deal is looking increasingly shaky.

News of the Unisplendour deal sent shares of Western Digital rising when it was announced last fall. If that deal falls through, it could have the opposite effect.