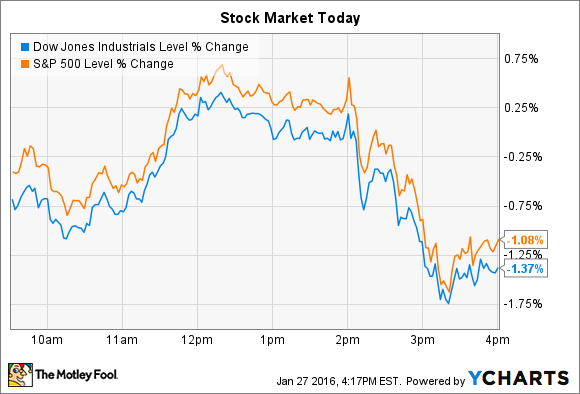 Indexes turned lower after the Federal Reserve said in a statement that Fed officials are "closely monitoring global economic and financial developments" for data that will inform their next key rate-setting decision in March . The central bank's December projections saw rates rising to 1.4% by the end of 2016, but new data on slowing economic growth could change that pace .

Weak quarterly reports also added to the bearish mood for stocks, as giants Apple (AAPL -0.40%) and Boeing (BA 0.24%) both fell after announcing their fourth-quarter earnings figures.

Apple braces for a downturn
Apple's stock plunged 6% after the tech giant posted record sales and profits for the quarter ended on December 26, 2015. As CEO Tim Cook predicted three months ago, the iPhone business grew – but only by the smallest of margins -- as Apple sold 74.8 million iPhones compared to the prior year's 74.5 million units .

There was plenty for shareholders to cheer in these results, including an uptick in profitability, spiking services revenue, and a cash pile that grew to a whopping $216 billion. Investors instead chose to focus on Apple's cautious outlook. In the earnings conference call, Cook warned of challenging economic conditions in major markets including Brazil, Russia, Japan, and, for the first time, China. The company's projection for the current quarter called for sales of just $51.5 billion at the midpoint of guidance, below last year's $58 billion and below consensus estimates of $55.6 billion.

With the stock down 20% in the past three months, management could unleash some of its cash hoard to ramp up share repurchase spending. Meanwhile, executives said their main focus will be on placing aggressive innovation bets through R&D and capital expenditures, since those tend to pay off during times of global demand slumps. "Some of the most important breakthrough products in Apple's history were born as a result of investing through the downturn," Cook said.

Yet Boeing's outlook for the year ahead spooked investors. The company forecast a double-digit profit decline to $8.25 per share from last year's $9.33 per share haul. Revenue is also expected to fall significantly as the company expects to deliver just 745 commercial airplanes, compared to 2015's 762 deliveries .

On the plus side, management expects operating cash flow to improve over last year's result to reach a stellar $10 billion. That growth should help Boeing fund increasing cash returns to shareholders even if operating trends turn slightly lower this year. Bigger picture, management is focused on working through its diverse $500 billion backlog over the next few years. "We are well positioned for profitable growth and higher cash flow as we move into our second century in business," CEO Dennis Muilenburg said in a press release.

Demitrios Kalogeropoulos owns shares of Apple. The Motley Fool owns shares of and recommends Apple. Try any of our Foolish newsletter services free for 30 days. We Fools may not all hold the same opinions, but we all believe that considering a diverse range of insights makes us better investors. The Motley Fool has a disclosure policy.