Please ensure Javascript is enabled for purposes of website accessibility
Log In Help Join The Motley Fool
Free Article Join Over 1 Million Premium Members And Get More In-Depth Stock Guidance and Research
By Adam Levine-Weinberg - Jan 27, 2016 at 9:53AM

Boeing delivered a strong Q4 earnings performance, aside from a one-time charge.

2015 was another successful year for aerospace giant Boeing (BA 0.52%). On Wednesday, the company reported core earnings per share well ahead of expectations and solid results for both of its main business segments -- excluding a special charge related to a planned production cut for the 747 jumbo-jet.

Demand for Boeing's 747 jumbo jet has petered out.

On the other hand, Boeing's guidance for 2016 was sobering. However, the company has a habit of issuing very conservative guidance at the beginning of each year, which it then beats. From that perspective, Boeing seems to be on track to continue its steady growth.

Boeing earnings by the numbers
In the fourth quarter, Boeing generated revenue of $23.57 billion, down slightly from $24.47 billion a year earlier. This was almost exactly in line with analysts' average revenue estimate of $23.55 billion. For the full year, revenue was up 6% to $96.11 billion.

Boeing's earnings performance was significantly affected by a one-time charge of $0.84/share. Sluggish demand in the global air cargo market is forcing Boeing to cut 747 production this year. The production rate, already scheduled to decline from 1.3 per month to 1 per month in March, will now fall to 0.5 per month in September.

Boeing's commercial airplanes division delivered 182 planes during the fourth quarter, down from 195 a year earlier. This drove single-digit declines in revenue and earnings (again excluding the 747 charge). For the full year, though, deliveries increased from 723 to 762, driving 10% revenue growth and 2% earnings growth, excluding a pair of one-time charges.

Meanwhile, the defense business, which has been shrinking in recent years, stabilized its performance in 2015. Segment revenue and segment earnings were up 3% and 5%, respectively, in Q4. For the full year, revenue declined just 2%, and segment earnings rose 5% despite a $322 million special charge related to cost overruns on the KC-46 military tanker program.

Cash flow keeps growing
While Boeing's earnings numbers often get the bulk of investors' attention, its cash flow production is arguably more important, and that's because Boeing has incurred tens of billions of dollars in cash losses on production of the first several hundred 787 Dreamliner jets. Boeing's inventory has swelled by about $40 billion in the past decade because of the resulting deferred production costs. 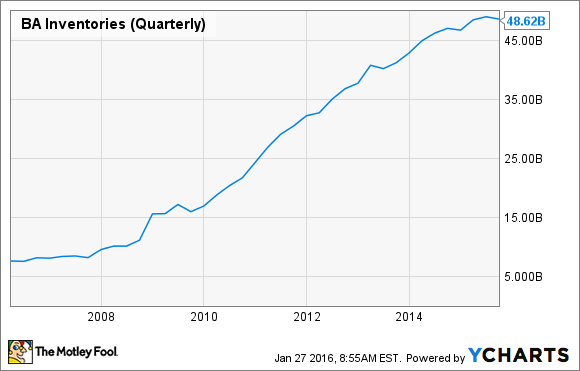 Looking ahead
Boeing forecast modest revenue declines for both its commercial airplanes and defense segments in 2016. Its core EPS guidance of $8.15 to $8.35 would be down more than 10% from the $9.33 in core EPS Boeing generated in 2015, excluding the two special charges noted above.

Production increases will drive faster growth for Boeing in 2017 and beyond. Image source: Boeing.

However, it is important to recognize that Boeing routinely provides extremely conservative guidance to start the year. At the beginning of 2015, Boeing forecast full-year core EPS of $8.20 to $8.40 -- essentially the same as its 2016 guidance.

Furthermore, because of the timing of Boeing's planned production increases, growth in the commercial airplanes segment should reaccelerate beginning in 2017. That should enable stronger EPS growth for the next several years.

Most importantly, Boeing expects to produce about $10 billion of operating cash flow in 2016. This implies a return to solid cash flow growth, especially if this estimate is also conservative.

Investors clearly weren't pleased with the outlook, as Boeing stock declined about 6% in pre-market trading. This could be a good entry point for long-term investors, though. With cash flow on the rise and the stock nearing its 52-week low, Boeing may return more cash than ever to investors in 2016, with further dividend and buyback increases likely in the coming years.