What: Shares of Hawaiian Airlines parent company Hawaiian Holdings (HA -2.97%) are up more than 13% at 1 p.m. EST on January 27, following the after-hours release of the company's fourth-quarter and full-year 2015 financial results yesterday afternoon. With today's big gain, the company's stock is up nearly 4% this year after tumbling with the rest of the market to start 2016. 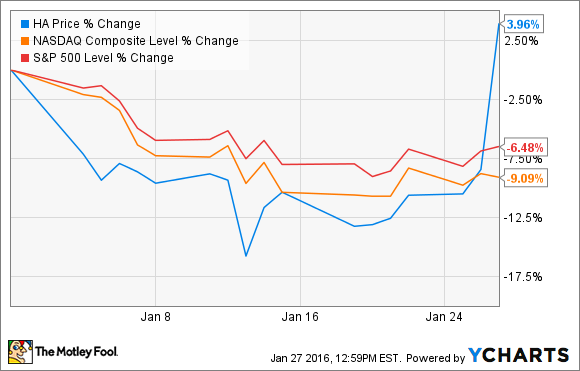 The small airline also finished the year with a strong balance sheet, with $772 million in total debt and $560 million in cash and equivalents, having repaid nearly $200 million in debt in 2015. The company also gave some guidance for 2016 on its costs and capacity expectations for 2016: Management wouldn't give further guidance on expected revenues or earnings, but CEO Peter Ingram did say that foreign exchange -- which has weighed on Hawaiian Airlines over the past year or so -- is on track to improve, particularly in Japan early this year, and later in the year in Australia and New Zealand. If that does indeed play out, it could be a boost to the company's profit this year, especially if fuel prices stay low.

Now what: Hawaiian Holdings has a solid balance sheet, operates in a relatively strong demand environment, and is slowly growing its fleet to take advantage of growing demand for travel to and from the markets it serves. Furthermore, air travel in general is in a strong cyclical growth phase right now, and Hawaiian Holdings is positioned well to take advantage of that.

If you're looking for a well-run airline with solid growth potential, Hawaiian Holdings should be on your short list -- even after today's big jump.