Please ensure Javascript is enabled for purposes of website accessibility
Log In Help Join The Motley Fool
Free Article Join Over 1 Million Premium Members And Get More In-Depth Stock Guidance and Research
By Andrew Tonner - Jan 27, 2016 at 7:23AM

IBM added again to its growing array of cloud computing services with last week's purchase of Ustream, but does this make this value stock a buy today?

The past five years have arguably been the most abysmal in IBM's (IBM 0.91%) long, vaunted history. 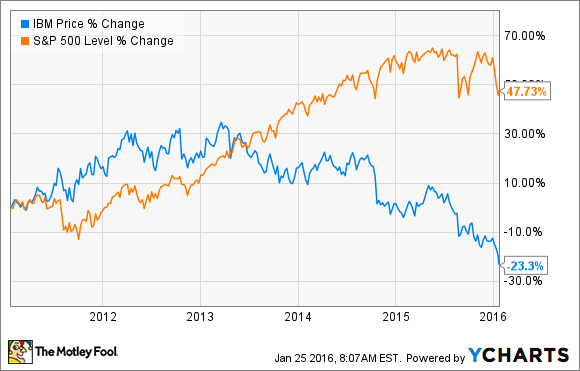 With its share having underperformed the market by a whopping -75% over this period, the pressure to deliver concrete results has arguably never been higher for CEO Ginni Rometty. Doing so will require IBM to continue to scale its growing cloud computing business, which has made impressive strides over the past several years. And recently, IBM further augmented its cloud product portfolio by purchasing video streaming start-up Ustream.

IBM buys Ustream
Last week, IBM announced the latest addition to its budding portfolio of cloud video assets with the purchase of Ustream for a purported $130 million. For those unfamiliar with it, Ustream's cloud-based technology enables diverse clients like corporations and broadcasters to stream online video for both live and on-demand content. Ustream's technology already reaches over 80 million monthly viewers, and the company enjoys an impressive list of clients including NASA, Facebook, Nike, and The Discovery Channel, to name a few.

According to the press release on the deal, IBM will fold Ustream into its new Cloud Video Services unit, where the company plans to integrate its technology with other recent cloud video companies including Clearleap, Aspera, and Cleversafe. IBM also plans to allocate a meaningful portion of its legendary R&D muscle to further aid the expansion of Cloud Video Services, an area in which the company already owns over 1,000 patents. All told, IBM believes the global market for cloud video services represents a $105 billion business opportunity by 2019.

IBM a buy on cloud strength?
Several months ago, I cited IBM as an intriguing potential contrarian buy. And with its shares down roughly 11% since, and the company's strategic narrative largely unchanged, I still find myself somewhat cautiously enamored by IBM's investment opportunity. Whether the company can successfully pivot into a dominant cloud computing and analytics company remains the crucial question.

In its most recent quarterly report, IBM demonstrated genuine progress in shifting its business model away from its decades-old three-pronged hardware, software, and services strategy and toward its "strategic imperatives" like cloud computing, analytics, security, and social. In total, IBM's strategic imperatives grew 26% year over year in a constant currency basis its fiscal 2015. What's more, they now account for a meaningful 35% of Big Blue's total revenue. This represents legitimate progress on management's part. Unfortunately, the fact that the company's strategic priorities only account for 35% of its sales also shows how truly large a ship IBM is to turn.

So, while its turnaround efforts will undoubtedly require several years to fully materialize, IBM's current valuation offers a compelling amount of protection for investors willing to wait. Today, the company trades at an earnings multiple of just 9 times its last 12-month EPS, and its dividend yields an impressive 4.2%. IBM's prowess as a savvy financial steward for its shareholders also makes it more attractive at these depressed levels. The company loves repurchasing its own shares, and stock buybacks at single-digit earnings multiples can easily help continue to grow overall EPS even as its top-line growth remains anemic throughout its transition.

So, while the market appears impatient with IBM, investors are being paid to wait today while IBM continues to navigate its generational business pivot.

Andrew Tonner has no position in any stocks mentioned. The Motley Fool has no position in any of the stocks mentioned. Try any of our Foolish newsletter services free for 30 days. We Fools may not all hold the same opinions, but we all believe that considering a diverse range of insights makes us better investors. The Motley Fool has a disclosure policy.