What the deal means to both sets of investors.

Monday's announcement of a merger agreement between Tyco International (TYC) and Johnson Controls Inc (JCI 3.54%) brings different things to each set of investors. Adding Tyco's fire and security systems to Johnson Controls' heating, ventilation, and air conditioning, or HVAC, solutions will create a leading player in the commercial building-products marketplace. However, Johnson Controls also contains a Power Solutions and Automotive Experience business (car batteries, and car seating and interiors, respectively) that Tyco investors will now be invested in. Let's take a closer look at the deal and what it means to both sets of investors. 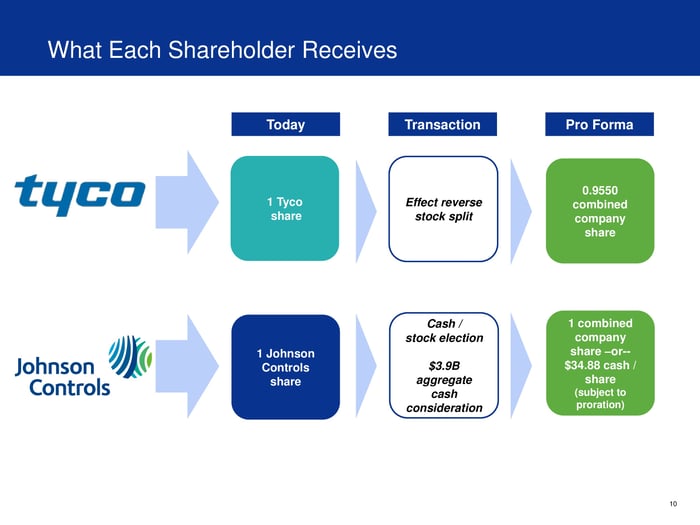 Second, the merged company will then carry out Johnson Controls' existing plan to spin off its Automotive Experience segment, to be called Adient. The resulting company will contain a balanced mix of HVAC and Controls, Fire, and Security products, plus Power Solutions. 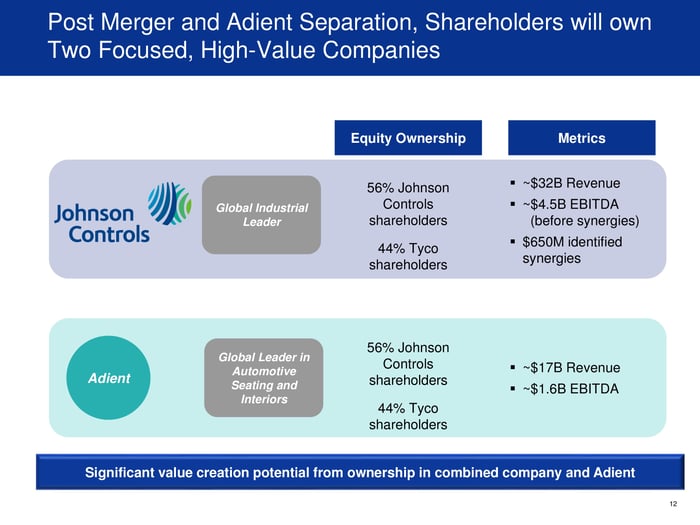 Clearly, this means that Tyco investors will own around 44% of Adient, and 44% of Johnson Controls plc. I make this point to highlight that despite all the media attention on the benefits of the building-systems synergies, Tyco investors are still getting exposure to Adient's automotive operations and Johnson Controls' Power Solutions.

Deal benefits
The benefits can be split into four areas:

The tax benefits are obvious to both sets of investors. While Tyco investors are already getting the tax benefits of an Ireland domicile, they're also getting an investment in a company (Johnson Controls Inc.) set to have a lower tax burden in the future.

Operating synergy
Frankly, the intended annual operating synergy of $500 million looks conservative. It represents just 1.6% of the estimated post-Adient Johnson Controls Plc revenue of $32 billion. However, it may reflect on the largely complementary nature of each company's building products. In addition, the geographic fit is complementary, with Johnson Controls strong in building systems in China, while Tyco is relatively stronger in Europe.

Revenue synergy
Given the conservative-looking operating synergy guidance, it's surprising that management hasn't quantified revenue synergy yet, particularly as it's the most obvious rationale for the deal.

The benefits of adding scale and cross-selling opportunities to both sets of investors should be obvious, while the long-term growth of Internet-enabled devices (in other words, the Internet of Things) in both companies' products will create an increasing amount of common technological ground. 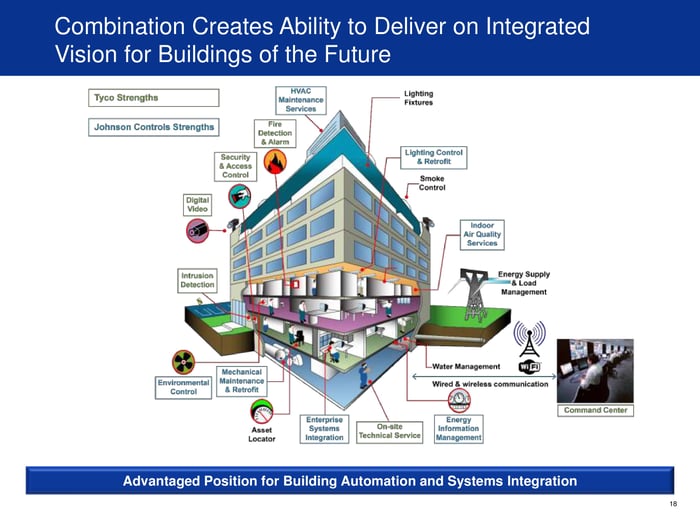 At the end of the two stages, Johnson Controls investors will retain an interest in Adient, but they're gaining a greater exposure to a building solutions market through Tyco's fire and security products. This marks an ongoing transition toward less cyclical end markets and a shift in emphasis toward the construction sector. Throw in the synergies and it looks like a good move, and one in line with management's stated ambition.

Investment proposition: Tyco International investors
Tyco investors are enjoying the nearly 12% increase in the stock price following the announcement, but they're getting investments in end markets (car batteries, and car interiors and seating) that they may not have originally anticipated.

Power Solutions (that is, car batteries) is an attractive business, with around 75% of its revenue coming from the aftermarket -- implying good recurring revenue -- and an area where Johnson Controls has been actively investing in growth areas such as AGM batteries.

However, Automotive Experience has some near-term question marks surrounding it. Going back to Johnson Controls' 2016 outlook meeting, management forecast a nearly 11% rise in automotive production in China. This looks like an optimistic assumption. For example, PricewaterhouseCoopers forecasts 8.2% growth in China light-vehicle production, and in December the secretary-general of the China Association of Automobile Manufacturers, Dong Yang, predicted vehicle sales growth of 5% to 7% for 2016.

The takeaway
The operating synergy guidance of $500 million looks conservative, and it's odd that revenue synergies weren't given even a ballpark estimate -- it suggests there's some potential upside to synergy generation.

Given where the stock prices are now, I think Johnson Controls investors should be happy about the deal, as it's in line with management objectives. However, Tyco investors need to consider whether they want to be invested in the automotive industry. The deal isn't just about synergies from joining two complementary building-solutions businesses.