Please ensure Javascript is enabled for purposes of website accessibility
Log In Help Join The Motley Fool
Free Article Join Over 1 Million Premium Members And Get More In-Depth Stock Guidance and Research
By Andrew Tonner - Jan 27, 2016 at 6:43AM

With rumors of a possible Twitter buyout resurfacing, let's look at the most logical names that might want to acquire the social blogging platform. 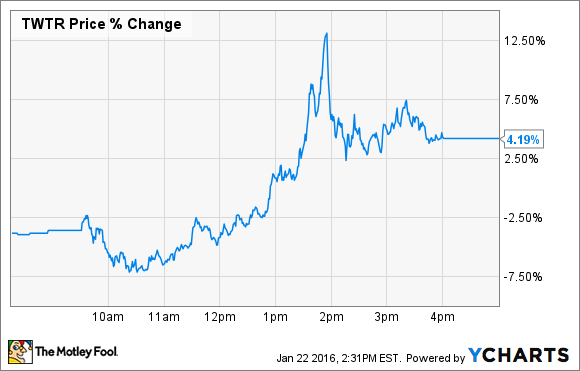 On Jan. 20, Twitter took the cake for wildest single trading day for an individual tech stock in recent memory, as its shares initially slumped, then soared, and then ultimately settled to a moderate positive gain for the day. The source? A rumored takeover from media giant News Corp. caused the stir, though the company later refuted the news.

However, with Twitter's shares at least rumored to be back in play after their 50% plunge, let's review which companies might make sense as possible acquirers of Twitter and what each might gain in doing so.

Alphabet (GOOG -0.54%) (GOOGL -0.57%)
Back when it was Google, search-cum-moonshot giant Alphabet reportedly floated a number of unofficial offers to acquire Twitter. Today, the case remains unchanged that the two new-media powers could complement one another. Off the top of my head, Alphabet could more deeply integrate Twitter data into both search results and, especially, its news product to leverage Twitter's real-time short-form news and analysis capabilities. Additionally, placing Twitter feeds inside Alphabet's YouTube would strengthen the online media giant's hand if it holds broader ambitions for breaking into live broadcast content.

Facebook (META -1.01%)
Much like Alphabet, a Facebook-Twitter pairing could prove quite complementary in a number of ways. On the monetization front, integrating Facebook's rich user data into Twitter's ad business could help improve the quality of targeting for Twitter's ads. Additionally, Facebook could leverage Twitter subsidiaries such as Periscope or Vine, to drive high-quality live video content onto its news feed, which could in turn help Facebook continue to grow the amount of time users spend on its platform. It's also worth noting that Facebook made an offer to buy Twitter for a reported $500 million circa 2008, but the deal fell through at the last minute.

A major media brand
Much like the idea of having Alphabet integrate Twitter feeds into YouTube, a large U.S. media conglomerate could also leverage Twitter's unique ability to engage audiences in real time to enhance everything from live TV to online content. Major media companies have in the past demonstrated an interest, arguably misguided, in owning social-media assets. Most notably, there was News Corp.'s much maligned purchase of MySpace for $580 million in 2005. But Twitter would be far more complementary to any current media offerings from Time Warner, Viacom, Disney, Comcast, CBS, or even News Corp.

Better off alone
Still, my preferred option for Twitter would be for it to remain autonomous. The required premium to purchase Twitter would probably exceed $15 billion, which is a material amount even for cash-rich names such as Alphabet or Facebook.

Its shares do trade near their all-time lows, but there's plenty of reason to believe that Twitter could turn a corner over the next year or so. The company has a new product-focused management team. It's introduced several important initiatives over the past several months. Perhaps most importantly, it has signaled that major product additions are around the corner. Most importantly, its forthcoming decision to add long-form tweets could help expand Twitter's appeal into new audiences far beyond its core function as a microblogging platform today.

However, when I saw Twitter shares surge and then resettle on rumors that News Corp. was thinking about acquiring the social blogging site, I found myself asking which potential acquirers might make sense without having a response at the ready. So while these names represent the most logical potential bidders for Twitter, my money's on this tech turnaround to continue to blaze its own trail forward for years to come.

Suzanne Frey, an executive at Alphabet, is a member of The Motley Fool's board of directors. Andrew Tonner has no position in any stocks mentioned. The Motley Fool owns shares of and recommends Alphabet (A shares), Alphabet (C shares), Facebook, Twitter, and Walt Disney. The Motley Fool recommends Time Warner. Try any of our Foolish newsletter services free for 30 days. We Fools may not all hold the same opinions, but we all believe that considering a diverse range of insights makes us better investors. The Motley Fool has a disclosure policy.