Since the Justice Department quashed Electrolux's proposed purchase of General Electric's appliance division, Whirlpool (NYSE:WHR) is pretty certain to remain the world's largest maker of major appliances. Selling GE's appliances instead to Qingdao Haier will not create the juggernaut that a sale to Electrolux would have.

As the industry's wave of consolidation suggests, major appliances are a business where scale matters. Much of the advantage comes from purchasing economies. Other than certain key parts that they make themselves, such as motors and compressors, white-goods manufacturers are largely assemblers of purchased components, both off-the-shelf and made-to-specification. But there are also marketing advantages: Especially in developed markets, large suppliers with diverse products lines and the resources to promote them are less disadvantaged than their smaller rivals when negotiating with the big-box retailers that dominate distribution.

Whirlpool's stock-price history has been dominated by the "story" that it is the vehicle par excellence to profit from the rise of a middle class in the developing world. The story's credibility began to fade about a year ago, as emerging markets' troubles became clearer to investors: The stock peaked on March 2, 2015: 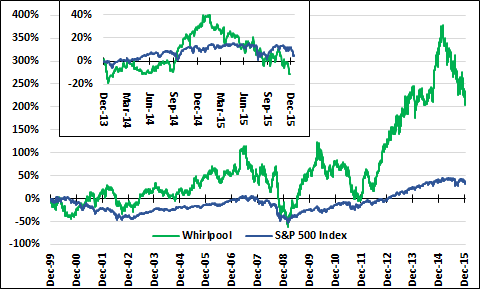 With its Q3 2015 results, Whirlpool revealed the extent to which the story is over. It expects full-year volumes in Latin America (16.3% of revenue) to decline by 20% and in Asia (7.2%) by 2% (of which China is down 4% on a comparable basis). Russia and Ukraine are expected to decline by 25%. In addition, currency depreciation in most of these countries, as well as in Canada and the eurozone, was forecast to reduce 2015 revenue by $2.5 billion.

New homes, especially new construction, are important drivers of U.S. demand for major appliances. The recurring expectation that housing will fully recover, and its persistent failure to do so, have also raised doubts about Whirlpool's outlook. The stock's retreat from its April 26, 2010, peak probably resulted from investors' realization that the administration's economic and regulatory policies were failing to stimulate house purchases.

Yet when presenting its Q3 results, Whirlpool raised its 2015 forecasts for both North American revenue (51% of nine-month revenue) and margins. In the first nine months, North American revenue declined slightly, because of the Canadian dollar and Mexican peso, but operating income on a continuing basis rose 10.5%. This situation resulted from reduced component and energy costs, an improved sales mix, and productivity gains. Two of these three influences are at least partially under Whirlpool's control and can be expected to persist. The recent drop in existing-home sales is the result of changes in HUD filing requirements and may correct itself in the next month or two. But Whirlpool has demonstrated that, in the U.S., it can thrive reasonably well in a very mediocre housing environment.

Nine-month Europe/Mideast/Africa sales jumped 80.3% as a result of the acquisition of Indesit in December 2014. Currency effects shaved 44.3 percentage points off this increase, thanks especially to the collapse of the ruble. Operating income increased from the ludicrous to the merely pathetic: To be nearly acceptable, Whirlpool's EMEA margin must quadruple. The European white-goods market is challenging, featuring not only Electrolux, AEG, Bosch-Siemens, and Miele, but also Turkey's Beko and Italy's Candy and SMEG, just to mention the larger players in a fragmented market. Pricing is always difficult, particularly for lower-end models. The restructuring measures needed for significant margin improvement will be very hard to carry out in Italy, where employee protections are nearly sacrosanct. Three of Indesit's eight manufacturing plants are located there. Whirlpool has its work cut out for it in Europe.

Asian sales rose 106.9%, also as a result of an acquisition, and its operating margin rose from nil to 6.8%. This is also a difficult market, and Qingdao Haier's purchase of GE's appliance unit, while it won't affect the Chinese market immediately, will, in the long run, certainly strengthen what is already a powerful force in the market. However, Whirlpool's opportunities here are greater than in Europe: Growth potential (including exports within the region) is higher, it's starting from a less depressed earnings situation, and the competitive environment, while unlikely to get easier, at least does not include significant privately owned European producers for which maximizing profit seems to be a secondary consideration.

Whirlpool is trading at 10.7 times Yahoo! Finance's 2015 consensus estimate and nine times its 2016 estimate, implying an 18.4% earnings increase this year. This, presumably, assumes further, if reluctant, improvement in U.S. housing, considerable margin improvement in Europe, and stabilization in China. None of these is by any means assured. Whirlpool's stock is down 36.5% from its all-time high in March last year, which would suggest that there is a bargain here. Its price has retreated enough that its dividend yield is 2.7%, which is attractive if earnings can in fact grow at the forecast rate. But sentiment is clearly still adjusting to the slowdown in emerging market demand. Whirlpool is a stock to watch, but probably not one to buy at current prices.