If the BG Group merger experiences any hiccups, investors could see a company tethered to high-cost development in a low-price environment.

There is a lot of pessimism regarding shares of Royal Dutch Shell (RDS.A) (RDS.B). Despite strong cash flow results behind its less-than-stellar earnings results, shares of Shell have been sinking faster than its Arctic drilling rigs (too soon?).

Over the past 18 months, the company has lost more than half of its market capitalization while its largest peers, ExxonMobil (XOM 1.45%) and Chevron (CVX 1.65%), have seen more modest declines. 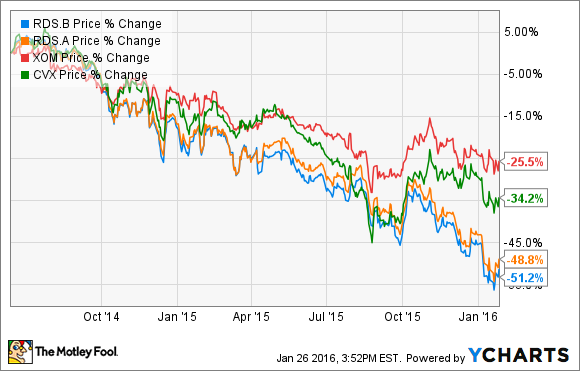 Unlike ExxonMobil and Chevron, which are continuing with business as usual with their development plans and slowing capital budgets, Shell is also in the middle of a transformative acquisition that could shape the company's future for decades. With that added uncertainty of what Shell will look like post BG Group merger, and oil prices in the $30 per barrel range, some investors may be wondering if 2016 will be a rough one to be a shareholder.

Let's take a look at what the BG merger will mean for the company long term and whether it will generate enough positive vibes to help turn Shell's share price around.

Reshuffling the deck
Typically, when we think of a major asset acquisition, we assume it will lead to a larger, more diverse company. With the acquisition of BG Group, though, it appears Shell is looking more to reconstruct its asset portfolio around a few small themes rather than simply adding size and scale.

As part of the BG Group merger, Shell has plans to unload about $30 billion worth of assets from the combined company by 2018. There are really two goals for these assets sales. One is to reduce the debt load that will increase by bringing BG into the fold, and the other is to focus its portfolio around two major themes: LNG and deepwater exploration.

Even before the merger, Shell was the largest LNG supplier of the integrated majors. With the combination of BG group, though, it gives the company equity interest in LNG sales that are more than double its closest peer, ExxonMobil. 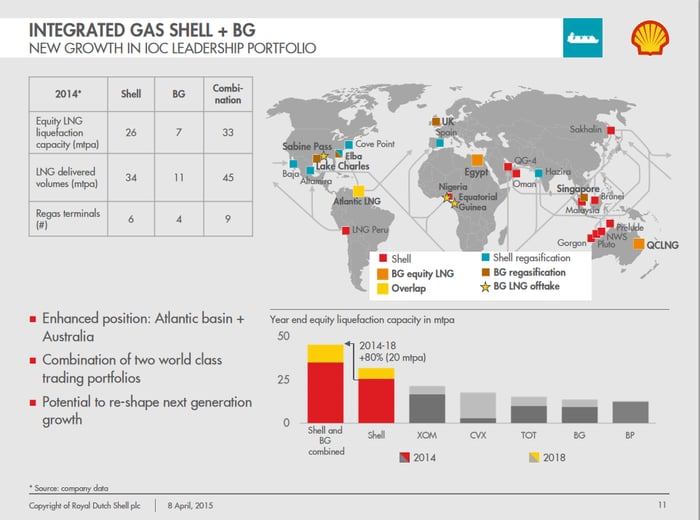 If you think that much exposure to LNG raises an eyebrow, then consider this: If Shell goes forward with all of its other LNG development plans, the combined company's interest could easily double again. 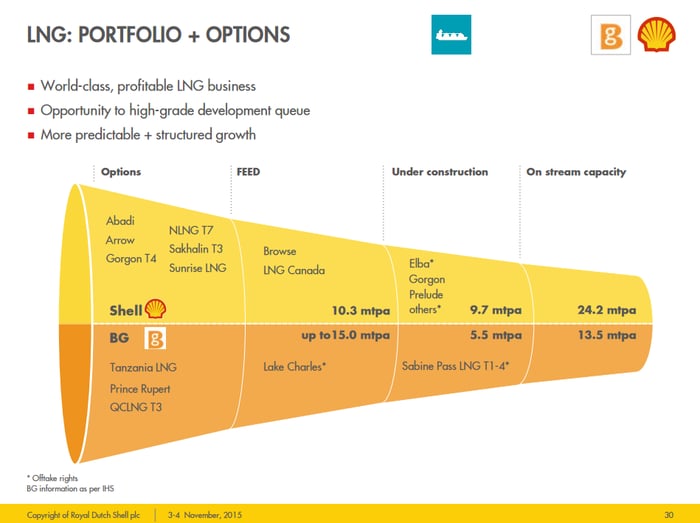 The same can be said for the combined company's interest in deepwater projects. Shell was already a company that relied heavily on deepwater and even harsh environment projects like the Arctic. By combinging with BG, it will significantly increase is deepwater exposure in places like Brazil where BG group currently has more than 400,000 barrels per day of production under construction.

Bigger doesn't always mean better
From a growth perspective, this may sound good. Higher concentrations in certain production types and geographic regions can lead to efficiencies of scale and other benefits. Here's the rub, though: These two types of production are some of the highest marginal cost per barrel sources of oil out there. Even according to the company's most recent analyst day presentation, its current deepwater portfolio generates no return on capital invested at $60 a barrel oil. With prices where they are today, it's going to be extremely difficult for Shell to turn a profit on its upstream production.

Over the past several quarters, the company's downstream refining and chemical manufacturing has helped to cover up weakness on the production side of the business, but it appears that this quarter, those losses may be too large to cover up. Shell has already announced a notice that profits for the fourth quarter will be between $1.6 and $1.9 billion, around 40% less than last year.

There is a lot of uncertainty about whether oil prices will be able to return to the $60 to $70 barrel range any time soon, and without that level of price, Shell and BG's combined portfolio doesn't have a whole lot of options to generate large returns. Also, these low oil prices will make it awfully hard to sell $30 billion of assets at attractive prices. So, if we were to see oil prices remain in the doldrums for a while, it's not too far of a stretch to see Shell's share price continue to sink in 2016.

What a Fool believes
The idea of making a transformative acquisition when the market has such a bearish sentiment for oil is a good idea. Back in the late 90s and early 2000s, we saw a slew of major acquisitions that brought together Exxon and Mobil as well as Chevron with Texaco & Unocal. That being said, there are a lot of questions as to how Shell will be able to turn the combined company's portfolio of higher-cost projects and make into a strong profit generator in a low cost environment.

If Shell can't immediately show initial benefits from the merger in 2016, it could be a pretty tough year for shareholders.

The Motley Fool owns shares of ExxonMobil. The Motley Fool recommends Chevron. Try any of our Foolish newsletter services free for 30 days. We Fools may not all hold the same opinions, but we all believe that considering a diverse range of insights makes us better investors. The Motley Fool has a disclosure policy.