Loss of interest in its key franchises, a lackluster film debut, and a slowdown in its mobile business could weigh on the shares.

For Activision Blizzard (ATVI -0.48%) investors, 2015 was a stellar year. Shares of the digital entertainment giant nearly doubled, rising more than 90%. Even factoring in January's lackluster performance, Activision stock is still up more than 60% in the last 12 months, easily outperforming the broad market. 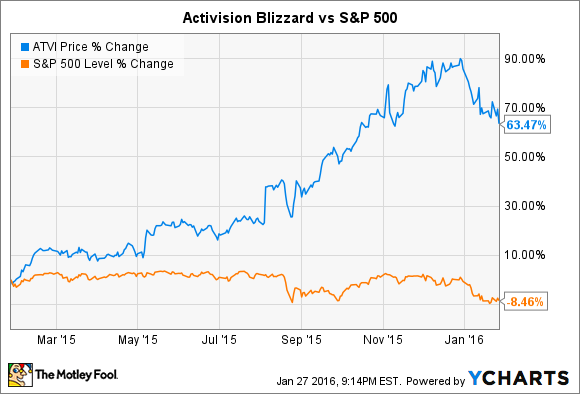 But Activision Blizzard could be due for a correction. Below are three reasons why Activision stock could head lower. And while a general market rally could always lift shares even if all three scenarios come to pass, they aren't likely to excite shareholders.

1. Gamers grow weary of its long-standing franchises
The Activision Blizzard business hasn't been this diverse in years. In addition to its core World of Warcraft, Call of Duty, and Skylanders franchises, the company can rely on several other titles, including Hearthstone, Destiny, and Heroes of the Storm to help drive its performance in 2016, along with newcomer Overwatch (set to make its retail debut in June).

But the bulk of revenue still comes from just a handful of core titles. In 2014, World of Warcraft, Call of Duty, and Skylanders generated 67% of net revenue and a significantly larger percentage of operating income. Notably, this was down from 80% in 2013, and when Activision turns in its full-year results in February, its dependency on these three franchises may have declined further. Still, they play an outsized role in driving Activision's business, and all three face challenges.

Skylanders pioneered the toys-to-life category but hasn't been able to maintain its control. In 2013, Disney followed with Disney Infinity, and last year, Warner Bros. entered the space with Lego Dimensions. The competition has taken a toll. On the company's earnings call in November, Activision Publishing CEO Eric Hirshberg admitted that Skylanders' sell-through was down on a year-over-year basis, owing to competitive pressures.

World of Warcraft will turn 12 in November. The enduring popularity of the massive multiplayer online RPG is impressive, but its best days appear to be firmly behind it. Last quarter, World of Warcraft's subscriber base fell to just 5.5 million players, a low last seen roughly a decade ago. Moving forward, Activision will no longer report World of Warcraft subscriber figures.

2. The King Digital acquisition proves lackluster
Last November, Activision announced that it would acquire mobile gaming giant King Digital (KING.DL) for $5.9 billion. With Hearthstone, Activision already has something of a presence in mobile gaming, but that presence will be significantly expanded going forward. With Candy Crush Saga, Farm Heroes Saga, and Bubble Witch Saga, King Digital owns some of the most popular and lucrative mobile games in existence.

Activision estimates that the acquisition will boost its adjusted 2016 earnings per share by 30% and introduce a variety of synergies that will benefit the company in the long-run. King's game-makers could tap into Activision's extensive well of intellectual property, and Activision could market its core games to King's massive network of players.

But the acquisition could burn shareholders if King's prospects deteriorate. Investors have long worried that King's business was unsustainable and that its dependency on a handful of games could devastate its financials if players lost interest. The mobile gaming market remains in its infancy, and King may not be able to maintain its massive player base in the long-run.

Last quarter, King's adjusted gross bookings fell more than 8% on an annual basis, while its adjusted revenue dropped more than 10%. That slowdown could be a minor speed bump, or it could be the beginning of a continued decline.

3. Warcraft is a box office bomb
The first major film based on Activision's intellectual property, Warcraft, will make its debut in June. Produced by Legendary Pictures and helmed by director Duncan Jones, the film could reinvigorate interest in Activision's aging RPG, sparking a wave of new subscribers.

Or it could flop.

Despite dozens of attempts over the years, video game franchises have rarely translated into successful films. If Warcraft bombs at the box office, the damage to Activision's financials will be minimal, but investors may come to doubt future plans. Activision has its sights set on becoming a full-fledged entertainment company, leveraging its popular video game franchises to produce successful blockbusters -- on both the big and small screens.

Activision has hired former Disney executive Nick Van Dyk and Hollywood producer Stacey Sher to oversee a television and film studio dedicated to creating movies and television shows based on its intellectual property. An animated Skylanders TV series will make its debut sometime this year, followed by a Call of Duty film in 2018 or 2019. Eventually, Activision plans to tap many of its franchises to deliver compelling scripted content.

Warcraft's failure wouldn't doom those plans, but it would be a bleak start to its crossover efforts.

Sam Mattera has no position in any stocks mentioned. The Motley Fool owns shares of and recommends Activision Blizzard and Walt Disney. Try any of our Foolish newsletter services free for 30 days. We Fools may not all hold the same opinions, but we all believe that considering a diverse range of insights makes us better investors. The Motley Fool has a disclosure policy.