Please ensure Javascript is enabled for purposes of website accessibility
Log In Help Join The Motley Fool
Free Article Join Over 1 Million Premium Members And Get More In-Depth Stock Guidance and Research
By Travis Hoium - Jan 28, 2016 at 8:20AM

A new revenue source could be opening up in the utility space.

If you're a energy investor in the U.S., you've probably been eagerly awaiting the Supreme Court's ruling about FERC's Order 745. Or maybe that was that just me?

Seriously, though, a Supreme Court ruling handed down on Monday January 25, 2016 could change the electricity business as we know it in a number of ways. It paves the way for demand to be treated as a resource in the same way supply is, which could create an entirely new business model in electricity all across the country.

What this ruling is
I won't go into the gritty details about what the ruling was (you can read the full ruling here), but the short story is that wholesale power companies were challenging the Federal Energy Regulatory Commission's ability to create rules that will govern demand response.

Demand response, in its simplest form, is what happens when the electricity market puts a dollar value on consumers who don't use electricity. You can think of it like telling you I'll pay you $1 to not run your dishwasher between the hours of 8:00 and 5:00 tomorrow.

In reality, demand response is more complicated than that, but FERC will now be able to create rules that treat demand as a resource, the same way electricity supply is a resource. This will create a world of opportunity for companies innovating in this space. Here are a few potential winners.

EnerNOC
One of the real pioneers of demand response was EnerNOC (ENOC). The company built a large network of customers who would adjust demand by turning down air conditioners or lighting when EnerNOC asked them to, and EnerNOC would then bid that potential energy savings into competitive wholesale markets, primarily PJM.

The business has grown rapidly as it built out demand capacity, but the court battle leading up to this ruling took its toll on the company. If the Supreme Court had ruled the other way, it could have undermined EnerNOC's entire demand response business by stripping FERC's power. 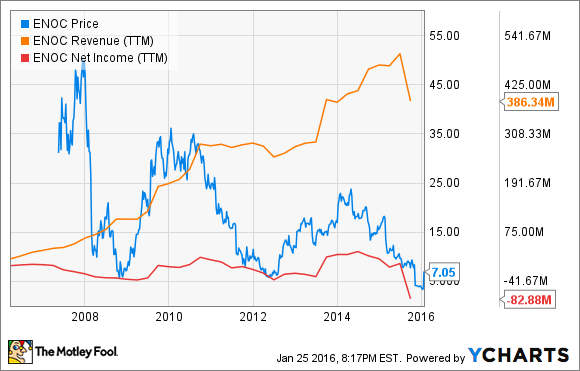 As it stands today, EnerNOC will be one of the biggest beneficiaries of the ruling. It's hard to tell what the financial impact will be, given the company's losses over a long period of time, but this is a company to keep an eye on as the demand response market opens up.

Demand response could be a revenue generator for the Tesla Powerwall. Image: Tesla Motors.

SolarCity
Distributed resources, or energy resources not coming from the central grid, got a big boost with this ruling, and that plays into SolarCity's (SCTY.DL) wheelhouse. Rooftop solar is just the start of the company's long-term plans, which include energy storage and smart controls of the house. A decade from now, I wouldn't be surprised if SolarCity wasn't offering a full suite of products that will create energy, store energy, and consume energy all when it's best for the consumer.

Having the ability to provide energy or energy savings to the grid at a competitive rate could also help alleviate the pressure of changes to net metering. The current net metering structure is slowly fading away, particularly in California, and this could create a new revenue stream on top of electricity from solar panels, all controlled through a SolarCity inverter.

Google and Apple
Don't look now, but Alphabet's (GOOGL -1.77%) Google and Apple (AAPL 0.88%) have been building platforms for smarter energy usage for years. The Nest Smart Meter and Apple HomeKit will be the platforms they build off, and that includes demand response.

Google has already launched a program called Rush Hour Rewards, which will help you earn money from lowering your energy usage. If this is expanded to include control of more devices, such as washers and dryers, and expanded into more markets, it could create a big market for Nest.  Google doesn't break out Nest unit sales but there are hundreds of thousands, if not millions, of Nest devices already in the field, and Google could add this revenue source to their capabilities.

Apple's HomeKit could serve a similar role as Nest, although it's uncertain how Apple views its role in the smart home. HomeKit could be the central command point for smart home devices, and a demand response system could be integrated into that. What would be key for Apple would be ingraining customers further into its ecosystem. If you have a smart home that runs on HomeKit, everyone in the home has an incentive to have an iPhone, iPad, Mac, and/or Apple TV. That's a lot of recurring sales as people dive deeper into the Apple ecosystem.

Energy innovation is at hand
What the expansion of demand response markets really does is open up all kinds of energy innovation options for companies. Everything from smart thermostats to energy storage can now become a revenue opportunity. This changes the game in energy and will be a big threat to the utility status quo, something we can partially thank the Supreme Court for.

Suzanne Frey, an executive at Alphabet, is a member of The Motley Fool's board of directors. Travis Hoium owns shares of Apple. The Motley Fool owns shares of and recommends Alphabet (A shares), Apple, EnerNOC, SolarCity, and Tesla Motors. Try any of our Foolish newsletter services free for 30 days. We Fools may not all hold the same opinions, but we all believe that considering a diverse range of insights makes us better investors. The Motley Fool has a disclosure policy.