While the media focuses on Apple's (NASDAQ:AAPL) slowing growth in its most-recent quarter, the tech giant is performing exceptionally well on one particular metric: gross profit margin. This is defined as the percentage of sales left after cost of goods sold, and the higher this margin, the better. Fortunately, Apple's gross margin has been on the upswing recently.

Apple's gross profit margin in the just-reported quarter, in particular, was notable. Both the impressive level Apple's gross margin has reached, and the company's ability to -- yet again -- beat its own expectations on the important metric, is impressive.

After flexing its pricing power with the iPhone 6 lineup, introducing high-end iPhone models that pushed the ceiling for the product's prices, the company's gross profit margin began rebounding. And now Apple has posted a positive year-over-year comparison for its gross profit margin in every quarter since the second fiscal quarter of 2014. 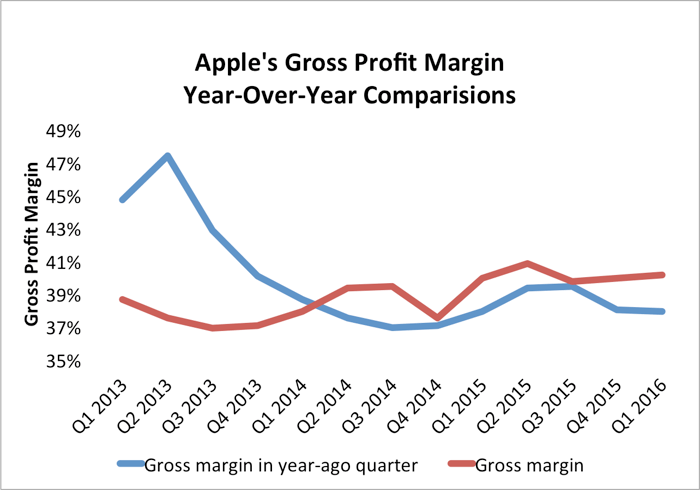 Apple's ability to achieve a gross profit margin in excess of 40% in its most-recent quarter is more evidence of the company's pricing power. Customers continue to be as willing as ever to pay a premium price for Apple's iPhone. The average selling price for the device was a record $691 during the quarter. This is up from $687 from the year-ago quarter, and $670 in the prior quarter. Adjusting for currency headwinds, Apple's average selling price was up a whopping $740.

Is 40% sustainable?
It may be difficult for Apple to sustain a gross profit margin of 40% or higher. Indeed, Apple is already predicting the important metric will come down in Q2. Management guided for a gross profit margin between 39% and 39.5% for the quarter -- guidance that is notably below Apple's forecast for 39% to 40% for Q1.

But the longer Apple proves to investors that it has pricing power at its disposal, and that its products are in a premium market of their own, the company's robust gross profit margin looks like one of the key reasons to hold this stock for the long haul. A profit margin so meaty means Apple can continue to generate heaps of free cash flow and -- hopefully -- use this free cash flow on shareholder value-building activities.

Sure, the metric will likely be volatile as Apple's product cycles fluctuate, and as the company introduces new product categories over time. But Apple's gross profit margin history suggests that investors can likely expect the metric to stay near 40% as the company benefits from its pricing power, scale, and loyal customer base.