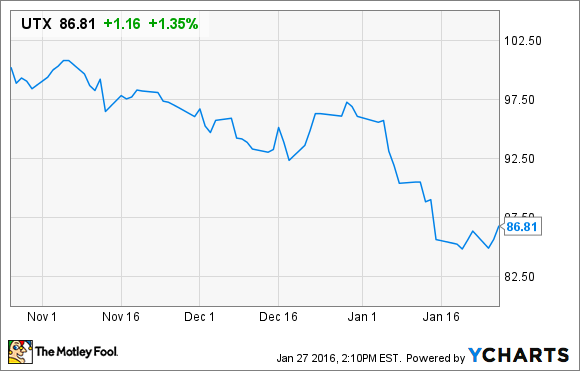 Four times a year, United Technologies (NYSE:RTX) reports quarterly earnings, granting investors a snapshot of how things are going at the given instant. But full-year fiscal earnings? Those come but once a year. So while the rest of the market is cheering United Tech's Q4 earnings "beat" ($1.53 per share in "adjusted EPS," a penny ahead of estimates), we here at the Fool are going to skip right past that news -- and go straight to the heart of the matter:

How did United Technologies perform in 2015 as a whole -- and did it do well enough to make the stock a buy?

2015 at a glance
Last year was a big one for United Technologies, marked primarily by the divestment of Sikorsky, and a refocusing of the company's energies on two core business areas: aerospace and buildings. United Tech is making a big bet that keeping these two business spheres, with their superb profit margins, and unloading the lower-margin, more end-market-focused Sikorsky division, is the right way to maximize profits going forward. So how well is that strategy going?

From the analysts' perspective, this therefore worked out to a mixed earnings report in which UTC missed on revenues (Wall Street was expecting $57.3 billion) but beat on earnings (which were only supposed to be $6.28). Investors, in contrast, are viewing the year as a win all around, and they bid up UTC shares 0.2% in response on Wednesday, even as the rest of the stock market crashed.

Were they right to do so?

Management guided investors to expect $56 billion to $57 billion in sales this year, implying sales growth even despite continued foreign exchange headwinds. Adjusted earnings are expected to hold firm at $6.30 per share at a minimum, and may grow as high as $6.60, a respectable 5% pace. Perhaps best of all, management says that free cash flow in 2016 could run as high as 100% of reported profits. If they're right about that, then 2016 could be the first time in three years that United Technologies achieved such a feat, and mark a return to the company's historical habit of almost always producing more cash profit than it reports as net income.

What does all this work out to, valuation-wise? Well, the concept of adjusted earnings is a bit fuzzy, as it's never 100% clear what a company is "adjusting" before spitting out its final number. That said, $6.60 in earnings (using the high range of earnings projections) seems to imply about a 13 current-year P/E on United Technologies stock, and a 13 price-to-free cash flow ratio as well.

Meanwhile, analysts currently forecast better than 10% long-term earnings growth at United Technologies. Add in a generous 3% dividend yield, and "13 times earnings" looks to me like a fair price to pay for United Technologies stock.