Please ensure Javascript is enabled for purposes of website accessibility
Log In Help Join The Motley Fool
Free Article Join Over 1 Million Premium Members And Get More In-Depth Stock Guidance and Research
By Reuben Gregg Brewer - Jan 28, 2016 at 11:05AM

After five annual increases in row, is LyndellBassell going to do it again in 2016?

LyondellBasell Industries (LYB 0.81%) emerged from bankruptcy in 2010 ready to take on the world. It's put up solid earnings numbers since and, perhaps more important for dividend investors, has now amassed a streak of five annual dividend increases. Industry dynamics are changing, however, and 2016 probably won't be as robust a year as investors have become accustomed to. So will LyondellBasell reward dividend investors again this year?

The streak is alive
This is mincing words, to some degree, but LyondellBasell has historically increased its dividend in the middle of the year. What this means is that, even if the chemical company doesn't raise its dividend in calendar year 2016, its full-year dividend will be larger than it was in 2015. So as long as there's no dividend cut, yes, LyondellBasell will add another year to its annual streak of dividend increases.

But that's really not what dividend investors are looking for. They want to see an increase every single year. It's seen as a statement that management and the board believes there's a bright future for a company. So despite extending the streak to 2016 without any new dividend news, the question of a dividend increase still has important implications.

Good, but not as good?
The thing about LyondellBasell is that the spread between the price of natural gas and the price of oil has given it a margin advantage in its industry. Ethane, a natural gas product, is a key input to the company's chemical production in the United States, whereas foreign competitors often rely on higher-priced, oil-based naptha.

But if you've been watching the price of oil nosedive, you realize that this advantage is eroding. One key metric the company watches is the oil/gas ratio. The average oil/gas ratio between 1999 and 2009 was 8.5. It reached nearly 60 in 2012 and was about 20 toward the end of last year. Oil, however, has continued its downward spiral, recently dipping below $30 a barrel. According to LyondellBasell, the 8.5 average ratio suggests oil should be in the $20 to $25 a barrel range. It's getting closer to that. But as oil inches lower, LyondellBasell's advantage shrinks. 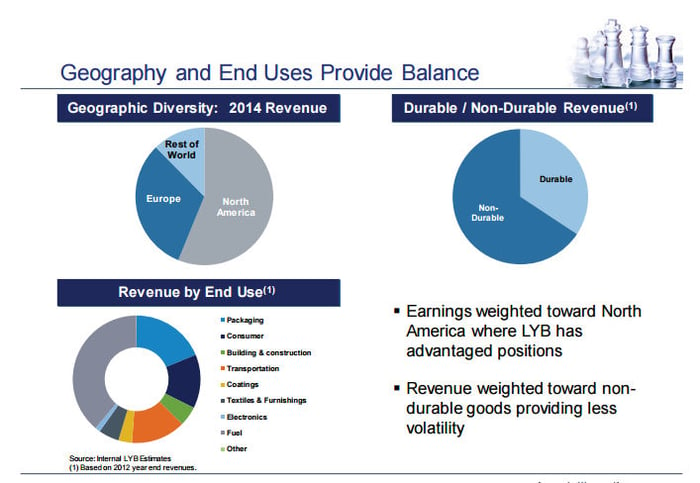 Bigger business
The thing is, while the U.S. market accounts for the lion's share of LyondellBasell's revenues, it operates globally. So the oil price decline is a headwind, but not the end of the world. Moreover, the company is expecting stable demand in 2016, even though it thinks pricing will tighten. In other words, this year will probably be tougher than 2015, but at this point it isn't expected to be terrible.

Moreover, the chemical company is keeping its costs low and buying back shares, both of which are important to ensuring there's enough cash to raise the dividend. On the cost side, it's pretty obvious -- the less you spend, the more that's available. And LyondellBasell is pretty cheap, with SG&A expenses accounting for just 2.3% or so of sales in the third quarter of 2015. At the other end of the spectrum is DuPont (DD), where SG&A ate up around 20% of sales. There are a lot of companies in between, but you get the idea. 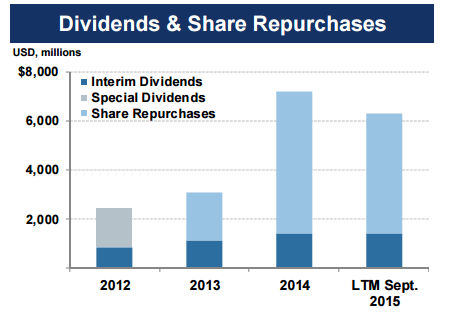 Stock buybacks, meanwhile, mean that dividends are being spread over a smaller number of shares. Earnings per share will benefit from buybacks, too. So even if LyondellBasell's business isn't as good this year as it was over the past few years, upping the dividend, and showing an earnings-per-share improvement, won't be as hard to do because net income and dividends are being spared over a smaller share count. And it's making big buys, too, acquiring roughly 3.3% of the outstanding shares in the third quarter of 2015 alone.

The upshot?
Looking at it from a big-picture perspective, it seems that LyondellBasell is facing some headwinds in 2016. But the bottom isn't expected to fall out from under its business. With a lean operating structure, a falling share count, and a history of annual dividend increases, it seems reasonable to expect another one toward the middle of the year.