The cable giant's management team recently held a chat with analysts about its record fourth-quarter results.

Cable giant Time Warner Cable (NYSE: TWC) posted fourth-quarter earnings results this week, and investors liked what they heard. Shares rose immediately following the announcement to extend their outperformance over the broader market: TWC is up 30% in the last year, compared to a 5% drop in the S&P 500. 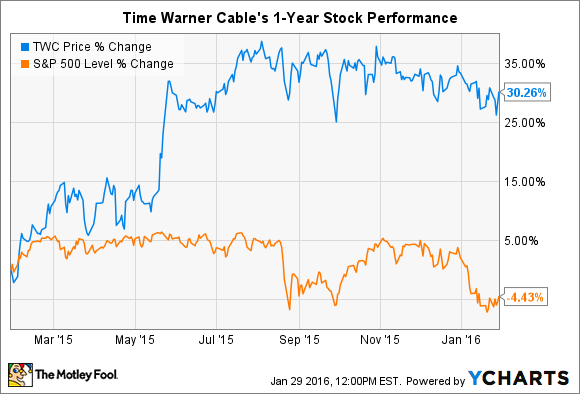 After the announcement, CEO Rob Marcus and his executive team held a conference call with analysts to put the record results in context. Here are five key quotes from that chat.

Some quarters are more fun to report on than others. This one is fun. -- Marcus

The chief executive opened the conference call with this optimistic line, and it's easy to see why the management team is enjoying itself. After all, the company posted its first gain in cable subscribers since 2006 and notched 618,000 total new customer relationships for the year. "That's not just our best ever" result, Marcus pointed out. "It's nearly three times the previous record."

Thanks to that customer growth rebound, TWC posted a 5% revenue gain that was also its best performance since 2010.

Keeping a hold on existing customers

[Fourth-quarter] connects were 14% higher than the year ago. ... But it was not just a connect story in Q4. -- acting co-CFO Bill Osbourn

Part of the story behind those record results was a surge in new customer signups, especially in major markets like California and Texas. But what's even more encouraging for the business is TWC's progress in keeping the customer base it already has.

The cable giant's churn, or cancellation rate, plunged by 5%. That improvement combined with the 14% connection jump to power its best Q4 performance in its key cable video (+54,000) and high-speed Internet (+281,000) segments:

I'm equally pleased with the progress we're making in the areas that are under the radar that enhance customer experience and are critical to delivering sustainable growth going forward. -- Marcus

Cable companies frequently top polls ranking America's most hated enterprises. Yet TWC has made progress at becoming more popular with its customers lately.

Customer care calls were down 13% last quarter, required technician visits plunged 19% lower, and when techs did have to make an in-person trip they showed up within a one-hour window 98% of the time.

As a result, customer satisfaction scores are rising. Management admits that it has more work to do on this score, but plans to keep focusing on improving the customer experience in 2016.

The main factor in TWC's declining profitability (gross profit margin fell to 35% of sales from 37%) was surging content costs. But capital expenditures also grew at an elevated rate as management plowed cash into building out its network and improving the reliability of the existing infrastructure.

Both cash requirements should continue to grow at a faster pace than revenue, at least until the company can return to consistent subscriber gains. At that point, it will be easier to pass along more of the rising tech and content costs to the customer base.

We have an ambitious 2016 financial and operating plan. -- Marcus

The proposed merger with Charter Communications (CHTR -0.03%) is slowly progressing through the regulatory process, but between the various federal and state government reviews, management can't predict when final approval might occur.

That also means investors won't get a detailed 2016 financial outlook, since the merger details are still being decided. "But you shouldn't assume that means we're standing still," Marcus said. The broad plan for the year ahead calls for more subscriber growth and customer experience improvements that end up powering improving sales and profits.