On Wednesday, shareholders of Royal Dutch Shell overwhelmingly approved the acquisition of BG Group plc, with 83% of votes cast in favor of the mammoth deal. If you ask this columnist, the uncertainty regarding whether it will ultimately produce an acceptable return for shareholders does not warrant that level of support.

(On the other hand, BG Group shareholders knew a good thing when they saw it, with 99.5% voting in favor of taking Shell's cash and shares.)

Indeed, there is no indication in Shell Group's share price performance (orange line in the graph below) since the deal was announced that the market was anything other than satisfied: 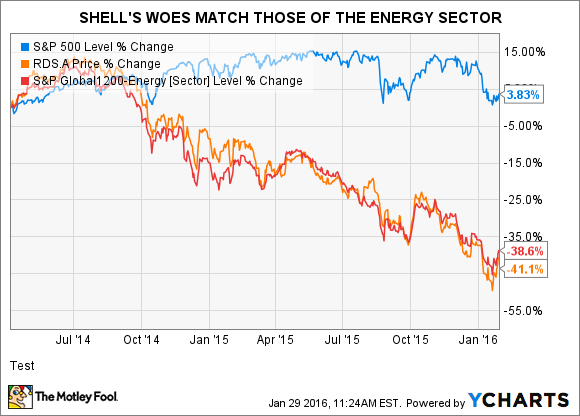 When the deal was announced on April 8 last year, the offer represented approximately a 50% premium over the closing price of BG Group's shares the previous day (and roughly the same premium over the volume-weighted average price over the prior 90 trading days). Shell's cash-and-share offer valued BG Group at a whopping $70 billion.

BG Group's bread and butter is liquid natural gas, not oil, but as Ivan Marten and and Daniel Jimenez of the Boston Consulting Group remarked in the week prior to the deal's announcement:

Global natural-gas markets have already felt some impact from the slide in oil prices. But those markets will be affected to a much greater degree if oil prices remain in the $50-to-$60-per-barrel range for an extended period, given the interaction that exists between the two fuels.

At that time, the market viewed $50 to $60 oil as depressed prices; today, the same range would represent a major recovery! And while the slide in natural gas prices has not matched that of oil since the BG acquisition was announced, the active Liquid Natural Gas East Asia Index Swap Futures is 38% lower.

Shell's acquisition of BG now represents an enormous bet on the price of oil. The initial bet has not gone Shell's way since it undertook this deal, and it's likely that the breakeven period has been pushed out at least a couple of years (on an economic basis -- it's not clear if the acquisition will ever break even).

Furthermore, financing the deal in part with what is likely an undervalued currency -- Shell's shares -- does not look like a wise use of shareholders' capital. Pursuing this deal against all odds is an odd choice for a company with such a conservative culture -- there is no mother lode to be found here.

Alex Dumortier, CFA, has no position in any stocks mentioned. The Motley Fool recommends Royal Dutch Shell B. Try any of our Foolish newsletter services free for 30 days. We Fools may not all hold the same opinions, but we all believe that considering a diverse range of insights makes us better investors. The Motley Fool has a disclosure policy.