Activision Blizzard (NASDAQ:ATVI) pays a dividend, but it's far from substantial. The video game giant declared its first dividend in 2010. Since then, it's provided a steady stream of income for its investors, but the appreciation of its share price -- up more than 230% since 2010 -- has been far more significant.

Still, investors might wonder if a dividend increase is likely in 2016. Let's take a closer look at Activision Blizzard's business and commitment to capital returns.

Not much of an income stock
For the last five years, Activision has made only a single, annual dividend payment each spring -- and a relatively paltry one at that. That gives it only a modest yield. Still, it's reliably raised that dividend each year since it initiated it, typically around 5%-10%. Last year, it raised its dividend 15%, which was the single largest increase on a percentage basis in its history. Overall, its dividend has grown just over 50% since Activision began paying one.

Since the beginning of 2010, Activision stock has outperformed the broader S&P 500, but its dividend has aided in its performance. On a total return basis, Activision is up more than 264%, compared to about 238% just in terms of price appreciation. 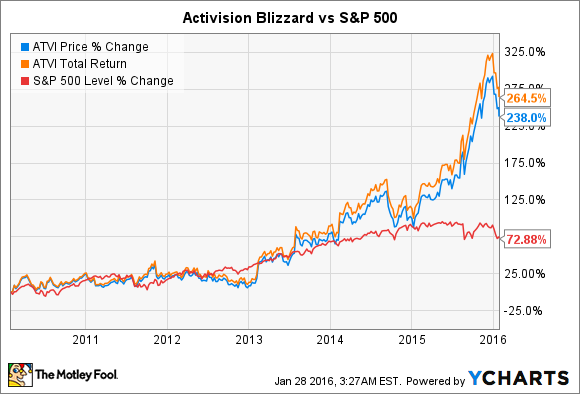 An increase in 2016?
If Activision is going to increase its dividend this year, investors are likely to find out soon. The company is set to report its fourth quarter earnings on Feb. 11, and if the last five years are any indication, Activision will update its dividend policy in that quarterly release.

Activision's business is strong. Shares nearly doubled in 2015, led by the performance of familiar franchises (Call of Duty, Skylanders, World of Warcraft) and relatively new additions (Hearthstone and Destiny). In the third quarter alone, Activision generated $1.25 billion of free cash flow, up 43% on an annual basis. That dwarfs the modest $167 million it paid out to shareholders last May.

A dividend increase would be almost a forgone conclusion if it weren't for the company's planned acquisition of mobile gaming giant King Digital (NYSE:KING.DL). Last November, Activision announced that it would purchase the maker of Candy Crush Saga for $5.9 billion. Activision plans to use its offshore cash, in addition to some new debt, to finance the purchase. Assuming King Digital's business remains robust, the deal should benefit shareholders both in the immediate future and longer-term. Activision's management expects King Digital to boost its 2016 adjusted earnings by 30%, and give it access to the fast-growing mobile market. But it will weigh on Activision's balance sheet, at least initially.

On the company's earnings call last November, Activision's CFO Dennis Durkin admitted that the purchase would affect its capital allocation program -- the company no longer intends to utilize the $750 million authorized share repurchase program. Instead, Activision's near-term priority would center on reducing its debt. Still, Durkin reiterated Activision's commitment to its dividend. "Our dividend payout is expected to be largely consistent [with] our historical approach," he said.

That suggests Activision shareholders will receive a slightly bigger dividend this May.