Please ensure Javascript is enabled for purposes of website accessibility
Log In Help Join The Motley Fool
Free Article Join Over 1 Million Premium Members And Get More In-Depth Stock Guidance and Research
By Evan Niu, CFA - Jan 30, 2016 at 9:00AM

Investors only have half a quarter worth of iPad Pro results. It only gets better from here.

While investors shouldn't expect Apple's (AAPL 1.04%) massive new iPad Pro to be the cure for slowing unit growth, there are still some important ways that the larger tablet can strengthen the iPad business. It's undeniably still early days for the iPad Pro, so it still has a long way to go before its impact can be fully felt.

For instance, you can hardly even tell if you look at last quarter's results since the device wasn't available until November. Even when iPad Pro began shipping, the Apple Pencil (which is a large selling factor) was severely supply constrained. People even took to stealing them from Apple Stores, or scalping them online, because they were so scarce. Tight availability of Apple Pencil could have been a limiting factor to a small extent.

iPad Pro is just beginning
Apple doesn't break out product mix in any of its categories, but investors can get a sense of the mix by looking at average selling prices. If you look back, the iPad Mini's release expectedly marked a significant downshift in iPad ASPs. The lower price point made the smaller tablet a lot more affordable, and the product mix subsequently shifted toward these models (although we don't know by how much). The iPad Mini 2, originally launched in 2013, remains on sale today as the most affordable iPad, starting at $269.

Since the iPad Pro starts at $799 and maxes out at $1,079, you'd think that there would be a notable increase in ASPs if iPad Pros were comprising a meaningful portion of the mix. Last quarter, ASPs rose sequentially by just $3. 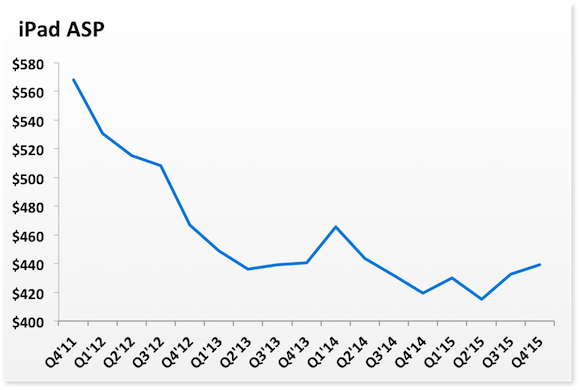 That would suggest that iPad Pro unit sales have been fairly modest thus far in the grand scheme of things, albeit partially due to a mid-quarter launch and aforementioned limited availability of Apple Pencil.

iPad Pro only goes up from here
Market researcher IDC recently told Business Insider that the iPad Pro may eventually come to comprise anywhere from 15% to 20% of iPad unit sales. BI figures that would theoretically generate $1.4 billion in revenue, based on last quarter's total iPad revenue. But that's the wrong approach since the weighted ASP includes iPad Mini results. You'd need to start with unit volumes. If iPad Pro hypothetically accounted for 15% of last quarter's 16.1 million units, that would translate into at least 2.4 million iPad Pros. If we apply a $900 ASP for iPad Pros, then we get to around $2.2 billion in revenue.

Of course, this is all just fun and games until iPad Pro actually starts to ramp up. But eventually, if iPad Pro can climb to 15% of the product mix or more, then investors could see a meaningful boost in ASPs and revenue even if unit volumes continue to meander.