Amazon.com (NASDAQ:AMZN) and Netflix Inc (NASDAQ:NFLX) are making waves in the entertainment industry once again.

At the Sundance Film Festival this week, the nation's largest independent film festival and a prime market for independent movies, Amazon and Netflix have thus far been the two biggest buyers. As of writing, Amazon has acquired five movies and Netflix has nabbed four.

The results are a marked contrast from a year ago when the two leading streamers showed up at the festival only to walk away empty-handed. 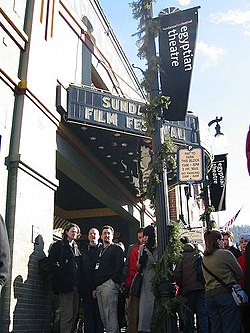 Filmmakers' attitudes toward the two companies seem to be changing as viewers' eyeballs migrate to streaming video and box-office tallies fall, especially for art-house, independent movies.

Thus far, Netflix has acquired "Tallulah," a comedy starring Ellen Page, and the Paul Rudd-directed drama "The Fundamentals of Caring," along with a horror film set in Iran and one other film. Amazon, meanwhile, won one of the biggest prizes at the festival, acquiring "Manchester by the Sea," an acclaimed drama starring Kyle Chandler and Casey Affleck for $10 million, outbidding the likes of Fox and Universal. It also bought the Todd Solondz-directed "Wiener Dog," and three other movies for less than $2 million apiece.

Both companies have set aside billions of dollars for their entertainment budgets. Amazon plans to spend $3 billion on content this year, while Netflix has earmarked $6 billion, giving it the second-largest budget in TV and movies behind ESPN. Not only do both companies bring deep pockets to Sundance, but they also provide built-in audiences of tens of millions of viewers. The guaranteed revenue from streaming subscriptions gives them a built-in advantage over traditional studios, which rely on big box office ticket sales to turn a profit. Traditionally, movies have been a very risky business as a flop can result in a loss in the tens of millions dollars, if not more. Not so for Netflix and Amazon.

The two companies aren't just outspending the studios at Sundance. They're also on par to release a similar number of movies this year. Amazon plans to release 12 movies a year, and Netflix will launch eight feature films this year.

By comparison, Disney, perhaps the biggest studio in Hollywood, is set to release 11 movies. Of course, many of those will have much wider theatrical releases than Amazon's or Netflix's films, but the quantity is similar.

The windowing problem
Netflix ran into a problem when it bid $20 million for "The Birth of a Nation," a slave-rebellion period drama and the hottest movie at Sundance. Netflix was the highest bidder, but it didn't win the movie. Instead, the filmmakers sold it to Fox Searchlight, which offered just $17.5 million for the picture but was able to give it a wide distribution in theaters and the accompanying push for an Oscar.

Netflix and Amazon are primarily interested in acquiring content for their streaming services, while filmmakers still want to get big box office numbers and the awards consideration that goes along with them.

A key difference between Amazon's and Netflix's strategies is that Amazon is willing to release its movies in theaters before adding to its streaming catalog, a concept known as windowing. Filmmakers prefer theatrical releases to stand alone, without competition from video or streaming. A few months after its release, a movie becomes available for streaming -- as Amazon is doing with "Chi-Raq", its first feature film, which was released in theaters on December 4.

Netflix, on the other hand, released "Beasts of No Nation" simultaneously in theaters and on streaming this October to disappointing box office results. It played in just 31 theaters and finished with a box office take of $90,000. Amazon has been more willing to cater to filmmakers, and seems to be the preferred partner of the two because of that. It even hired a team of executives to work on award strategies for its films.

While Netflix may remain frustrated in its battle against windowing, it's clear that the pendulum is swinging toward the streamers. Both Amazon and Netflix are growing membership at a substantial pace. Next year, the two will bring even deeper pockets to Sundance, taking a bigger bite out of Hollywood in the process.