Wondering how to put your money to work this year? We have answers.

On the heels of a historically painful start for the stock market this year, it might be tempting to stuff your cash into the nearest mattress and hope for the best. But even apart from the risk of inflation eating away at the value of your mattress' contents, history shows pullbacks like these offer long-term investors the perfect opportunity to put their money to work.

In light of this, we asked seven of our top contributors to offer their best ideas on where to invest money in 2016. Read on to learn which investments they chose and why.

Dan Caplinger: 2016 is already shaping up to be an extremely volatile year for the stock market, and investors know when the market threatens to fall, defensive-minded companies can be the best investments. That's one reason the iShares Select Dividend ETF (DVY -0.61%) could make a smart choice for 2016.

The iShares dividend ETF holds nearly 100 stocks that have at least a five-year history of paying healthy dividends to their shareholders. Currently, that list includes a host of defensive stocks, with utilities and consumer-oriented stocks making up nearly 60% of the total assets of the ETF. Historically, those stocks haven't always performed well during bull markets, but they've often outperformed broader market benchmarks during bear markets. By contrast, the ETF has only small allocations to high-volatility technology stocks. The dividend income these stocks pay also helps offset any capital losses the stocks suffer during a general market downturn.

Dividend stocks won't entirely protect you from downturns, so you shouldn't view them as replacing the fixed-income component of your portfolio. Still, they've generally done a good job of reducing volatility, so considering an investment like the iShares Select Dividend ETF is a smart move for conservative investors in 2016.

Steve Symington: It might seem counterintuitive given today's global economic uncertainty, but I think now is a great time to selectively invest in beaten-down luxury fashion and apparel companies. In particular, consider Coach (TPR -0.05%), shares of which have been cut in half over the past three years as the iconic company struggled to fend off trendier, faster-growing competitors like Michael Kors.

Fast-forward to today, and Coach is enjoying accelerated momentum in that turnaround on the heels of its impressive fiscal second-quarter 2016 results. More specifically, Coach not only demonstrated continued improvement in same-store sales -- which fell 4% year over year, compared to an 11% decline in comps in the previous quarter -- but it also raised its outlook for operating income thanks in part to the outperformance of Stuart Weitzman. Even more significant, Coach marked its first quarter of achieving year-over-year revenue growth since the middle of 2013.

Keeping in mind, Coach also pays a juicy quarterly dividend with an annual yield of 4% at today's prices, I think the stock should handsomely reward patient investors willing to watch as the company's turnaround continues to take hold.

The wholesale sell-off of retail stocks during 2015 and the beginning of 2016 has pushed prices down indiscriminately, leading to shares of solid companies selling at bargain prices. Investors need to be careful: Many retailers are facing fundamental problems that are unlikely to be resolved anytime soon. But a few retail stocks, namely Best Buy (BBY -0.42%) and Kohl's (KSS -1.33%), look like great places to invest in 2016.

Shares of both Best Buy and Kohl's are down nearly 20% over the past year, but both companies have a few things going for them. Best Buy and Kohl's have kept costs in check, spending less than their peers as a percentage of revenue operating their stores. Part of Kohl's long-term strategy has been keeping its costs lean, which is why the company builds its stores mostly outside of malls, while Best Buy has engaged in a multi-year turnaround effort that saw more than $1 billion of unnecessary costs slashed.

Both Best Buy and Kohl's also generate a ton of cash. Over the past 12 months, Best Buy has recorded a free cash flow of $995 million, about 10.5% of its market capitalization, while Kohl's generated $829 million, about 10.9% of its market capitalization. With low costs, ample cash generation, and the benefit of scale, both Best Buy and Kohl's are well positioned to ride out the retail storm, surviving, and even thriving, as smaller competitors struggle.

Sean Williams: If you're looking for great investing ideas in 2016, I'd suggest directing your attention to the biotech sector, where many good deals have reared their heads following the dismal start to the new year.

Biotech is of particular interest to me because brand-name therapy demand tends to be inelastic regardless of how well or poorly the economy and stock market are performing. As long as you can find a profitable drug developer with a somewhat diversified product portfolio and pipeline, your chances of outperforming appear good. My suggestion among the 359 publicly traded biotech stocks? Amgen (AMGN -0.43%).

Amgen's late-stage pipeline and recent drug launches have been the driving force for this company. It brought six therapies to market since December 2014 (five novel and one label expansion), and it anticipates reporting data or updating the development of eight mid- and late-stage candidates in 2016. New drug growth is the key to outpacing the finiteness of its mature patents, and Amgen looks to have a budding pipeline.

Of particular interest within its pipeline is its move into cardiovascular, a therapeutic indication in which it had no presence prior to 2015, the approval of two immunotherapeutic drugs to treat select types of cancer, and its nine biosimilars in development. Keep a particularly close eye on ABP 501, a biosimilar for Humira, the current best-selling drug in the world, which is set to go before the Food and Drug Administration for approval later this year.

Amgen also has steady cash flow from its established products, consisting of Neulasta and Neupogen, which fights neutropenia associated with chemotherapy, and anti-inflammatory Enbrel. Having improved its free cash flow in each of the past three years, and following yet another huge dividend increase to $1 per quarter, Amgen's 2.6% yield is just icing on the cake.

If you want to put your money to work in a high-growth, but relatively safe place in 2016, look no further than established biotech blue-chips like Amgen.

Tyler Crowe: I can't say with any certainty that this is an investment that will pay off in 2016, but this year looks like a great time to load up on equipment manufacturers that have a high exposure to commodities. For close to five years, basic materials such as iron ore and copper have been on the decline, and we're more than 18 months into oil's plunge.

During this time, miners and drillers have been doing everything they can to cut costs, and one method that has been quite popular is cannibalizing idle equipment for parts to keep the current equipment going. It has been a handy way to keep operating expenses a little lower, but that drawdown of inventory can only go on for so long before new parts and new equipment will be needed just to keep operations going at current rates. That doesn't even include the gains that could come from when mining and oil production activity pick back up and require more new equipment.

Three companies that really look intriguing from this angle are General Electric (GE -0.81%), Caterpillar (CAT -0.47%), and National Oilwell Varco (NOV 1.08%). All three are the best in the business when it comes to industrial manufacturing, and their high exposure to energy or mining over the past year or so has weighed on share prices, making valuations look their best in the past couple of years. 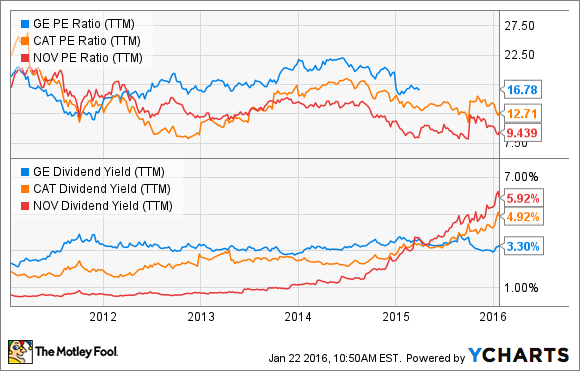 Again, an investment in any company with ties to commodities probably won't pay off big time in 2016. The chances of these markets staying low throughout the year is pretty good. However, those with some patience should be able to accumulate a position in these companies for a while at deep discounts that will be rewarded down the road.

Evan Niu, CFA: This isn't going to be a stock pick, but I think you should invest in yourself. Specifically, your past and your future. It's probably an understatement to say that 2016 is off to a rocky start. In fact, it's definitively the worst start to a calendar year ever recorded by the market, according to market statistician Howard Silverblatt. That volatility isn't expected to subside, either.

That's not to say there aren't some great stocks out there for cheap right now. But rather, with this level of uncertainty, it never hurts to pay down debt (paying for past spending) or build up cash savings (preparing for future spending). For example, if you have excess savings beyond what you'd need for an emergency fund, paying down debt is a good use of that cash.

Let's say your mortgage has a 4% interest rate. If you're able to earn investment returns greater than 4%, it makes sense to pay the minimum monthly payment and invest the excess cash, effectively arbitraging your capital. If you're not confident that you can earn 4% investment returns, you could pay extra each month and significantly reduce your long-term interest expenses.

The flip side is that if your emergency fund is a little light, you could use this year as an opportunity to build it up.

To be completely honest, this is actually my personal finance plan for 2016. I've long over-allocated to retirement savings and investing, and considering the volatility I expect for 2016, I'd rather use this year to pay down debt and beef up emergency fund cash savings.

Jason Hall: The steel market has been ugly for more than a year now, and it's been especially painful for U.S. steelmakers because of a major influx of imported steel into the country, much of it illegally subsidized by its country of origin. Add in a big drop in demand for steel for the energy industry, and weakening growth in China causing fears that the global economy is in trouble, and it may seem like time to stay away.

But Nucor Corporation (NUE -0.48%) is the best steelmaker in the U.S., and it consistently operates profitably, no matter the demand cycle. Besides, the U.S. economy looks strong, and growing demand from the automotive and commercial building industries has offset weakness from the energy industry.

Furthermore, Nucor is falling into value territory. The stock is down about 25% from its 2015 peak and has a price to earnings multiple of around 18 at recent prices. That's a strong value compared to recent years, and it could turn out to be very cheap when the steel market rebounds and profits bounce back.

Lastly, Nucor has a very long track record with its dividend and is currently yielding 4%. Don't expect big increases each year, but there has been a modest bump every year for decades, plus the occasional special dividend every few years. 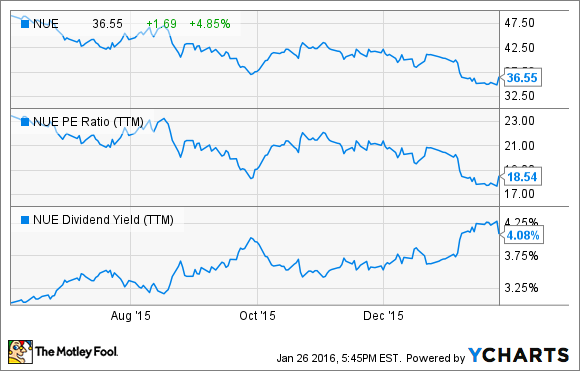 The steel market may take some time to fully recover, but Nucor is a worthy stock to buy in 2016.

What Happened in the Stock Market Today
349%