Please ensure Javascript is enabled for purposes of website accessibility
Log In Help Join The Motley Fool
Free Article Join Over 1 Million Premium Members And Get More In-Depth Stock Guidance and Research
By Andrés Cardenal, Jason Hall, and Brian Feroldi - Jan 31, 2016 at 9:08AM

Going over our big money mistakes can be both educational and entertaining.

Everybody likes bragging about profitable investments and smart money moves. However, if we truly want to learn valuable lessons, reflecting on our mistakes can be much more valuable. Even better, learning from the mistakes others have made can be not only educative but also -- why not? -- entertaining. With this in mind, our contributors share with our readers some big money mistakes they should have avoided.

Andres Cardenal: We tend to think that the stocks we buy can be our most dangerous mistakes. However, the ones we miss can be much more detrimental to our capital in the long term. When you buy a stock, it can theoretically go to zero in the worst-case scenario, meaning that you'd lose 100% of the money in that position. However, the stocks that do really well over time can multiply your capital several times.

I was going to buy Starbucks (SBUX 2.53%) five years ago, but I decided to wait for a better entry price because the stock looked too expensive to me back then. Fast-forward five years, and Starbucks has delivered a total return of 290% over that period, and the stock still trades at a considerable valuation premium versus the average company in the market. 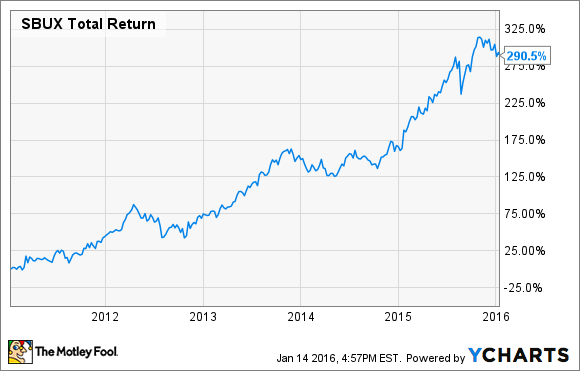 I've picked some lousy stocks over the years. In some cases I lost 50% or more. However, none of those mistakes was as expensive as missing the big gains that Starbucks has delivered.

At least I learned a valuable lesson. When you find a world-class business with a differentiated brand and the right management team, then you need to be flexible enough to pay above-average prices for a top-quality company.

Brian Feroldi: One big money mistake I made was buying a condo in 2005, when I was only a year or so out of college. The room I was renting at the time was substandard, and with housing prices going through the roof, I felt I was missing out by not being a homeowner. Every time I wrote a check to my landlord, it seemed like throwing money away, so I was in a rush to get in. I ended up buying a condo even though I didn't have enough cash to put the full 20% down. I financed the majority of the down payment with a second mortgage.

You can guess what happened next. Instead of only being responsible for a predictable rent payment I was suddenly on the hook for not one, but two mortgages, plus condo fees, real estate taxes, and all maintenance costs. Less than a year later, my condo fees were raised by 50%, my washing machine was having issues, and I landed a new position that required me to move three states away. Not exactly a great start to owning a home.

I put the condo on the market, and it took me six months to sell it, during which time I was paying for all of my condo costs, as well as for my new apartment that I was renting in my new area. It put me in a big financial bind, all because I was in such a rush to own my own home.

I learned my lesson -- even though renting sometimes gives you the feeling of throwing money away, it's often the cheaper option. The additional lifestyle flexibility gained from renting is also extremely important, especially when your career is just getting started.

Jason Hall: I've got a long list of money mistakes, and with each passing year, the list gets longer. The good thing is, each mistake is a lesson learned, and I've largely managed to stop making the same mistakes over and over. I've made the same mistakes as Brian and Andres, buying a house at entirely the wrong time in my life and taking a bath on it, and passing up great investments because the stocks looked overpriced to me at the time.

But my biggest money mistake by far is one that will stick with me until I'm old and gray(er): cashing out a 401(k) when changing jobs. But since I'm an extra special kind of stupid -- or at least I used to be, I did it twice.

The worst part of it? Both times, I was in my 20s. What makes my double-serving of this stupid money mistake the most painful is how valuable the time that I threw away was.

Between the two cash-outs, I took about $6,500 out of retirement savings. On the surface, that seems like a relatively easy amount of money to replace down the road, but it's stunning how much the when affects the reality. I was 26 when I did the second cash-out, so I lost 40 years to grow that money. Based on the stock market's historical rate of return, if I'd left that money in an S&P 500 index fund, it would be worth over $281,000 at age 67.

That's enough to buy a really nice sailboat, one that should be named Jason's Mistake.

The good news? I eventually learned the power of time and money and have super-charged my retirement savings since. Unfortunately, many people never do. I hope someone reading this avoids my double-whammy big money mistake.