Shipments and revenue were both up, but the rising costs of recalls related to a supplier's defective airbag parts hit Honda's bottom line hard during the quarter.

The small Honda HR-V is posting good sales results around the world. But a huge and growing recall mess more than offset the company's good sales gains during the most recent quarter. Image source: Honda.

Honda (HMC 1.19%) said on Jan. 29 that its net profit for the quarter ended Dec. 31 fell nearly 19% from a year ago, to 124.1 billion yen, as it continues to grapple with the high costs of recalling tens of millions of vehicles with defective airbag parts.

The key numbers
Honda begins its fiscal year on April 1. The quarter that ended on Dec. 31 was the third quarter of Honda's fiscal 2016.

All financial results are in billions of yen except as shown.

What happened with Honda during the quarter
At least from a sales perspective, Honda had a fairly decent quarter. Sales of Honda vehicles rose 4.6% around the world, with an improved "mix" of higher-profit models. That helped give revenue a 3.4% boost -- but a couple of big factors more than offset that modest gain.

Like many of its global rivals, Honda is continuing to work through the fallout of a massive scandal involving airbag-inflators made by Japanese supplier Takata. (Learn more here.) Airbag inflators use an explosive propellant similar to gunpowder to deploy airbags instantly in the event of a crash. Because of defects in the manufacturing process, the propellant in millions of inflators made by Takata can degrade over time and partially explode at random. When that happens, it's not just a harmless surprise: The airbag's metal housing can rupture, sending lethal shrapnel into the car's passenger compartment. To date, 10 people have been killed by the defective inflators, most recently a U.S. man driving a Ford Ranger pickup in December.

Takata sold these inflators to a long list of automakers over many years. About 60 million vehicles made by over a dozen automakers have been recalled over the last couple of years. But Honda has been hit harder by the scandal than any of its rivals. It has already recalled nearly 25 million vehicles around the world, and it said on Jan. 29 that it is preparing to recall another 5 million. And the costs are mounting. Honda Executive Vice President Tetsuo Iwamura said during a news conference on Jan. 29 that the company now expects to spend about 2.2% of its revenue in fiscal 2016, or roughly $2.6 billion, on costs related to the Takata recalls. That's up from the 1.9% estimate he gave last quarter. 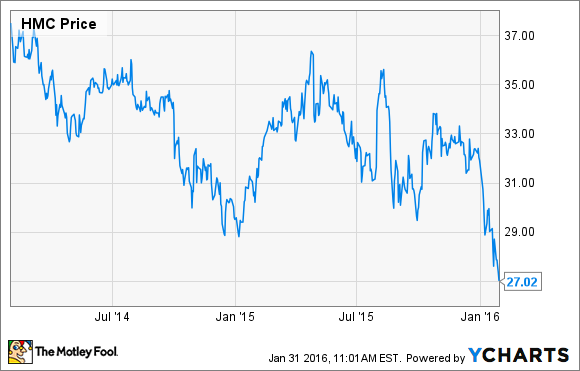 But despite the mounting costs of the Takata-related recalls, Honda's underlying performance remains on track. The company expects to post record sales in both the U.S. and China in 2016. And despite its revised estimate of the costs of the recalls, it hasn't backed off its prior profit forecast for the full fiscal year that will end on March 31. Honda still expects a full-year net profit of 525 billion yen, up 3.1% from its fiscal 2015 result.

John Rosevear owns shares of Ford. The Motley Fool recommends Ford. Try any of our Foolish newsletter services free for 30 days. We Fools may not all hold the same opinions, but we all believe that considering a diverse range of insights makes us better investors. The Motley Fool has a disclosure policy.