Selena Maranjian, Dan Caplinger, and Jason Hall
(TMFSelena)
Author Bio
Selena Maranjian has been writing for the Fool since 1996 and covers basic investing and personal finance topics. She also prepares the Fool's syndicated newspaper column and has written or co-written a number of Fool books. For more financial and non-financial fare (as well as silly things), follow her on Twitter... Follow @SelenaMaranjian
Follow @SelenaMaranjian

Most of us investors can't help it. We want our investments to grow -- and robustly. We used to look for "the next Microsoft" and now we're very interested in stocks that might be "the next Apple." In the same vein, it's natural to be curious about titans of investing -- folks who have outstanding records and from whom we might learn to be better investors. It's hard to think of a more impressive investor than Warren Buffett, so here's a look at three fellows who have been likened to Buffett.

Dan Caplinger: Canadian pharma giant Valeant Pharmaceuticals (NYSE:BHC) has generated a lot of attention lately because of its huge share-price decline, but a lot of the disappointment among shareholders stemmed from just how much optimism they had toward CEO Michael Pearson. Some pointed to Pearson as the next Warren Buffett, pointing to Valeant's acquisition-based strategy as being a long-term attempt to build up a healthcare-focused conglomerate that could command respect throughout the industry. Indeed, Pearson himself set ambitious goals for Valeant, hoping to put the company among the top five drugmakers in the world by this year.

Pearson was largely successful in building up Valeant into a major player in the industry. In just five years, Valeant stock jumped fivefold, and Pearson found himself responsible for one of the most impressive advances in the industry.

Late last year, though, Valeant became the subject of a scandal, with allegations of a secret network of specialty pharmacies and price mark-ups on key drugs leading to congressional scrutiny and a plunge in its stock price. Late in December, Pearson was hospitalized for pneumonia, and Valeant had to name a temporary interim CEO. Unless Valeant emerges unscathed from the episode, it's unlikely that comparisons between Pearson and Buffett will continue, but investors definitely shouldn't count Pearson out just yet.

Jason Hall: Markel Corporation (NYSE:MKL) co-CEO Tom Gayner easily makes this list, and has already been one of the most successful capital allocators out there. He was recently named co-CEO of Markel after more than 20 years with the company, primarily as its chief investment officer for the past decade.

In his time as CIO, Gayner has used the cash flows generated by Markel's core insurance business to generate exceptional returns Here are some of his best-performing long-term investments: 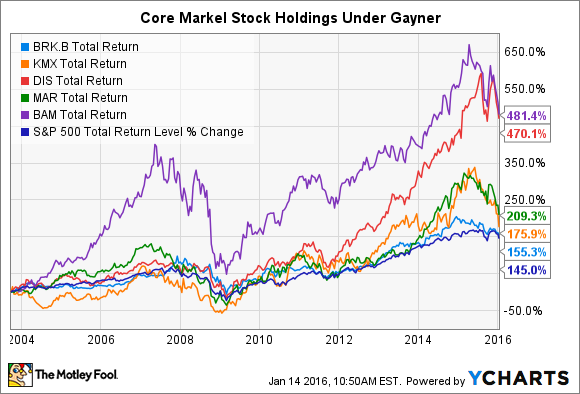 Stock picking is only part of what Gayner has done well at Markel over the past 25 years. More recently, he has also steadily been acquiring solid, cash-cow operating businesses under the company's Markel Ventures subsidiary, a move straight from the Buffett playbook. And while Tom Gayner isn't solely responsible for it, Markel has been one of the best stocks to own since he joined the company in 1990: 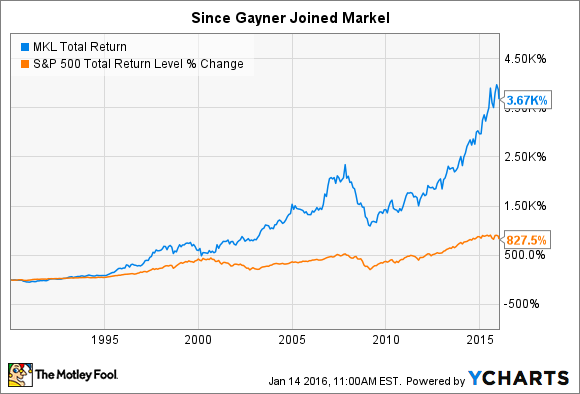 Even with such success already, Gayner, 53, may just be getting started. Markel is still relatively small, with a market capitalization of just over $11 billion -- not much larger than Berkshire was when Buffett was the same age. Furthermore, Buffett earned the lion's share of his wealth after turning 50, and almost all tied to Berkshire's results.

That's no promise that Gayner can produce similar returns as Buffett did with Berkshire, or that he'll even be at the Markel helm another 30 years. But there's no denying the potential is certainly there.

Selena Maranjian: One fellow often touted as "Canada's Warren Buffett" is Prem Watsa, founder of Toronto-based Fairfax Financial (OTC:FRFHF) -- which, like Buffett's Berkshire, is a major insurance company with a range of other operations, such as travel services, animal nutrition products, restaurants, sporting goods, and more. The company's stock has a similarly strong track record as Berkshire, though not as long, with an average annual gain of about 20% between 1985 and 2014. Like Buffett, Watsa also delivers a lengthy annual letter to shareholders, detailing company performance.

Warren Buffett's investing mentor was Benjamin Graham, and Prem Watsa named his son after Graham. Just as Buffett built his billions from nearly nothing, Watsa reportedly emigrated to Canada in 1972 in his early 20s with just $8 in his pocket.

Prem Watsa, like Buffett, is a value investor, having said, "Focus on a long-term value-oriented philosophy and not short-term gains." On the stock market, he has quipped, "Sometimes it buys at a high price and sells at a low price. Don't ever think that it knows more than you."

Watsa is no Buffett clone, though. One way that he differs is in his apparent risk tolerance, as Fairfax recently owned more than a quarter of BlackBerry (NYSE:BB), with Overstock.com another key holding. Buffett generally likes more visibility into companies' futures before investing, and while neither of these companies are doomed, both are working to turn themselves around. BlackBerry, for example, is embracing the Android system while possibly moving away from its BlackBerry operating system and is developing technology for driverless cars, too.

Watsa may not be quite all that Buffett is, but he and his company definitely warrant consideration. The stock even pays a dividend that recently yielded 2%.