Please ensure Javascript is enabled for purposes of website accessibility
Log In Help Join The Motley Fool
Free Article Join Over 1 Million Premium Members And Get More In-Depth Stock Guidance and Research
By Travis Hoium - Jan 31, 2016 at 11:29AM

A slight improvement in results last quarter could be the positive news Las Vegas Sands needs.

Macau continues to be a weak spot in the gambling market, but there are some signs that a turnaround is coming. Las Vegas Sands' (LVS -2.17%) reported fourth-quarter earnings on Thursday and a 16.2% decline in revenue to $2.86 billion and a 21.9% decrease in EBITDA to $1.05 billion show just how quickly the market is falling, but inside those numbers are some signs of a bottom.

Macau's worst days may be behind us
If there's one chart that shows some progress in Macau, it's the one following. Las Vegas Sands' EBITDA was up quarter over quarter, driven by a great quarter at Venetian Macau. 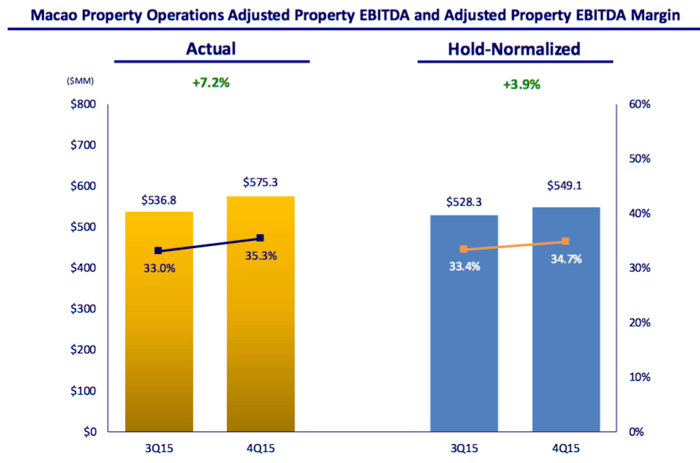 This chart needs a little context, because Macau's gambling revenue was up only slightly sequentially, and much of the EBITDA increase was due to cost cutting, but progress is progress.

Breaking down resorts even further, you can see that Venetian Macau was the all-star of the quarter. Following is the EBITDA change year over year at the company's four Macau resorts, which can be compared to Macau's gambling revenue decline of 27.5% from a year ago.

Some of Venetian Macau's success was a product of luck, and VIP play was down 20.8% from a year ago, while mass-market play was down 17.3%. But the resort's decline wasn't as bad as the Macau market as a whole, showing success in the company's mass-market and convention strategy.

These results should be noted by Wynn Resorts (WYNN -3.57%) and Melco Crown (MLCO 1.47%) investors. If Las Vegas Sands outperformed the market in Q4, someone had to underperform, and both companies could have lost market share.

Singapore struggles
Marina Bay Sands, Las Vegas Sands' resort in Singapore, had a little less impressive quarter. Revenue was down 28.3% from a year ago, and EBITDA dropped 27% to $160.9 million. What's shocking is that VIP volume dropped 50.8% from a year ago, showing just how deep the crisis is in Asia's high-end gambling market.

While Macau shows signs of a turnaround, Marina Bay Sands' struggles are only getting worse. This is a property that once generated $1.7 billion in EBITDA in a single year, so Las Vegas Sands needs to see improved performance in Singapore to show any real growth.

Las Vegas shines
It's crazy to think that Las Vegas is now a strength in the gambling industry, but that's the case for operators such as Las Vegas Sands and Wynn Resorts. In the fourth quarter, net revenues jumped 10.3% to $400.1 million, and EBITDA rose 24.9% to $97.4 million.

Most encouraging is that occupancy was 92.1% for hotel rooms and average daily rate, increased 7.7% to $239. Las Vegas is in a strong position, and that doesn't show any signs of slowing down.

Competition is coming
Fourth-quarter results for Las Vegas Sands were decent, but there are a few concerns for 2016. Melco Crown recently opened Studio City in the Cotai region of Macau, and that could siphon off some demand as the year goes on. But the bigger competition may come this summer, when Wynn Resorts will open Wynn Palace. This is Wynn's first move to Cotai, and the $4 billion resort could draw even more customers away from Las Vegas Sands.

This increased competition is why it's so important for Macau to begin growing again. Growth will allow for new resorts without cannibalizing old ones. But China faces an uncertain future, so growth isn't guaranteed, making for another uncertain year for gambling stocks.