Please ensure Javascript is enabled for purposes of website accessibility
Log In Help Join The Motley Fool
Free Article Join Over 1 Million Premium Members And Get More In-Depth Stock Guidance and Research
By Matthew DiLallo - Jan 31, 2016 at 9:16AM

The offshore driller is on deck to report its fiscal first-quarter results Tuesday after markets close.

The offshore drilling sector has been brutalized by the one-two punch of an oversupply of drilling rigs and a steep drop in the price of oil. This has put a lot of pressure on the industry's earnings and outlook. That being said, thanks to a strong contract backlog, Atwood Oceanics (ATW) has largely been insulated from the bulk of the industry's troubles -- at least so far. That strength amid the storm will be on display when the company reports its fiscal first-quarter results Tuesday evening. Here's what to expect to see in that report.

An early preview
Due to extreme market volatility in its stock price, whereby it plunged more than 40% since the start of the year, Atwood Oceanics gave investors an early preview of its earnings by providing guidance for the quarter in a press release in mid-January. Here's how that guidance compares to the company's prior results:

Before we drill into those numbers, there are a few things worth noting. First, the company noted in its guidance that it expects to collect between $10 million and $15 million in insurance proceeds relating to mooring system repairs on the Atwood Osprey, which was damaged in a cyclone earlier last year. In addition to that, Atwood Oceanics is evaluating a potential impairment charge for the valuation of the Atwood Falcon. That charge could be between $50 million and $70 million. That's noteworthy because the company's fiscal first-quarter results in 2015 were affected by a similar charge after the company recorded a $60.8 million impairment relating to the Atwood Hunter and a $8 million loss on the sale of the Atwood Ocean Cross. The reason I point that out is because on an adjusted basis, Atwood's net income that quarter was actually $115 million -- or $1.68 per share -- and not what's reflected on the chart able.

All this to say, even with the adjustments, both positive and negative, Atwood Oceanics' revenue and earnings are expected to fall quarter over quarter and year over year. That's largely due to the fact that the company currently has two jack-up rigs sitting idle and therefore is no longer collecting any revenue on those two vessels. That aside, the primary reason why the company released preliminary guidance was to show that it is still earning money despite the significant headwinds it's facing. 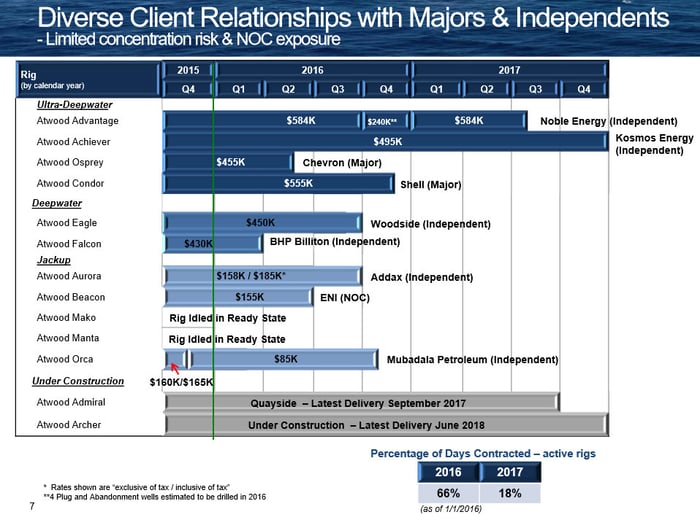 This suggests that the company's revenue and earnings could fall significantly over the next few quarters unless it can find new contracts for those rigs. That's not going to be easy given where the price of oil is right now, as well as the fact that the industry has a boatload of rigs sitting idle that likewise are looking for contracts. That's keeping a lid on dayrates, meaning that even if Atwood recontracted all its rigs, its revenue and earnings would still fall.

To put the industry's pressure into perspective, offshore fleet leader Transocean (RIG 1.12%) has already stacked or idled 22 of its 62 drilling rigs due to lack of work. It might not be done idling rigs because Transocean has 38 looming contract expirations of its own to deal with, as well as the fact that some of its customers have canceled rig contracts early. Meanwhile, when Transocean is able to find follow-on work, the rates aren't great. For example, the company recently was awarded a two-year contract for offshore work in Canada, but at a dayrate of $275,000, which is well below the rig's prior dayrate range of $347,000 to $476,000, though it is at least above its breakeven cost of $147,000 per day for this type of rig. That said, these conditions will make it really tough for Atwood Oceanics to keep its fleet operating anywhere near peak income capacity.

Investor takeaway
All things considered, Atwood Oceanics is expected to have an OK quarter. That said, investors are more worried about what lies in the upcoming quarters with respect to all the rigs it has coming off contract later this year. That will be the one thing investors will want to hear the company to address this quarter.