What can Exelon Corporation expect in the year ahead?

In 2008, Exelon Corporation (NYSE: EXC) stock plummeted 30%. Last year, it dropped 26%. With book value at a 20-year low, some investors are looking to 2016 as the beginning of Exelon stock's comeback story. With profits up and an attractive (and affordable) dividend, there are plenty of reasons to believe Exelon stock is ready to rock. But for those who have weathered this stock's storm for all too long, they still have reason to be wary of this company's supposedly stable returns to come. Whether you believe Exelon is headed up or down, here are two of the top issues you need to keep your investing eye on.

1. Merger Madness
In April 2014, Exelon Corporation announced plans to acquire Pepco Holdings (NYSE: POM) for $6.8 billion . Unfortunately for investors, that announcement marked the beginning of a painfully long engagement. Exelon Corporation and Pepco Holdings hit regulatory roadbumps in several states, with especially strong pushback from the District of Columbia. Our nation's capital is currently the last holdout, and it's expected to deliver a final verdict in Q1 2016.

If the merger falls apart, so does any chance of Exelon stock starting 2016 of on the right foot. Without it, Duke Energy Corporation (DUK 1.60%) gets to keep its top spot as the utility with the most customers. Exelon Corporation loses out on more sales, more regulated earnings, and economies of scale across its businesses. 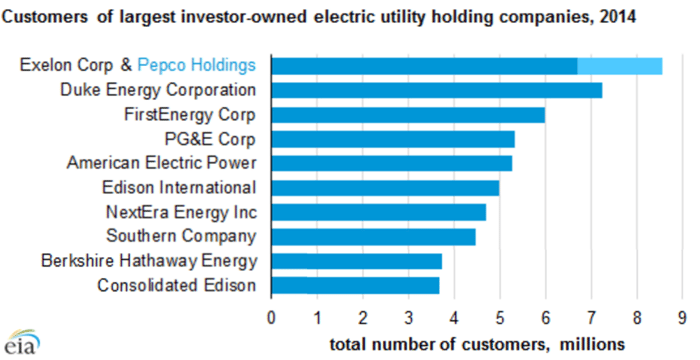 2. The Future of Nuclear
Exelon Corporation is the largest nuclear producer in the United States. It runs 23 of America's 99  total reactors. Nuclear makes up 64%  of Exelon's overall generation portfolio, and this energy source's rise and fall dictates the rise and fall of Exelon stock.

Exelon touts its nuclear portfolio as a clean energy powerhouse, providing zero-carbon steady energy that our economy needs. But nuclear has new enemies. From the free market side, natural gas is cutting into nuclear's comparative advantage. Domestic production has made gas cheaper than ever, and rising production has been the demise of nuclear demand. 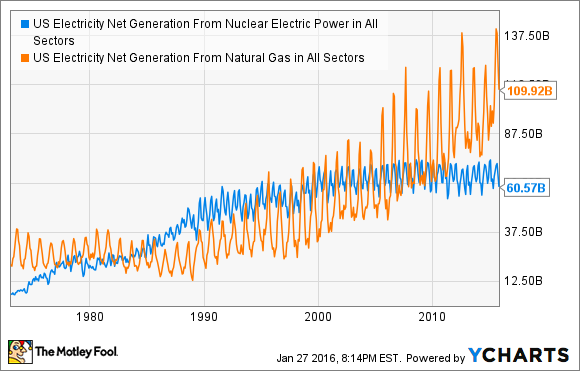 Natural gas production has expanded rapidly. As a result, natural gas prices have dropped more than 50 percent, lowering the price of electricity for all other power generators. At the same time, nuclear fuel, capital expenses and operating costs have increased 33 percent from 2008 to 2012. Some nuclear plants are now unprofitable.

But nuclear is also on uncertain regulatory footing. On Exelon's website, the company also notes that wind power's "serious subsidies" threaten the level playing field for carbon-free nuclear power. In Illinois (Exelon's nuclear stomping grounds), the state's compliance plan for the EPA's Clean Power Plan will determine how nuclear stands up to natural gas and other energy sources.

Exelon believes nuclear's best days have yet to come. It recently decided to delay the closure of a 1,000 MW  nuclear plant and is advocating for the continued funding of nuclear infrastructure investments in the years to come. With nearly two-thirds of its generation eggs in one big nuclear basket, it hardly has a choice.

Natural gas and regulators are both formidable nuclear foes, and Exelon will have to work hard in 2016 and beyond to keep nuclear power in a leading energy position.

Sell Exelon in 2016?
Merger skeptics and nuclear naysayers should give Exelon's stock a very wide birth. But these two issues aren't the only ones, and there are plenty of other reasons to both love and hate Exelon stock in the year ahead. Smart investors will develop an investing thesis, inform it with facts from this article and others, and stick by their stock decisions until something substantial changes.

Justin Loiseau has no position in any stocks mentioned, but he does enjoy nuclear hot sauce. The Motley Fool has no position in any of the stocks mentioned. Try any of our Foolish newsletter services free for 30 days. We Fools may not all hold the same opinions, but we all believe that considering a diverse range of insights makes us better investors. The Motley Fool has a disclosure policy.