2015 was a great year for NVIDIA (NASDAQ:NVDA) investors. Shares of the chip giant surged nearly 64%, strongly outperforming the broader S&P 500, as rising demand for the company's graphics cards defied the broader trends in the PC market. 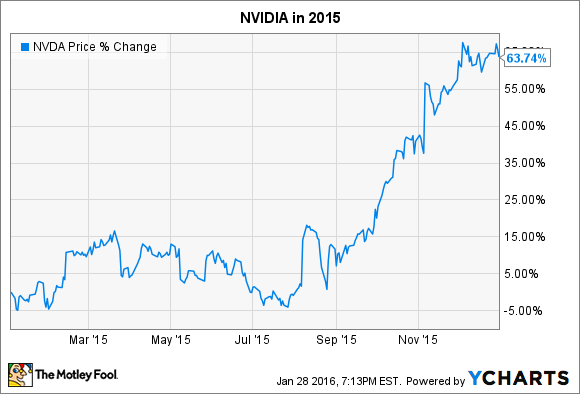 That sort of performance may be hard for NVIDIA to top in 2016. Still, there are reasons to be optimistic. On the company's earnings call in November, CEO Jen-Hsun Huang laid out the factors that would drive NVIDIA's business going forward:

Let's break those down individually and see how they could benefit NVIDIA's business this year.

PC gaming and virtual reality
In the long-run, virtual reality could find a place in many different industries, serving a wide variety of users. But for the next 11 months, virtual reality will be, for the most part, firmly bound to gaming, and more specifically, PC gaming. The first truly mainstream, compelling virtual reality headsets -- Facebook's (NASDAQ:FB) Oculus Rift and HTC's Vive -- will make their debuts this spring, and they could spark demand for NVIDIA's high-end graphics cards.

Both the Oculus Rift and the Vive require PCs equipped with powerful graphics cards to function. Facebook recommends -- at the bare minimum -- a PC equipped with NVIDIA's GTX 970. Retailing for around $300, the GTX 970 isn't cheap, but it's far from NVIDIA's most expensive card. The GTX 980 Ti and Titan will offer virtual reality users a more compelling experience, though they carry significantly higher price tags. In total, a desktop PC capable of supporting the Oculus Rift or Vive will, by itself, run upwards of $1,000.

For this reason, NVIDIA offered a somewhat tepid assessment of virtual reality in 2016. "I think it's prudent to wait and see," said Huang on the company's November earnings call. Facebook is taking a similarly conservative approach. "It's early in the evolution of VR. It's early to be talking about large volumes...It's not going to be material to our financials this year," said Facebook's CFO Dave Wehner on the company's January earnings call.

Still, early impressions of the technology have been almost universally positive, and it's possible that it could be a source of unexpectedly strong demand for NVIDIA's graphics cards, especially in the second half of the year. Such technology has never really been available to consumers on a grand scale -- demand could be unpredictable. Even if the headsets themselves don't sell in massive quantities this year, strong buzz could prompt the market to place a greater value on NVIDIA's future growth prospects.

More broadly, the rising popularity of PC gaming has benefited NVIDIA's business in recent quarters, and that could continue in 2016, irrespective of virtual reality. According to SuperData research, the PC generated more gaming-related revenue ($32 billion) last year than any other platform. Gaming demand accounted for almost 60% of NVIDIA's revenue last quarter, up 44% on an annual basis.

Artificial intelligence and the data center
NVIDIA's data center business gives it exposure to artificial intelligence. NVIDIA's Tesla GPUs power supercomputers that web service companies like Baidu use for deep learning and voice recognition. Artificial intelligence may sound like a far off, science fiction pursuit, but most tech firms are actively exploring the field in some capacity. Earlier this month, for example, Google announced that a program it had created -- AlphaGo -- defeated the European Go champion in five straight matches.

Autonomous vehicles
Finally, self-driving cars could benefit NVIDIA in 2016. Like virtual reality, it may not have an immediate effect on NVIDIA's financials, but the gradual realization of its inevitability, and NVIDIA's steadfast commitment to participate in the industry, could factor into NVIDIA's valuation.

At CES 2016, NVIDIA unveiled its second generation Drive PX platform. Compared to its predecessor, it offers around 10 times as much computational power. It's a developer platform, rather than a mass-market solution, but it gives automotive companies the processing power they need to create the autonomous vehicles of the future. And as those vehicles become commercially available in the years ahead, NVIDIA could become a trusted supplier.