Please ensure Javascript is enabled for purposes of website accessibility
Log In Help Join The Motley Fool
Free Article Join Over 1 Million Premium Members And Get More In-Depth Stock Guidance and Research
By Tim Brugger – Feb 1, 2016 at 8:44AM

The search king’s video behemoth is coming under pressure as the world goes mobile.

YouTube remains the undeniable online video leader, for both user views as well as an advertising platform. But there may be a chink in Alphabet's (GOOG -0.19%) (GOOGL -0.21%) armor, and none other than Facebook (META -0.93%) is ready and waiting to exploit the vulnerability.

As Facebook fans know, it tested its video plans for well over a year before finally opening the door to its marketing partners. During Facebook's video testing phase, YouTube continued to grow. Daily user growth jumped 40%, and the time spent watching YouTube videos is up 60% year-over-year. YouTube's concerns lie in a much-discussed facet of its business: mobile.

Alphabet has worked diligently to improve its mobile compatibility, and its efforts are beginning to take hold. However, according to a recent study, Alphabet's delays in making YouTube mobile-friendly left Facebook with an opportunity, and it's seizing it. 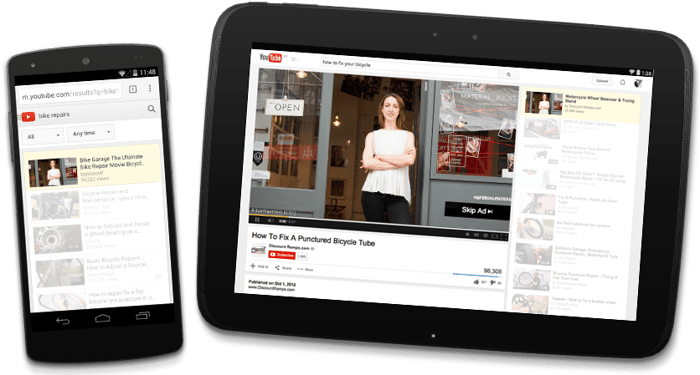 Just the facts
Video on the Internet has become commonplace, especially mobile, which is exploding as the world shifts to smartphones and tablets. As an advertising format, nothing can touch video from a marketer's perspective for the simple reason that they work. That's particularly true when video ads are targeted based on an individual's likes and dislikes, a strength of both Alphabet and Facebook. Target marketing is a big part of the reason the two are head-and-shoulders above other digital advertisers.

As expected, YouTube still commands the majority of advertisers' mobile video spots, according to a recent study from Business Insider. The report measured the number of video ads U.S. advertisers posted for mobile consumers each month, from Oct. 2014 to Oct. 2015. After some peaks and valleys, YouTube ended with about 7,500 videos posted by its U.S. ad partners. That leads the way, but it's down slightly from 2014's approximately 7,800.

Facebook is a distant second to YouTube, with 3,800 video ads -- give or take -- posted by U.S. brands in Oct. 2015. Why, then, should YouTube be concerned about "holding off" Facebook? Because in 2014, Facebook's U.S. brand partners posted just 1,800 mobile spots. While Facebook was more than doubling its number of mobile video ads posted domestically, YouTube was losing ground.

Why the shift?
The study points to one overriding reason YouTube is slipping: Alphabet was "slow to implement a mobile video strategy." And not just for YouTube, but across its search, websites, and assorted Network Member properties. Alphabet's slow shift to mobile has since been addressed, but the delay left the door ajar for Facebook to gain some momentum.

The narrowing of the mobile advertising gap can also be attributed to Facebook CEO Mark Zuckerberg. It seems almost laughable now, but just a couple years ago, pundits were expressing their concerns about Facebook's lack of a mobile strategy. Now? Nearly 90% of Facebook's 1.55 billion monthly average users (MAUs) access its network from mobile devices.

Facebook didn't fully commit to video advertising -- mobile or otherwise -- until the middle of last year. Zuckerberg's zeal for mobile was top-of-mind during the video testing phase, and YouTube is feeling the effects now that it's in full swing. The news for YouTube would be even more troubling if the study included the number of mobile video posts on Facebook's Instagram property.

Now that the photo-sharing site is fully monetized, video is quickly becoming king. According to a report that tracked Instagram's ad impressions over the past several months, a whopping 92% of the spots posted on Cyber Monday were video.

There's a ways to go before Alphabet execs begin losing sleep over the declining lead of YouTube in the world of mobile advertising, much like its hold on the top of the digital ad heap. But as Business Insider's report makes clear, it's about time YouTube starts looking over its shoulder, because Facebook's mobile advertising strategy is gaining steam, with no signs of slowing.

Suzanne Frey, an executive at Alphabet, is a member of The Motley Fool's board of directors. Tim Brugger has no position in any stocks mentioned. The Motley Fool owns shares of and recommends Alphabet (A and C shares) and Facebook. Try any of our Foolish newsletter services free for 30 days. We Fools may not all hold the same opinions, but we all believe that considering a diverse range of insights makes us better investors. The Motley Fool has a disclosure policy.