Is Main Street Capital the one to beat?

What happened?
The top-performing BDC has historically pre-announced its year-end earnings expectations. Of the BDCs that have pre-announced, it appears that Main Street Capital's (MAIN -5.11%) results may be among the best in the fourth quarter.

Does it matter?
Certainly -- all earnings reports matter.

Main Street Capital reports that it expects to earn $0.59 to $0.60 in distributable net investment income per share, which excludes non-cash stock-based compensation. Net investment income, which includes these non-cash expenses, should be in the range of $0.56 to $0.57 per share.

So far, it appears Main Street's fourth quarter will be the one to beat. Three other BDCs have already pre-announced their earnings, reporting significantly larger declines at the midpoint. 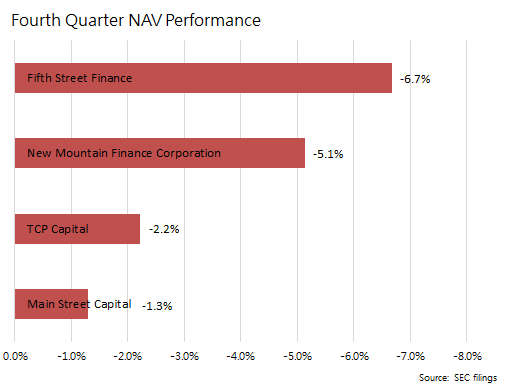 Data excludes impact of special dividends. Data based on the midpoint of NAV estimates.

The decline in Main Street Capital's net asset value is primarily the result of "unrealized depreciation relating to its middle market debt investments during the fourth quarter of 2015." This is consistent with what just about every other BDC has said about its year-end results.

It's worth mentioning that Main Street didn't specifically call out energy-related credits for the decline in net asset value, but its outsize energy and Texas exposure will likely be a key issue on the company's post-earnings conference call.