Revenue and EPS get all the press, but you learn a lot more by digging into the conference call notes for answers.

Every article you read covering Apple's (AAPL 0.23%) earnings call will mention that the company recorded $75.9 billion in revenue last quarter and $3.28 per share in earnings. Those headline numbers are important, but the real insight comes from reading through the company's conference call and getting some extra color on what affected those numbers and the plans Tim Cook and company have for the future. Below are the five best quotes from the call -- four giving investors a look under the company's hood and one that got a laugh out of me.

Aside from the top- and bottom-line figures, iPhone sales volume was easily the most anticipated number from the company's quarterly check-in.

Despite guidance that called for segment growth last conference call, investors were spooked by bearish signals [subscription required] from key Apple suppliers like Taiwan Semiconductor (TSM -1.16%) in the lead-up to the Apple's earnings report.

The company delivered growth for its flagship product, but just barely. Perhaps even more discouraging, the company posted nominal growth without any of the supply issues that affected its ability to get iPhones out the door the prior year. Investors looking for good news from the iPhone segment will be happy to know the average selling price rose to $691, up from $687 in the prior year. 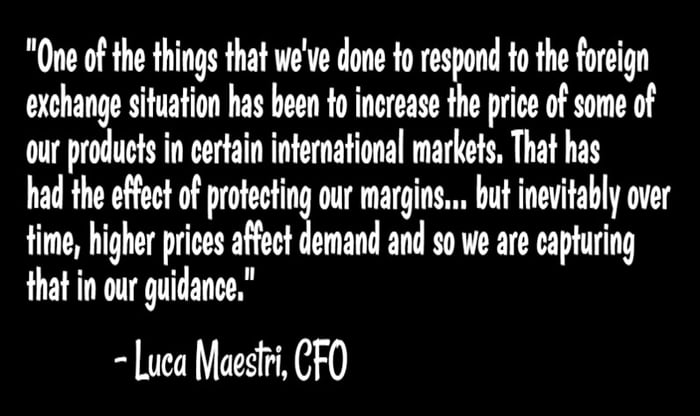 On a constant-currency basis, Apple would have reported 8% year-over-year growth and an extra $5 billion on the top line. Instead, due to the strong dollar, the company and investors had to settle for a 2% bump.

At this point, roughly two-thirds of Apple's revenue comes from outside the U.S. That international exposure can create pricing problems, particularly when sweeping macroeconomic issues like commodities prices undercut some of the world's high-growth countries.

Apple has had to make regional price adjustments in countries that have experienced extreme currency devaluation, but from Maestri's comments, it seems the company could see a ceiling off in the distance -- Apple's brand cachet only offers it so much price inelasticity. 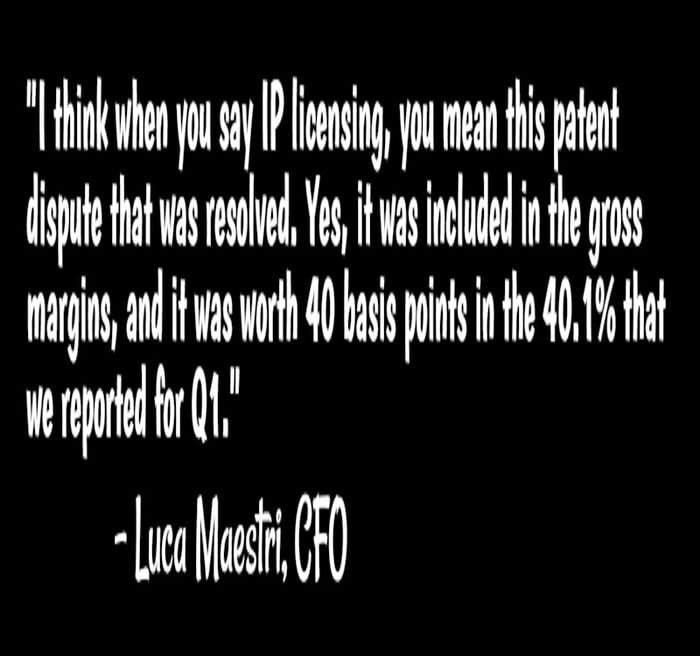 During his financial rundown early in the call, Maestri highlighted the company's 40.1% gross margin for the quarter, a nice bump from the previous quarter's 39.9%. That figure doesn't tell the whole story, though.

In December, Samsung (NASDAQOTH: SSNLF) paid Apple $548 million to settle a long-standing patent dispute over features such as multitouch and tap-to-zoom. The sum was included in the 40.1% companywide gross-margin figure. Backing the payment out, Apple's gross margin for the period was actually 39.7%, representing a drop both sequentially and year-over-year. Apple's guidance for the current quarter reinforces the reality of a sub-40% "true margin." The company expects it to come in between 39% and 39.5%. 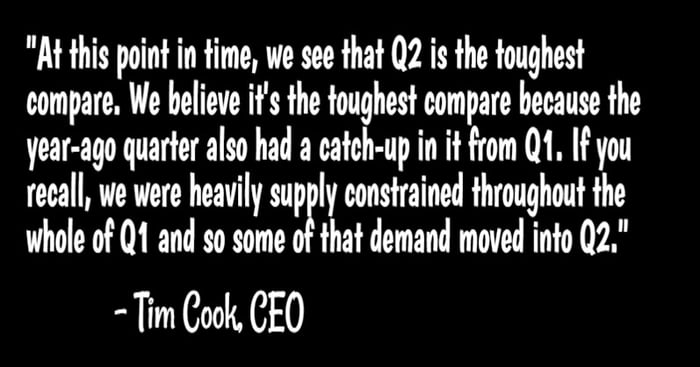 Many speculated Apple's sluggish growth would not be limited to the company's fiscal first quarter. Tim Cook's comments, coupled with quarterly guidance that expects the company to underperform the prior year by $5 billion to $8 billion, reinforced those concerns.

Apple recorded a monster second fiscal quarter last year due to the popularity of the iPhone 6 and 6 Plus, but those numbers were magnified by supply constraints that pushed a lot of sales that would've occurred in fiscal Q1 into Q2.

The outlook might improve toward the end of calendar 2016 when the company's rumored iPhone 7 line will likely launch. Until then, it's clear Apple is trying to moderate expectations as the company continues to go up against tough comps with the only incrementally improved iPhone 6S line.

No, Tim Cook wasn't addressing the specter of Steve Jobs. He was trying to talk to analyst Steve Milunovich from UBS, who seemed to experience technical difficulties when given the opportunity to ask a question... twice. Poor guy.