An explosion at a key supplier's plant has left Toyota's high-tech factories short of parts. Here's how Toyota is coping with the situation.

The global rollout of the all-new 2016 Toyota Prius has hit a snag: A shortage of parts will temporarily close the factory that makes the new hybrid. Image source: Toyota.

Toyota (TM -0.54%) said on Monday that it will halt production at all of its assembly factories in Japan for six days in February because of a shortage of steel used to make parts.

The details: A temporary steel shortage in Japan
Toyota is running short of key parts used to make its vehicles because of an explosion at a steel plant owned by a key supplier.

The explosion, which happened on January 8 at a steel-making plant owned by Aichi Steel Corporation (TYO: 5482), damaged a key furnace and shut down production. That, in turn, left some of Toyota's parts-making operations temporarily short of steel, forcing them to reduce production.

The Aichi plant is expected to be shut down until late in March. The company is moving to replace its lost production, but there has been a gap in supply. As a result, Toyota's car-making factories in Japan will run out of certain key parts within a few days. Toyota said it will close all of its Japanese assembly plants for six days, from February 8 to February 13, to give its parts-making facilities time to catch up.

What it means for Toyota
It means Toyota will lose quite a bit of production -- albeit only for a short period. The company's Japanese assembly plants built about 13,600 vehicles a day in December. At that rate, six days' worth is around 81,600 vehicles.

That shortage will hit Toyota's local dealers the hardest. Toyota is by far the largest-selling automaker in its home market of Japan. But the shortage will be felt elsewhere, too: Just over half (about 55% last year) of the vehicles Toyota produces in Japan are exported.

That number includes all Prius models, including the brand-new-for-2016 Prius that Toyota is in the process of rolling out around the world. That's probably where the shortages will be most visible to dealers and customers.

What it means for Toyota investors
Probably not a lot. The loss of 81,600 vehicles' worth of production is something that will certainly be felt by Toyota (and its dealers in many parts of the world), but it's likely that Toyota will be able to make up the lost production within a few weeks.

Toyota's stock fell (along with shares of most of its rivals) early last month as investors considered the possibility that the growth of new-vehicle sales in both the U.S. and China, the world's two largest new-vehicle markets, could stall in 2016. But the shares recovered to some extent last week. 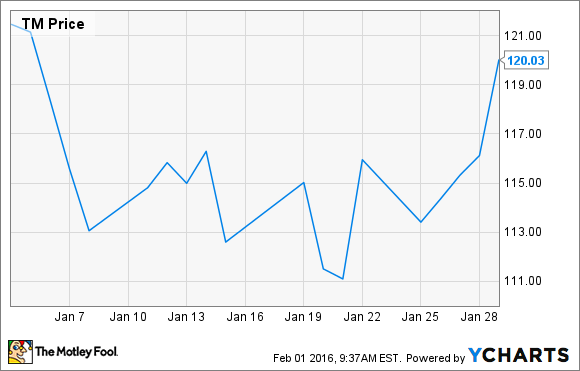 While the plant shutdowns do show the downside of Toyota's vaunted just-in-time production system, in which inventories of parts are kept lean and used up quickly, it's not likely to either force Toyota to change its ways or to dent the company's stock price significantly. Any bumps in the share price that are related to this situation are likely to be recovered once Toyota makes up the shortfall.