In investing, there are always those few stocks that look rather tempting, but for one reason or another you're hesitant to make them part of your portfolio. Perhaps there's a catalyst coming up that you're uncertain about, or perhaps the stocks are a little too expensive, or maybe you just don't have the cash on hand to make the purchase. But these stocks are on your radar for a reason. Chances are they look to be good long-term investments.

So we asked a handful of our contributors to highlight one stock they have on their radar but haven't quite gotten around to buying. Here's what they had to say.

Steve Symington: A little over three months ago, I confessed my waning interest in the prospect of owning shares of Dolby Laboratories (DLB -2.27%). After all, though shares had fallen only slightly since I initially opened an "Outperform" call on the audio technology specialist in Motley Fool CAPS more than three years earlier, they also badly underperformed the S&P 500's 52% total return over the same period. The company repeatedly achieved only modest growth with each passing quarter, as strength in mobile, broadcast, and acquired businesses struggled to offset declines in its consumer electronics licensing business.

Earlier this month, however, I highlighted that Dolby's latest audio and video technologies have enjoyed accelerating momentum, including recent commitments to deliver content mastered in Dolby Vision from the likes of MGM and Universal Pictures (adding to existing agreements with AMC Entertainment (AMC 1.78%) and Disney (DIS -2.60%)), new Dolby Vision-enabled televisions from LG Electronics, and Dolby Atmos soundtracks in Blu-ray titles from Sony Pictures Home Entertainment.

Sure enough, earlier this week Dolby stock popped after the company announced fiscal first-quarter 2016 earnings that handily beat expectations, with Dolby CEO Kevin Yeaman describing "great progress" and "increased momentum" with its new initiatives during the quarter. That said, part of Dolby's earnings beat can be chalked up to share repurchases. And looking forward, Dolby's guidance for the full year calls for earnings per share to decline around 8%, while revenue is expected to rise a modest 5% with most growth weighted toward the back half of the year. In the meantime, current-quarter revenue is expected to decline 1.8%, as slight growth in broadcast will be offset by flat revenue from consumer electronics and year-over-year drops from PC, mobile, and gaming.

As an investor who has watched Dolby struggle to consistently achieve sustained overall growth for the past several years, that's why I'm content watching Dolby's progress from the sidelines for at least another quarter.

Matt DiLallo: Halliburton (HAL -8.69%) has been on my watch list for a while now. What caught my eye is how well it has operated during the current downturn in the oil market. It's business model has proved to be very resilient, with it able to reduce its costs and focus on selling higher-margin technology to keep its margins from sinking too deeply. Further, it has exceptional upside when the oil market finally starts to recover because of its focus on shale, which should be the first market to recover.

That said, the reason I have held off buying the stock is I'm not so sure it can pull of its megamerger with rival Baker Hughes (BHI). Regulators around the world are very concerned that the deal will stifle completion because it will widen the gap between the top two players and the rest of the oilfield-service sector, which is struggling mightily during the downturn.

If the deal falls through, it would cost Halliburton big time. First of all, it has agreed to pay Baker Hughes a $3.5 billion break-up fee, which is 10% of the deal's original value and more than double the typical break-up fee. In addition to that, it has been carrying higher costs during the downturn to not only complete the deal but also integrate it once it closes, which would be more money wasted. Further, the company expected that the combined company would be able to capture nearly $2 billion in annual synergies, which will no longer be possible.

If the deal falls through, Halliburton's stock would be punished. Given the punishment the energy stocks in my portfolio have taken over the past year, it's a risk I'm not willing to take at the moment. So I'll keep watching this one from the sidelines until I see a lot more clarity that Halliburton can get this deal done.

Dan Caplinger: I've been taking a look at Boeing (BA -5.37%) for a long time, as the high-flyer in the aerospace industry has taken advantage of the huge new demand from airlines for next-generation commercial aircraft to update their fleets. Airline companies have earned unprecedented profits in recent years, and the boon from lower fuel costs has also put more money in their coffers with which to consider major capital expenditures. As a result, Boeing's business has boomed, and it has huge numbers of orders for aircraft that will take the company years to produce and fill.

Yet in its recent fourth-quarter earnings release, Boeing gave a less rosy picture of the future than many shareholders had hoped to see. It projected that core earnings per share would fall 10% or more, sending the stock down by 9% in a single day on fears that protracted weakness in the global economy would end the long boom in aerospace.

The price drop has me more interested than ever in the stock. Before I buy, though, I'd like to see signs that the global economy won't fall into a recession that could take the commercial airline industry down with it. But if the fears about a potential overseas financial crisis prove to be overblown, then Boeing would be the first place I'd look to put new capital to work.

Evan Niu, CFA: One stock that's on my radar but not as a potential "buy" candidate right now is Fitbit (FIT). During its short public life thus far, the activity tracker maker has fallen to fresh lows of $16 and change. This has naturally brought its valuation down with it, which is why I'm keeping an eye on it. Shares now trade at "only" 27 times earnings. While that doesn't scream "bargain" by any means, it's a lot cheaper than when the stock traded at nearly $52.

There has been a tendency for the market to compare Fitbit to GoPro (GPRO -1.76%), since both companies recently went public, make popular wearable tech gadgets, and have seen their share prices crushed recently. However, there is one incredibly important distinction between the two. Fitbit's devices have mainstream appeal and adoption of fitness trackers as a product category continues to rise. It's still early days in the wearables market, and Fitbit's unit volumes continue to soar, shipping 4.8 million devices in the third quarter. On the other hand, GoPro is proving to be a niche player, as high-performance wearable action cameras don't appeal to the average consumer.

That being said, GoPro and Fitbit have both had recent lackluster product introductions. GoPro's HERO4 Session has been a disaster, and investors weren't impressed with Fitbit's new Blaze smartwatch. But still, I think Fitbit's prospects are a little better than GoPro's. If the valuation remains compelling and the company can improve its execution a little bit in the months ahead, then it may become a "buy" candidate in my book.

Tyler Crowe: Helmerich & Payne (HP -11.19%) is a company I've had my eye on for a little while now. As an owner and lessor of rigs to oil and gas producers, the company is in a highly competitive industry that's been in the doghouse lately, as demand for rigs in the U.S. is at one of its lowest points in 20 years. 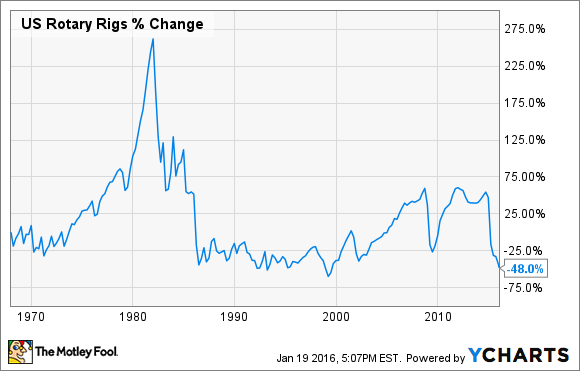 US ROTARY RIGS DATA BY YCHARTS

Despite this tough operating environment, the company has continued to rise above its peers thanks to its fleet of higher-specification rigs that can handle the complex drilling work for shale drilling. Helmerich & Payne's rigs continue to command a premium compared with its direct competitors and have a higher utilization rate, which have allowed the company to remain profitable throughout the downturn in oil prices and not be forced to take on debt to plug any leaks in the balance sheet.

The reason I'm still holding off on buying shares now is that I'm not sure that we have seen the worst for Helmerich & Payne and other oil services companies. The initial budgets that producers have put out thus far suggest that we will see drilling activity slow down even more than last year. If that is the case, then I'm OK waiting to see how the company handles another year of downturn before I make any investment decisions.