Here's a closer look at the key numbers Meritage Homes Corp. reported for 2015 and what management is expecting going forward.

Meritage Homes Corp. (MTH -1.45%) is one of the 10 largest homebuilders in the U.S., and reported a strong finish to 2015, announcing fourth-quarter and full-year financial results on Jan. 28. Here's a closer look at its financial performance, as well as some key metrics that help understand how the company is performing.

We will also take a closer look at management's comments about the long-term prospects for the homebuilder and the goals management has set.

Earnings starting to bounce back after tough comp year and seasonal challenges
As you can see, Meritage reported an 11% decline in earnings per share for the full year, but this was expected, as the company saw both outsize profits in 2014 due to home prices appreciating quickly and benefited from low-cost land it acquired in the years before.

And while management was clear coming into 2015 that earnings would likely fall for the full year, there were additional things that weighed on profits in 2015.

... it's not just one builder that feels that, it's all of us as an industry that feel it. So then we all are coming out at the same time trying to catch up at the same time. So it creates a real acute pressure on trade capacity that your work through. And we're starting to see, as we're through that, now bearing another terrible weather event, I think the trade capacity can handle more, but it's not completely resolved. But that weather created a major disruption in those two markets.

This was supported by other homebuilders. KB Home (KBH -1.39%) CEO Jeffrey Mezger said that KB's homebuilding production in Texas and Colorado was stalled for three weeks or more, and that trade labor capacity kept them from delivering unit goals in those markets as well.

Backlog growth and working toward 10,000 homes per year
Sales and home order growth slowed slightly in the fourth quarter, but Meritage Homes entered 2016 with a $1.1 billion backlog, up 34% from $846 million to start the year. The average sales price also steadily increased, reaching $404,000 in the fourth quarter and $398,000 for the year.

However, that number could start declining at some point in 2016, as the company shifts its strategy a little, increasing the number of entry-level homes that it builds.

Looking ahead
The U.S. housing market continues to recover from the Great Recession, but is probably just now returning to sustainable levels after several years of below-replacement level new housing starts: 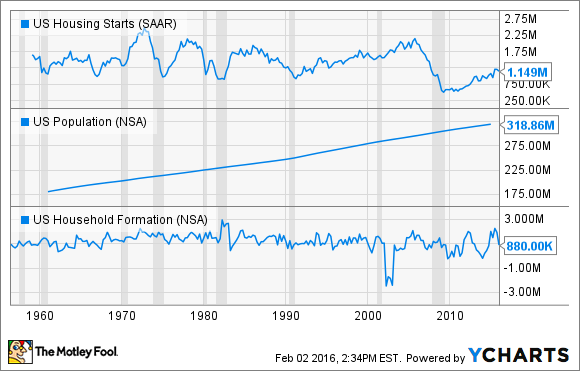 Most economists and housing experts say that the U.S. needs about 1 million new homes each year simply to replace units lost, and won't support the housing needed for population growth and new households being formed.

Put it all together and it would seem that the housing market should be easily able to support Meritage's growth targets over the next several years. Whether the company can effectively drive better profits from those increased home unit sales is the big question that only time will tell.