Please ensure Javascript is enabled for purposes of website accessibility
Log In Help Join The Motley Fool
Free Article Join Over 1 Million Premium Members And Get More In-Depth Stock Guidance and Research
By Adam Galas – Feb 2, 2016 at 8:55AM

With its share price badly beaten down by the oil crash find out if now is the time to buy one of the highest-yielding dividend stocks in America.

With the oil crash having crushed so many energy stocks, even steady income payers such as midstream MLPs, dividend lovers might be understandably nervous about investing in this industry. Take, for example, ONEOK Partners (OKS) and its general partner, ONEOK (OKE -1.42%). 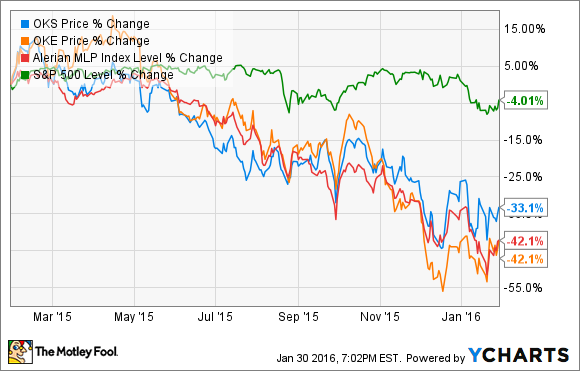 Do these two pipeline investments represent an incredible long-term income opportunity? Or is the market right to punish them so badly? To help you decide if ONEOK Partners and ONEOK deserve a spot in your diversified income portfolio, let's look at three important factors that are likely to determine whether ONEOK can supercharge your portfolio in the years to come.

Both ONEOK Partners and ONEOK are trading at substantial historic discounts, both with respect to yield and price-to-operating cash flow. However, any time the market offers such high yields, one must carefully examine the business model and payout profile to see whether its cash flows are sufficient to maintain the current payout, both now and in the future.

Upon closer inspection it becomes obvious why Wall Street is valuing ONEOK at such distressed valuations.

While ONEOK's coverage ratio seems to indicate that its dividend is sustainable, keep in mind that ONEOK derives its cash flow from the distributions and incentive distribution rights fees it receives from its MLP. This means that should ONEOK Partners cut its payout, its general partner would probably have to do so as well.

The reason for ONEOK Partners' difficulties in covering its distribution (thus explaining the low projected payout growth rates) is because of relatively high exposure to commodity prices, especially because of natural gas liquids, the prices of which are at multi-year lows because of both a glut of natural gas and liquids-rich oil from which they're derived.

On Nov. 3, ONEOK's management reassured investors that new upcoming projects will, assuming energy prices don't decline further, result in a coverage ratio of 1.0-plus and 1.3 for the MLP and GP, respectively, in 2016.

However, as seen in recent weeks, energy prices are incredibly volatile and could very well fall to levels that invalidate management's guidance so investors should take such reassurances with a grain of salt. That being said, ONEOK does have two things working in its favor that might make these two investments attractive high-yield (though high-risk) investments. 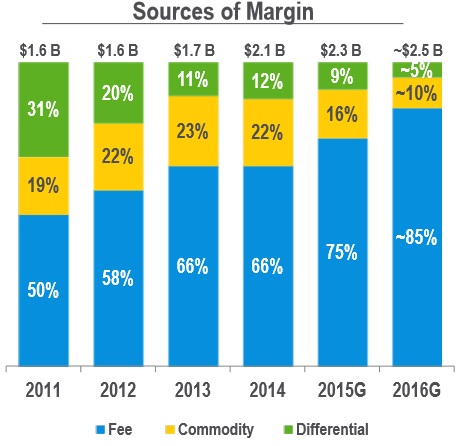 ONEOK is steadily moving away from commodity-sensitive contracts and focusing on more steady fee-based agreements. This includes an increased focus on natural gas pipelines, such as the upcoming Roadrunner pipeline, which has a 25-year contract to export natural gas to Mexico starting in Q1 of 2016.

Natural gas represents ONEOK's best business, both because 96% of its margin is fee based and because its volumes are demand based. This means that pipeline volume is being driven by customers buying gas rather than producers drilling and producing it, which minimizes the risk to cash flow should gas prices stay cheap or fall further.

Continued access to growth capital -- at least for now

Normally you want to see a midstream MLPs leverage ratio below 4.5, since this is one of the most important factors that credit ratings look at when rating pipeline operators. WhileONEOK's leverage ratios are higher than this, they are below the industry average of 6.6.

This means that ONEOK should still have some access to debt markets, which is important given that low share and unit prices have made funding growth or debt refinancing through equity much more expensive. Combined with increasing debt costs in a potentially long-term rising interest rate environment, this could drive its weighted average cost of capital higher than its return on invested capital, which could make future investments unprofitable.

That being said ONEOK does have some time for energy prices to recover because, on Jan. 11, ONEOK announced a new three-year, $1 billion unsecured loan that management claims will mean ONEOK won't have to tap the debt or equity markets until "well into 2017."

Bottom line
ONEOK Partners and ONEOK may not be the highest-quality midstream MLP in the industry, but its recent debt offering gives the MLP breathing room (at least in 2016) to continue growing its cash flow in the hope of securing and potentially growing its distribution once energy prices recover.

That said, potential investors need to realize that an investment in ONEOK is highly speculative and largely dependent on a recovery in commodity prices, especially oil and NGLs, by mid-2017, when ONEOK will probably once more have to raise capital. However, should energy prices fall in 2016, be aware that management's optimistic guidance may fall far short of expectations and result in potentially painful payout cuts for both investments.