A stumble by a competitor working on a similar approach to Alzheimer's disease treatment is weighing down shares. 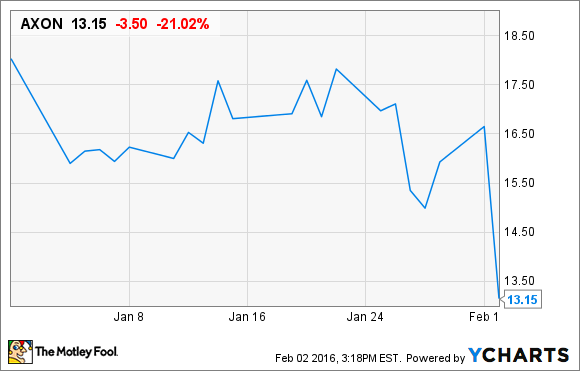 So what: On Feb. 2, reports surfaced that Pfizer had terminated research on PF-05212377, a drug that attempts to increase acetylcholine levels by inhibiting the 5-HT6 receptor.

Now what: Clinical-stage Alzheimer's disease drugs have an extraordinarily poor track record of success with about 99% of them ending up in laboratory waste baskets. Therefore, the news of Pfizer's stumble isn't too surprising.

However, investors may not want to draw a straight line between Pfizer's outcome and the potential outcome for RVT-101.

Pfizer's drug trial was for use in patients with neuropsychiatric symptoms that are notoriously tough to treat and PF-05212377 was dosed at 30 mg per day.

Meanwhile, Axovant Sciences phase 3 trials excludes patients with a history of significant psychiatric illness and that could mean that the patient populations studied in the two trials is different enough to produce a different result. Additionally, RVT-101 is being dosed at a higher 35 mg level than Pfizer's drug, which could boost efficacy.

Axovant Sciences also has a second primary endpoint that will be measured using Alzheimer's disease cooperative study-activities of daily living scale (ADCS-ADL) that wasn't used by Pfizer in its study.

Because the two trials have differences, it's uncertain how RVT-101 will pain out. However, given that investing in Alzheimer's disease drugs is a big gamble, Pfizer's setback does make Axovant Sciences more risky than it already was and for that reason, only the most aggressive of buyers might want to consider investing in the company until data from RVT-101's Mindset trial comes out next year.

Todd Campbell has no position in any stocks mentioned. Todd owns E.B. Capital Markets, LLC. E.B. Capital's clients may have positions in the companies mentioned. The Motley Fool has no position in any of the stocks mentioned. Try any of our Foolish newsletter services free for 30 days. We Fools may not all hold the same opinions, but we all believe that considering a diverse range of insights makes us better investors. The Motley Fool has a disclosure policy.