Please ensure Javascript is enabled for purposes of website accessibility
Log In Help Join The Motley Fool
Free Article Join Over 1 Million Premium Members And Get More In-Depth Stock Guidance and Research
By John Bromels – Feb 2, 2016 at 8:15AM

The industrial stalwart may have the best dividend in the sector, but that wasn't enough to save it last year. Will this year be any different?

This year has started off rough for the markets. The S&P is down more than 5% as of this writing. 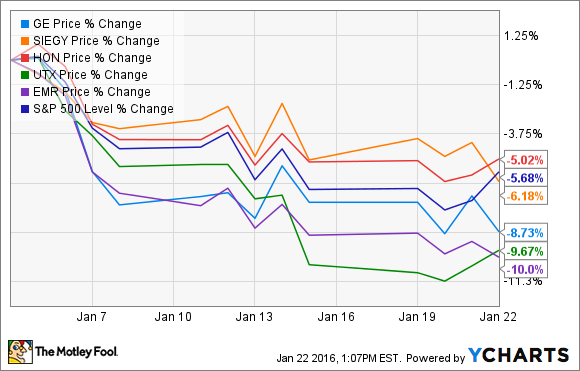 Only Honeywell (NYSE: HON) is beating the market right now, and just by the hairs on its chinny-chin-chin. Emerson is the worst performer of the lot, with a double-digit loss so far this year. But you should think twice before buying it on the hopes of a turnaround.

What's past is past
Emerson underperformed all of its industrial conglomerate peers in 2015, even managing to lose to the lackluster S&P 500 by nearly 22 percentage points: 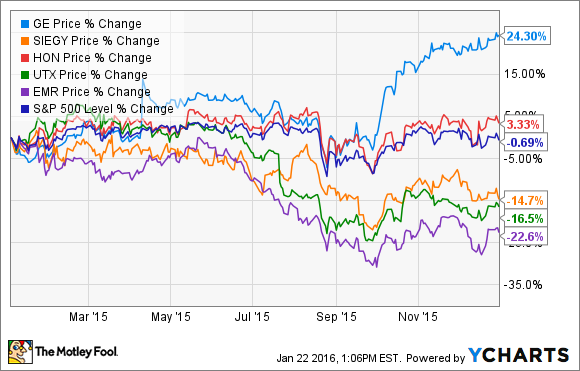 But for large stalwarts like these, you have to remember that stock price appreciation is only part of the overall investment equation. There's also the dividend to consider, and Emerson's is the best in its class:

Of course, part of its stellar yield is due to its price declines. (Siemens, also a victim of poor performance last year, has a similarly high yield at present.)

But even a high dividend yield can't always make up for poor price performance. Here's a chart of the stocks' total returns in 2015, which factors dividends into the equation. Once again, you can see that Emerson is dead last: 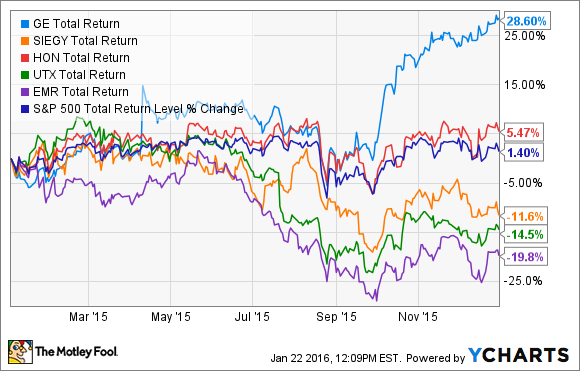 The company specifically blamed oil prices, saying that "persistent low oil and gas prices reduced capital and operating spending, especially in upstream markets." This is an industrywide issue, with companies such as General Electric and Honeywell both seeing declines in divisions with high oil and gas exposure in recent quarters.

Unlike GE and Honeywell, however, earnings in all of Emerson's divisions -- even those without significant oil and gas exposure -- declined in FY2015. The segment that fared the worst, for example, was Network Power, which saw its earnings halved. By contrast, GE and Honeywell have divisions whose performances are helping to offset the negative effects of oil and gas prices on the company's overall results.

No end in sight
While GE and Honeywell are both anticipating growth in 2016, despite a sluggish economic environment, Emerson hasn't made any such predictions. The company had a strong start to 2015, so its YOY comparisons are likely to be negative in the first couple of quarters of 2016, according to Chairman and CEO David Farr in the company's latest earnings call:

[W]e're ready for, what I would say, the first negative quarter and then the second negative quarter, which I believe underlying sales could be down somewhere in the 5% to 6% range, and then we'll start coming out both from an easy comparison but also seeing some stability in the markets we serve.

Investors' takeaway
In spite of Emerson's stellar dividend -- and it really is stellar -- there's not a lot to be optimistic about for Emerson in the near term. When the best you can look forward to is stabilization of YOY numbers because your prior-year numbers are so dismal, that's pretty weak sauce for investors to stomach. And if things in the oil markets don't turn around, as anticipated? Yikes.

The outlooks for GE and Honeywell seem more upbeat, although both are making projections based on optimistic 2016 oil price numbers. GE is reinventing its entire company by divesting large portions of its GE Capital financial business portfolio and selling its storied Appliances unit. Honeywell is coming off six consecutive years of double-digit earnings growth, with predictions that growth will continue. Emerson is coming off an exceptionally weak year with a plan to "try to control what [it] can control."

What you should control are your expectations for Emerson in 2016.

John Bromels has no position in any stocks mentioned. The Motley Fool owns shares of General Electric Company. The Motley Fool recommends Emerson Electric. Try any of our Foolish newsletter services free for 30 days. We Fools may not all hold the same opinions, but we all believe that considering a diverse range of insights makes us better investors. The Motley Fool has a disclosure policy.