Please ensure Javascript is enabled for purposes of website accessibility
Log In Help Join The Motley Fool
Free Article Join Over 1 Million Premium Members And Get More In-Depth Stock Guidance and Research
By Reuben Gregg Brewer - Feb 3, 2016 at 8:15AM

LydondellBasell is entering 2016 with a few risks that you should know about...

LydondellBasell Industries' (LYB 0.68%) shares have been heading broadly lower since hitting a peak in mid-2014. It's no coincidence that the shares started to falter at the same time as oil did. But that's just one of three reasons why LyondellBasell stock could fall further.

Oil and gas
Natural gas is a key input for LyondellBasell, so the fracking boom that led to a steep dive in the price of that commodity was welcome news. What was even better news was that oil prices didn't follow natural gas lower -- many of the diversified plastics, chemicals, and refining company's competitors use more expensive oil. So, for a time, LyondellBasell had a big cost advantage.

That all started to change in mid-2014, when oil prices began a painful decline -- a trend that's continued into 2016. At the end of 2015, LyondellBasell still had an advantage on the cost front, since the spread between the price of oil and gas remained relatively wide, just not as wide as it had been before. But, according to the company, based on the historical spread between 1999 and 2009 oil should be in the $20 to $25 range, a level that it appears to be approaching. If oil does fall to those levels and stay there for any length of time, LyondellBasell's cost advantage will be greatly diminished. 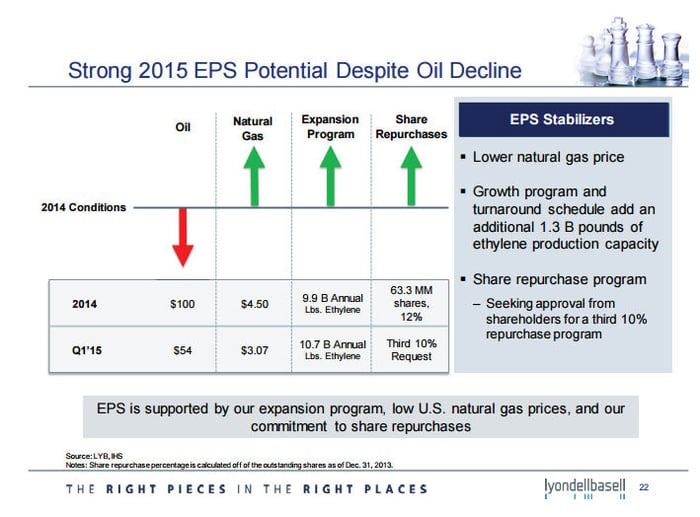 Oil, a problem worth focusing on. Source: LyondellBasell.

This is probably the most obvious risk shareholders have to pay attention to right now. But don't just watch oil, as rising natural gas prices could shave the oil to natural gas spread, too, and have a similar impact on LyondellBasell's business.

Costs going up
Another issue to watch closely is costs. The oil and gas spread is a part of this, but it goes deeper. Since emerging from bankruptcy and coming public again in 2010, the company has been keenly focused on keeping its expenses in check. To give you an example, sales, general, and administrative expenses accounted for just 2.3% of sales in the third quarter of 2015. DuPont's (DD) figure was around 20%, the extreme high end, but Dow Chemical's (DOW) was also notably higher at about 6%.

While you can see where Dow and DuPont might benefit from merging in an attempt to cut costs, you can also see where LyondellBasell has managed to take cheap to an impressive level. But if it can't maintain its costs at industry-leading levels, then there's a potential problem. And I'd expect investors to react poorly if the company's costs start to move higher.

Growing the business
The third issue that investors should watch is growth. Acquisitions are one part of this. For example, LyondellBasell recently agreed to buy an Indian company in the auto space. It sounds like a good deal, since it materially increases the company's presence in that industry in India, an emerging economy that's moving up the socioeconomic ladder. But more bolt-on deals like this will be needed over the long term. International purchases can be hard to consummate and assimilate. So keep an eye on this, as a bad deal could lead investors to cut and run.

However, you'll also want to monitor internal growth projects. Here, the company is currently working on what will be one of the largest propylene oxide and tertiary butyl alcohol plants in the world. This Texas-based project is the single largest capital investment in LyondellBasell's history, according to CEO Bob Patel. You don't necessarily need to know what's being made; you need to understand that this is a big project. If anything goes wrong, LyondellBasell shareholders could get spooked. And it isn't the only internal growth initiative the company is working on right now, either.

If the company runs into troubles with acquisitions or organic growth initiatives, investors are likely to view the development as a negative.

Three to watch
So if you're watching LyondellBasell, you'll want to pay close attention to the oil/gas spread, the company's ability to keep its costs at industry-leading levels, and how well it executes its growth plans, particularly on the acquisition and capital investment fronts. Troubles in any one of these three areas could be reasons LydondellBasell's stock might fall even further than it has already.