The incredible success of Star Wars didn't help Disney's stock, as it has continued dropping in January. These other coming profit boosters are more reasons to buy.

Walt Disney (DIS 0.19%) stock has continued to slide in December and January, regardless of the box office record-breaking success of Star Wars: The Force Awakens. Need more convincing to bet on Disney beyond Star Wars? Here are three additional reasons Disney stock looks like a buy now.

1: ESPN Streaming
Disney's Media Networks segment is its largest and contributes about 43% of Disney's total revenue. ESPN makes up most of that. As consumers cut the cord and get rid of cable, ESPN has lost 7 million subscribers in the past two years and is now down to 92 million. This decline in subscribers seems to be the main reason Disney stock has been hit so hard over the past few months.

Disney isn't just sitting back and watching its largest property decline. ESPN is focused on maintaining its market leadership in "e-sports," getting in front of consumers who are now consuming their sports content online. According to ESPN, the e-sports audience has grown 53% from 2012 to 2014, and ESPN is increasing the ways fans can get premium sports experiences by streaming ESPN content instead of watching it on cable. 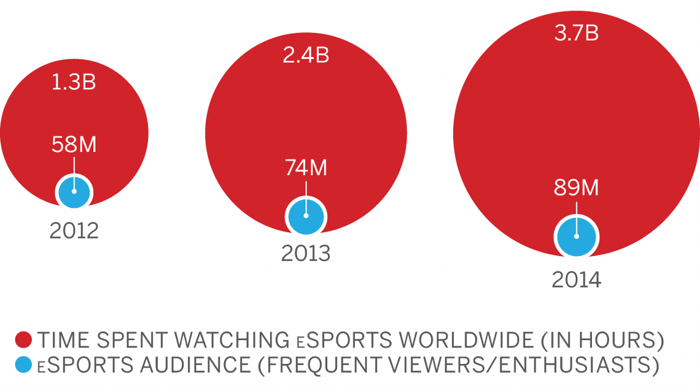 Consumers can already subscribe to an ESPN package on Sling TV, Roku, and Sony's PlayStation VUE. Disney is also reportedly in talks with Apple to get the option available on Apple TV. As Disney continues to make streaming a seamless choice for consumers who want to watch live sports but don't want to subscribe to expensive cable bundles, subscriber revenue is likely to start growing again in the coming months and years. This is especially true as ESPN expands to more countries, such as India, where ESPN recently won rights to stream the Indian Premier League of cricket, the most watched sport in India.

2: Shanghai Disneyland
Theme parks are Disney's second largest segment, representing about a third of total revenue. Almost all of Disney's parks worldwide posted increased visitors and revenue during fiscal 2015, and the segment overall reported a 14% rise in income during that time. Upgrades in the next two years, including exciting new rides and features, will help that worldwide theme-park growth continue.

The most exciting boost to this segment is going to be the opening of Shanghai Disneyland in June. This $5.5 billion project sitting on about 1,000 acres of land is projected to be the most attended Disney park in the world in its first full year open, with 25 million expected visitors annually, compared with about 20 million expected at Orlando's Magic Kingdom. Regardless of China's current economic troubles, the country still has a massive and growing middle class with families that make up a very attractive market for Disney.

3: New movies other than Star Wars
Star Wars VII was a huge success financially, and the impact to fiscal 2016 income is likely to be substantial. However, that's only one movie in a long line of upcoming films, and many of the them look like box-office successes in waiting. Here's every Disney movie coming out in 2016:

Studio Entertainment, Disney's third largest segment, is only responsible for about 15% of Disney's total revenue. But it produces the characters and stories that help to drive more theme park and media network revenue as well. It's also one of Disney's fastest growing segments by income, up 27% in fiscal 2015 year over year.

Time to bet on Disney stock
Disney's recent stock price decline means that shares are now trading at less than 15 times forward-looking fiscal 2017 average earnings estimates. With the massive success of Star Wars VII, Disney is likely to report very impressive numbers in its next quarterly release that will make the stock look like a steal. But Star Wars is just one of many reasons Disney looks like such a great buying opportunity now.

The decline in ESPN and other cable network revenue is daunting and likely to continue worrying analysts and investors in the coming quarters, but the stock seems oversold on the concern that Disney won't be able to pivot toward streaming ESPN. Add Shanghai Disneyland's opening and the rest of the movies Disney is producing in 2016, and its clear that Disney is firing on cylinders.

Bradley Seth McNew owns shares of Apple and Walt Disney. The Motley Fool owns shares of and recommends Apple and Walt Disney. Try any of our Foolish newsletter services free for 30 days. We Fools may not all hold the same opinions, but we all believe that considering a diverse range of insights makes us better investors. The Motley Fool has a disclosure policy.