Energy Transfer Equity (NYSE:ET) can be a very complex company to understand because its income is derived from its ownership interests in a number of affiliated MLPs. For a lot of investors, this complexity alone is a turnoff. However, it actually makes it harder for its MLPs to grow because it adds to their costs, which is why investors might want to look at some better options.

The following slide details the organizational structure of Energy Transfer Equity once it closes its acquisition of Williams Companies later this year: 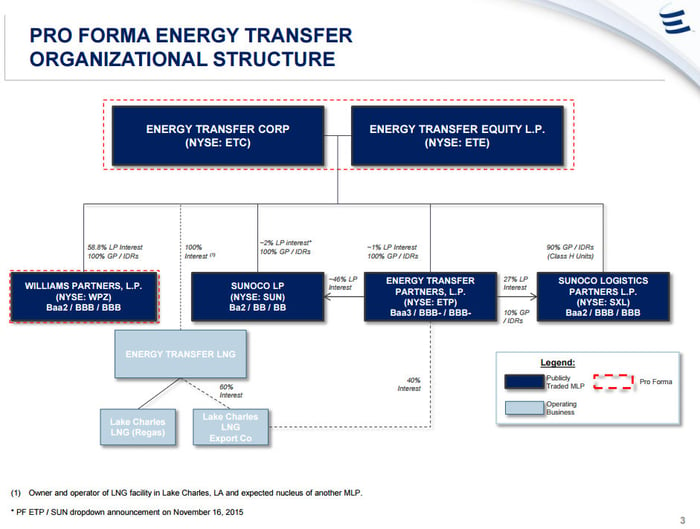 The above chart makes it a bit more straightforward to understand Energy Transfer Equity because it's really an investment in its affiliated MLPs. At the moment, this includes Energy Transfer Partners (NYSE: ETP), Sunoco, and Sunoco Logistics Partners. However, there is more to the story here, which is best left to the company to explain.

In one of its recent press releases, Energy Transfer Equity says that it "owns the general partner and 100% of the incentive distribution rights (IDRs) of Energy Transfer Partners and Sunoco, approximately 2.6 million ETP common units, approximately 81.0 million ETP Class H Units, which track 90% of the underlying economics of the general partner interest and IDRs of Sunoco Logistics Partners, and 100 ETP Class I Units." While that's pretty tough to comprehend, what it means is that Energy Transfer Equity is pulling fees from its MLPs through a variety of different sources.

In one sense, that's a pretty good deal for Energy Transfer Equity; however, as I'll show in a moment, midstream companies that have a much simpler ownership structure have a big strategic advantage over this complex peer.

The one-stop shops
That simpler model is the stand-alone master limited partnership, which includes midstream companies that have done away with the complexity of the general partner by acquiring this entity. The top three in this category are Enterprise Products Partners (NYSE:EPD), Magellan Midstream Partners (NYSE:MMP), and Buckeye Partners (NYSE:BPL).

Magellan Midstream Partners was the first in the group to simplify its structure after it acquired its general partner in 2009. At the time, the company said that the transaction would lower its costs of capital to make it more competitive for future acquisition and expansion opportunities, as well as reduce the administrative costs associated with operating a second publicly traded entity. It was followed the next year by Buckeye Partners and Enterprise Products Partners; both companies cited the lower capital costs they'd incur after buying out their general partners.

What these companies found was that paying out the general partner fees and incentive distribution rights were costing their investors a lot of money in the long run. These fees to their general partners left them with not only less cash to pay their own investors, but virtually no cash to reinvest into their businesses and fund growth projects.

Instead, they had to turn to the capital markets for this cash, issuing more units or debt to raise the cash needed to fund growth investments. This was not only really dilutive to current investors, but increased the hurdle rate for future growth. Not only that, but issuing debt and equity has become much harder to do in recent months because of the downturn in the energy market.

Today, these companies actually have a competitive advantage over peers such as Energy Transfer Partners that are still tied to their general partner because they don't need to access the capital markets quite as frequently. That's clear from the following chart, which shows a much slower growth rate for outstanding units: 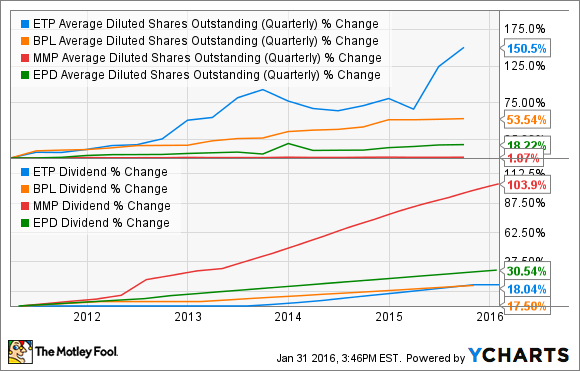 Further, not only have all three issued far fewer units than Energy Transfer Partners, but each has grown their distributions by a rate that's at least as fast, if not faster, than Energy Transfer Equity's namesake MLP. This trio has also issued less debt because they are retaining more cash, which has resulted in each maintaining an investment grade credit rating, with Enterprise Products Partners and Magellan Midstream both rated BBB+, and Buckeye Partners is BBB-.

Investor takeaway
Energy Transfer Equity is one of the more complex energy companies because it's the general partner to a growing number of MLPs. That adds a lot more work for investors, and also makes it harder on its own MLPs to compete. Investors who want to avoid this added complexity, and all that goes with it, should instead take a look at stand-alone MLPs Enterprise Products Partners, Magellan Midstream Partners, and Buckeye Partners.